Buffett no longer a fan of local newspapers. And other media tidbits of the day.

Kenny: 18C complaint a ‘vexatious stunt’. Re-elected libertarian Senator David Leyonhjelm is using the 18C provisions of the Racial Discrimination Act to lodge a complaint against Fairfax chief political correspondent Mark Kenny, who described him in passing as an “angry white male”. That article began by describing Leyonhjelm as a “boorish, supercilious know-all with the empathy of a besser block” — but Leyonhjelm can’t really argue that’s racially discriminatory. The article blasted Leyonhjelm and others for holding that offence is only in the mind of the person offended, and therefore 18C should be abolished.

Asked about the case this morning, Kenny told Crikey: “Q.E.D.”

“In its rank hypocrisy, this vexatious stunt not only proves the point of my piece, it betrays the Senator’s disregard for the real work of the Human Rights Commission.”

The Human Rights Commission has the power to throw out vexatious complaints — one would presume that’s what they would do here. — Myriam Robin

Unlike the regular home pages, these subscriber-only websites will be updated at midnight, noon and breaking news events (as opposed to continuously as occurs with the main websites) and are meant to showcase the type of content subscribers are after.

Comparing the Age’s regular and Subscriber First websites this morning sees both prioritise Rio coverage, but beyond that, the subscriber had far more of a focus on Victorian stories, political analysis and exclusives. Missing from the sparser ‘Subscriber First’ homepage — Usain Bolt’s mother wanting to find him a wife, weather news, and an article on the good things about flying business class.

“Our subscribers are seeking to be informed and challenged by quality news breaking, analysis and commentary and different storytelling,” said Fairfax’s new subscriber editor David Rood.

“Subscriber First is not afraid to place a premium and priority on analysis and commentary to complement the news as it breaks. My aim is to curate that content and help subscribers make sense of the issues that matter in their city and across the world.”

The websites are one of a series of initiatives Fairfax is rolling out to appeal to subscribers. Also part of the plan are curated newsletters. One, by Good Weekend editor Amelia Lestor, will spruik the coming weekend’s best content on Friday afternoons (it’s already been running for six weeks), while the editors-in-chief of both papers are also to start weekly emails to subscribers that sound a lot like what Michael Stutchbury’s been doing at the Fin for yonks.

Sage flips his prophecy. Back in 2012, Warren Buffet was an still an enthusiastic supporter of print, putting his money (US$142 million) where his mouth was for a swag of small regional papers in the US.

Four years on though, Buffett has abandoned that belief and reverted to his 2007 gloom, and now thinks newspapers are duds, that their time is past. For all the support he received from existing newspaper owners for defending them, his latest comments will be ignored, including by those executives and others attending the September 2 Future Forum in Sydney being promoted by the NewsMediaWorks industry group. The conference could have done no worse by inviting Buffett to explain his latest change of heart which was revealed in an interview last week with Politico. Buffett explained why he has become super pessimistic about print.

“Newspapers are going to go downhill. Most newspapers, the transition to the internet so far hasn’t worked in digital,” he told Politico.”The revenues don’t come in. There are a couple of exceptions for national newspapers — The Wall Street Journal and The New York Times are in a different category. That doesn’t mean it necessarily works brilliantly for them, but they are a different business than a local newspaper. But local newspapers continue to decline at a very significant rate.”

“And when circulation goes down, advertising is gonna go down, and what used to be a virtuous circle turns into a vicious circle. I still love newspapers! You’re talking to the last guy in the world. Someday you’ll come out and interview me, and you’ll see a guy with a landline phone, reading a print newspaper.”

What to say about female athletes. In the sports pages of today’s Daily Telegraph (no wonder so many say they’ll miss SBS Zela) … 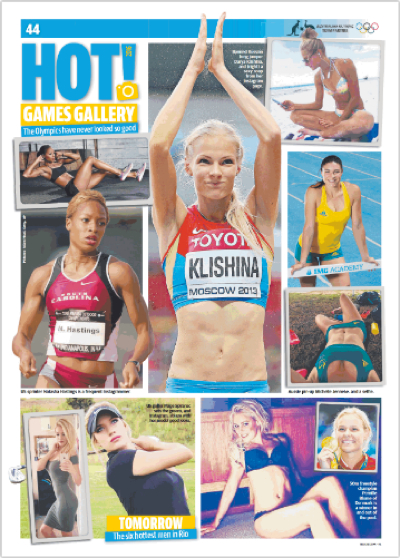 Foxtel in a bind. Foxtel’s owners, News Corp and Telstra, took extraordinary steps to restrict cash outgoings by the pay TV giant in the year to June as it battles stronger competition from streaming video services such as Netflix and Stan (owned by Fairfax and Nine) as well as Optus. It also faces a possible major restructuring and possible float by the owners next year, which could also account for the change in policy as the duo seeks to improve the financial picture at Foxtel from past years.

The moves by the shareholders and Foxtel management (which are appointed by News Corp) are detailed in the brief accounts for the pay TV operator included in News Corp’s 2015-16 annual report filed with the US Securities and Exchange Commission early Saturday, our time. Chief among the moves was the slashing of cash distributions from Foxtel to News and Telstra, as well as cutting the interest rate (and dividends) on a controversial $902.6 million in shareholder loans. As well, Foxtel decided to extend the depreciable life of its assets by 50% — from four to six years, which had the impact of cutting the company’s depreciation bill and boosting profits. And the accounts also reveal a nasty “temporary” multimillion-dollar impairment of its shareholding in the Ten Network. But the most important move was cutting cash distributions and the interest rate and dividends on the shareholder loans. — Glenn Dyer

Front page of the day. More current and ex-servicemen have killed themselves this year than have died in Australia’s 13 year-military engagement in Afghanistan, reports the Herald Sun’s Ruth Lamperd … 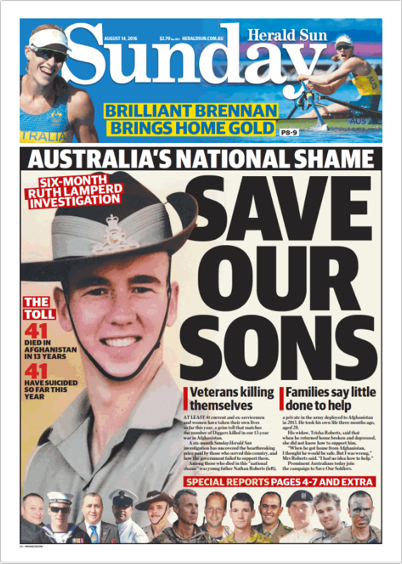 …as distinct from his very existence? A carbuncle on conscience.