The athletes are understandably appalled.

Daily Beast and one of its journos in Rio covering the Olympics Nico Hines is under fire today over an article Hines penned where he went to investigate athletes hooking up during the Rio Olympics.

The article, originally titled “I got three Grindr dates in an hour in the Olympic village” was widely criticised on Twitter and elsewhere, with Slate calling the piece “exceedingly gross and bizarre” Grindr-baiting. Hines, unable to get straight women using apps like Tinder, gloated about being able to organise meet-ups more instantaneously on Grindr, despite admitting to his audience that he is straight with a wife and child. Hines also goes into detail about the sports played by several of the people he chatted to, including what countries they are from. It doesn’t take much effort to figure out exactly which athletes he is talking about.

The difficulty comes because in Hines’ original piece, the language used made it sound as though Grindr was a safari adventure for him, and not as it actually is, which is a safe space for gay men to meet other gay men. While straight athletes have the luxury of being able to meet and flirt with each other at the village bar with no danger, gay athletes, particularly those from countries where they face persecution for being gay, use apps like Grindr for even a slightly better chance at safely being able to meet other gay people.

Gay Olympians have slammed the article, with US athlete Gus Kenworthy saying that Hines had “basically just outed a bunch of athletes in his quest to write a shitty article where he admitted to entrapment”. 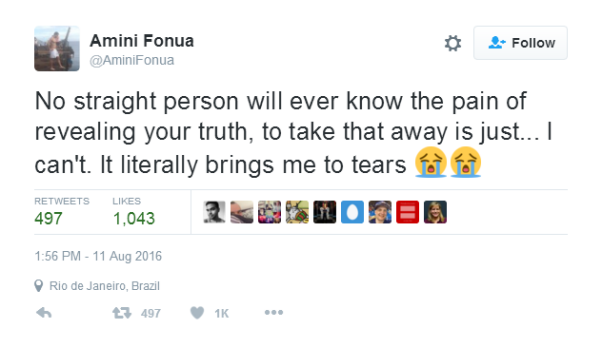 Daily Beast editor John Avalon heavily edited the article overnight removing a number of the references to the athletes, re-titling the piece, and changing the overall tone of the article, but some were still calling for the article to be removed entirely. Avalon claims that it wasn’t intentionally designed to target gay athletes, instead victim-blaming them for responding to Hines in the first place.

“It just so happened that Nico had many more responses on Grindr than apps that cater mostly to straight people, and so he wrote about that. Had he received straight invitations, he would have written about those.“

The article was removed entirely with Avalon saying the publication was taking “an unprecedented but necessary step” because the article did not uphold Daily Beast‘s values.

If the athletes in question genuinely felt they had been put in dangerous positions by a story alluding to their dating activity, then maybe they should be thankful to the journalist for demonstrating how exposed they had made themselves. If incidental details from their profiles can identify them on this public dating app, then any potential oppressors can be doing exactly the same thing and going a lot further to cement the identities.

But instead, various commentators blame the journalist for exposing the athletes’ own lack of self awareness. If this was not such a sad indictment of the emptiheadedness of these commentators and spokespeople, it would be a great comedy.

They should all be thanking him for his (stupid, yellow-press) article.