Where was the ASD? As we all know, the Australian Signals Directorate is now busy investigating the circumstances around Tuesday night’s census debacle. But didn’t ASD sign off on the security of the ABS and IBM systems before the census went ahead, even if it didn’t vet the capacity of the census site? That, after all, is one of the ASD’s core roles — it is the internal government IT security guru, in charge of approving IT and comms hardware and software used by government agencies and politicians to make sure they are secure. Or did ABS go ahead without an ASD assessment? If the former applies, should we be trusting ASD to, in effect, investigate something it approved? The question has particular point because while ASD itself is highly regarded, Crikey understands that there are concerns at senior levels within the Australian Intelligence Community about the head of ASD, Defence bureaucrat and former Stephen Smith adviser Dr Paul Taloni, and his responsiveness. Given the systemically important role ASD has within government, such concerns are a worry at a time when the community and politicians are suddenly very focused on information security.

Tomorrow’s news today. Cory Bernardi has singled out an organisation that has existed for four years in the latest criticism of LGBTI children receiving different treatment from other children.

The Pinnacle Foundation, which lists Michael Kirby and Kerryn Phelps as its patrons, has given scholarships to LGBTI students facing disadvantage for many years and announced its latest round of applications recently, causing it to be listed in conservative Bernardi’s weekly newsletter “Your Weekly Dose of Common Sense”. The newsletter features a section called “Things that make you go hmm …”, in which he lists news stories that have piqued the attention of the conservative, free-speech loving, nanny-state hating senator. He wrote:

“In other news, The Australian cartoonist defends his latest ‘insulting’ work, more scholarships are created based on sexuality, and Clint Eastwood derides the ‘pussy generation’ obsessed with being PC.”

The thing is, the scholarships have not been recently created but have existed for many years. The Pinnacle Foundation’s website has specific criteria, including that recipients have “personal or social circumstances which provide significant challenges to the person completing their education” or have “been marginalised due to sexual orientation, gender identity or gender expression”, among other criteria like academic performance and commitment to study.

Meanwhile, The Australian has extended its campaign against the Safe Schools Program to include other organisations that aim to support LGTBI young people, writing last week that the Australian Business and Community Network Scholarship Foundation has introduced scholarships that ask students about their gender identity and sexuality.

We hate to give them ideas, but wait for the big red “exclusive” in The Australian soon — another private organisation doing what it wants with its own money.

Crikey has attempted to contact the Pinnacle Foundation, but has not heard back.

Not the Matildas. The tight regulation of broadcast and branding around the Olympics has already been well documented, but it’s nice to see that one of the more ridiculous restrictions hasn’t seemed to stick. The Australian women’s soccer team, known as the Matildas, has had to ditch its name for the two-week tournament due to a sponsorship clash. The Matildas had to ditch their normal Nike uniforms for official Olympics Adidas uniforms, and go with the catchy new name “Australian National Women’s Football Team”. While the team’s official programming has stuck with the name, every news report seen by Ms Tips has referred to the success of the Matildas. The official Twitter accounts are getting around the long name by using emoji to communicate about the team, who take to the field on Saturday:

Short protest. It can be very hard to be a middle-aged man, who just wants to wear comfortable clothes without judgement. Last week The Wall Street Journal published a story about cargo shorts, with Nicole Hong, who usually writes on legal issues, writing:

“Relationships around the country are being tested by cargo shorts, loosely cut shorts with large pockets sewn onto the sides. Men who love them say they’re comfortable and practical for summer. Detractors say they’ve been out of style for years, deriding them as bulky, uncool and just flat-out ugly. In recent days, the debate has engulfed the nation.”

She interviewed men who find that their wives steal their shorts, never to be seen again and a retailer who said “Bond never wears cargo shorts”.

Since the piece deriding the unfashionable clothing item, members of staff at the Journal decided to demonstrate their solidarity, wearing their shorts in an act of protest: 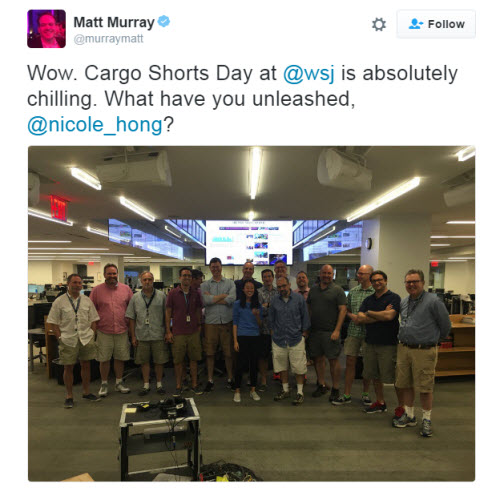 In a later story, Hong wrote that the cargo shorts debate had dominated the website’s traffic for days after publication.

Slavery not so bad, right? While the Republican nominee for president Donald Trump this week joked about the possible assassination of his Democratic opponent Hillary Clinton, it won’t surprise anyone that corners of the Republican Party also hold some interesting views. Jason Lewis from the state of Minnesota, announced this week that he is running for Congress (but is yet to win the Republican nomination for the role). The Star Tribune in Minnesota reports that Lewis seems to think there is nothing wrong with slavery:

Lewis is in a field of six to try and win the Republican nomination to run in November. We doubt he’ll get there.