Who needs journalists when you can just run press releases word-for-word? Not the Herald Sun.

Send a press release to the Herald Sun and your carefully crafted words could well be used — with very little changed — under the Hun‘s own byline.

Yesterday, household task outsourcing company Service Seeking sent the Crikey bunker a press release. We then read it almost word-for-word in the Herald Sun, under a piece allegedly written by scribe Cassie Zervos.

Clean energy consultant Ketan Joshi first spotted the similarities on Twitter. So it’s even clearer, we’ve put the two side-by-side and highlighted the suspiciously similar wording for you below. 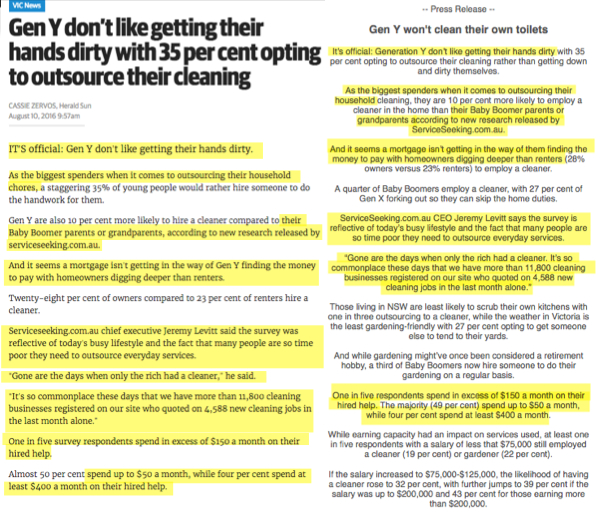 The piece, up by 10am yesterday (four hours after the release was sent out), doesn’t seem to have made today’s paper.

Sometimes we’ve seen this sort of thing happen at country papers and let it pass. But the Herald Sun is hardly a two-bit operation — it’s the country’s highest-circulated daily paper. Fairfax’s Domain went off the same release, but managed to kick it along quite a bit for its article.

The Herald Sun‘s editor was contacted for comment shortly before this piece was published.