‘Extraordinary’ that ABS kept PM out of the loop on #Censusfail: former ACCC chair

The census night stuff-up came on top of a “failure in communication” in the lead up to the day, former ACCC chair Graeme Samuel tells Mandarin journalist David Donaldson.

Revelations that the Australian Bureau of Statistics “did not give appropriate advice” to its minister about the problems on Census night are “extraordinary”, thinks former senior public servant and businessman Graeme Samuel.

There are reports today that by the time Prime Minister Malcolm Turnbull tweeted “We filled in the @ABSCensus tonight online — v easy to do” at 7.17pm, the ABS had been battling attacks on the census website for over nine hours.

Just 28 minutes later the ABS shut down the site, pushing the exercise into further disarray in an effort to avoid a potentially disastrous data leak. Yet it wasn’t until 8.10pm Minister Michael McCormack was finally informed. About 20 minutes later, McCormack told Turnbull what had been occurring.

“It seems to me extraordinary” that the ABS did not notify its minister when it knew something was going wrong earlier in the day, the incredulous former ACCC chair tells The Mandarin.

“Can you imagine the Prime Minister tweeting if he knew what was going on?”

“The role of the public service is to provide advice on policy and issues as they’re arising,” he said. “It doesn’t make sense” that the ABS would seemingly withhold that information from the government.

“To provide advice late seems to be not meeting the expectations on the public service in its responsibilities to government.” 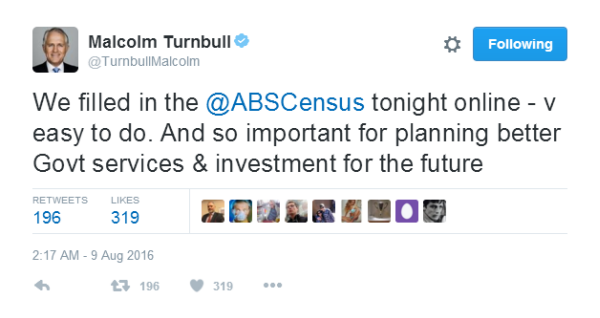 The result is that the minister and Prime Minister have been embarrassed by not being kept in the loop.

“I’ve always had a view that in the public service you owe it to the public and your minister to keep them fully informed about issues that might arise. Especially given the sensitivities around the Census, the minister and Prime Minister should have been notified there was a problem,” he argues.

“You need to keep people fully briefed. The last thing ministers want is surprises — they always say ‘I want bad news in advance’.”

The incident has also exposed the ABS’ lack of readiness for a cyber attack.

An angry Prime Minister conceded this morning that “measures that ought to have been in place to prevent these denial of service attacks interfering with access to the website were not put in place — that is a fact, that was a failure.”

Noting there’s been no verification that it was indeed a denial of service attack, Samuel does not understand how there could have been such a lack of preparation for the possibility. He reckons “it should have been obvious and the subject of proper preparation”.

All this seems to be part of a broader problem. The census night stuff-up came on top of a “failure in communication” in the lead up to the day, Samuel adds.

The statistical agency should have put more effort into explaining that it was not necessary to fill out the form on census night itself, which may have alleviated some of the problems.

But there was also a failure to explain the data retention changes to the public, which led to concerns very late in the process.

“There was a failure in the sense that the public weren’t prepared for the changes being made. There was a sense it crept up on them without being told. If you have nothing to hide you should be out there being as transparent as possible,” he explained.

“If you don’t do that you leave it open to misinformation and scare campaigns. There were changes made in this census. They were made well in advance, so there could have been a debate about them. What arose in the latter stages, the privacy concerns, could have been minimised and neutralised if they had done better at communicating with the public.”

*This article was originally published at Crikey sister site The Mandarin

The head of the ABS is a smug LNP public servant. He probably wasn’t told either.

While I agree in principle with the PS keeping the Minister informed it is also true that there has been an almost total breakdown in relationships between public servants and the government, not only nationally but in all states with a conservative government. So it is both little wonder and understandable that they would not bother to tell the Minister what is happening, after all those same Ministers develop policies deliberately excluding the PS, because unbiased critical assessment is not wanted in modern day Tory land.

I am inclined to agree Paul. My daughter works in the Commonwealth PS in a cultural institution, they are the worst paid BTW. There has been a 2.5 % efficiency dividend (read funding cut) each of the eight years she has worked there, there have also been staff freezes for about a third of that time. They are now in their busiest ever years, but with staff acting in other roles, staff not replaced etc, client services are delayed and morale is poor. Why would they want to help the government when all the government does is deride them. No wonder really.

The roosts are coming home to chickens and it could not be more deserved. Years of denigration, underfunding/staffing and being given the shitty end of any sticks handy. Who is surprised ?

This should be good preparation for electoral voting online. A well placed ddos attack could actually give us the government that some of us want.