Australia's cutest-sounding political forum to get an upgrade courtesy of Channel Ten. And other media tidbits of the day.

Journos demand Leak apology. More than 150 people who work in the media (the list keeps growing) have signed an open letter calling on The Australian to apologise over a recent Bill Leak cartoon that suggested Aboriginal fathers do not care about their children.

The petition has been co-ordinated through Croakey, includes reporters from Croakey, The Guardian, New Matilda, Fairfax and the ABC, many of them indigenous journalists or experts in indigenous affairs. Crikey didn’t recognise any names from News Corp on the petition, and saw only one cartoonist — Fiona Katauskas.

Bill Leak’s cartoon and position have been supported to the highest levels of News Corp’s editorial division. Head of corporate affairs and strategic planning Campbell Reid on Friday sent an email to staff saying Leak’s cartoon was the best thing he’d seen all week. — Myriam Robin

Yabsley wins Ten defo suit. Former Liberal politician Michael Yabsley says he intends to upgrade his Wombat Hollow property out of the “substantial” proceeds of his successful case against Network Ten over a story that alleged he had been running “illegal events” (possibly Liberal Party fundraisers) at the property.

The claims were first aired in free monthly magazine Latte Life and were then the subject of a story on Channel Ten by Walkley winner Adam Walters (he’s since left the network).

In a statement, Yabsley said the damages and “imminent” payment of costs “brings closure to the defamatory and untruthful material broadcast by Network Ten in relation to The Wombat Hollow Forum”:

“I hope the Channel Ten Newsroom has learnt a lesson that it is simply unacceptable to broadcast material that could only be described as fast and loose.

“The inescapable fact is that the material broadcast by Channel Ten about the Wombat Hollow Forum was full of lies, provided by the spasmodic, give away, tabloid publication Latte Life.

Yabsley and his wife have owned Wombat Hollow since 1997 and have lived there since 2013. From the property, Yabsley makes and sells handcrafted lamps and cast-iron beds. It’s mostly an events business (weddings and other functions) run by Susie Yabsley, but since 2014 the Wombat Hollow Forum has run events featuring a range of high-powered speakers. Recent guests to the forum include Prime Minister Malcolm Turnbull and Liberals Brendan Nelson and Nick Greiner. The NSW Greens claimed it did not have an appropriate liquor licence to run events last year — the Yabsleys reject claims they breached licensing laws on the serving of alcohol.

“One can only conclude that sections of the media and perhaps other interests are trying to harm what we are doing at Wombat Hollow,” Michael and Susie Yabsley said in an earlier September statement. Channel Ten was contacted for comment. — Myriam Robin

CFMEU stands up for China. The NSW division of the CFMEU last night joined a vigil outside Channel Seven’s Martin Place studios to protest against the network’s coverage of the Olympics, which the CFMEU’s Chinese-Australian members say has been discriminatory.

Protesters say the entry of the 416-person Chinese team during the opening ceremony was obscured by Seven cutting to a commercial break. Later, when a prediction of the medal tallies was on screen, the Chinese flag was erroneously displayed as Chile’s (which, by the by, looks entirely different — but in Seven’s defence, the IOC used a different wrong flag for China during the opening ceremony and had to apologise). 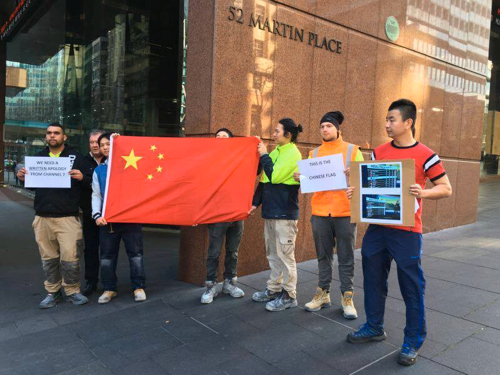 “Channel Seven should realise there are ethnic communities in Australia that will not only be cheering on their adopted homeland, but also their place of birth. The Chinese community in Australia is the largest non-indigenous minority group – it’s not too much to ask that Channel Seven get the Chinese flag right.”

“Many members of the Sydney Chinese community are angry at the lack of awareness Channel Seven has shown toward ethnic viewers of the Olympics.

“We want Channel Seven management to apologise for its broadcast to date and to ensure it shows respect to ethnic communities in Australia by ensuring they can watch the performances of athletes from their homelands.”

It’s a bit of an odd fit for the CFMEU. We contacted them to ask why this issue drew their attention, but have yet to hear back. Channel Seven was also contacted for comment. — Myriam Robin

Beware wrath of the IOC. If you’re not an official broadcaster, it can be tricky covering the Olympics, as Fairfax’s scribes were reminded yesterday.

An all-staff email reminded everyone that they weren’t allowed to embed or retweet any Channel Seven posts with video in them during the Olympics.

“The reason for this is Fairfax can only post a certain amount of Channel 7 video a day. Any embedded posts count against this total amount of content. This also means we cannot embed Channel 7 YouTube videos.

Crikey’s heard of similar briefings going on in other newsrooms. As we noted in our pieces on the Olympic broadcast restrictions a while back, even videos within the daily allowance have to expire in 24 hours, which means for many outlets, the work just isn’t worth the payoff (we’ve got a fairly comprehensive list of all the broadcast restrictions here).

SBS isn’t one of the official Olympic outlets, so SBS2’s The Feed has asked its viewers how they would like to see it recreate Olympic footage using other means. Cats videos, claymation and requests for the team to reenact events using interpretive dance were some of the suggestions.

In New Zealand, where the fight for access has been rather more acrimonious this time, a battle is due to commence in the High Court this afternoon after Fairfax NZ and NZME used video from the Rio Olympics Sky NZ has the rights to — Sky NZ is seeking a court injunction. — Myriam Robin

Slow-motion train wreck. The Roger Ailes story gets murkier by the day. US magazine Vanity Fair has claimed that there are audio tapes recorded by a number of women who were “in conversations” with Ailes. Vanity Fair claims the existence of these tapes was hastening the settlement of the sexual harassment suit brought against Ailes by Gretchen Carlson, a former Fox News host.

Ailes has denied all the allegations, but Vanity Fair claims the existence of these tapes is why his lawyers are trying to force the negotiations with Carlson’s lawyers into private arbitration so that the contents of the tapes are not played in open court. Vanity Fair also claimed the settlement with Carlson could be in the “eight figures”. The magazine didn’t say what was on the tapes, but many speculate the contents are not helpful to Ailes’ defence.

And there are more reports of spying by Ailes’ so-called “black ops” group at Fox News with one CNN reporter claiming that a Fox News staffer he was dating a few years ago was, in fact, spying on him and reporting back to Ailes. Brian Stelter is a leading critic of Ailes and Fox News. Stelter told a US media outlet, New Day:

“About 10 years ago I had a crush on a woman at Fox News. She was a low level staffer. I was in college at the time. So I was going out on what I thought were dates. Chris, I thought these were dates. These were not dates. She was actually reporting back to Fox News about me. She was reporting back about what I thought of her and about CNN and MSNBC and Fox. Because I was a reporter on the beat, they were actually spying on me that way.”

Andrew Butcher, the former News Corp PR (and now Australian political lobbyist) has an interesting word in the story:

“Roger ruled with a heavy dose of implied threats—to journalists, staff, and even colleagues who didn’t work for him—and psychological games,” former News Corp. P.R. executive Andrew Butcher told me (the Vanity Fair article author, Sarah Ellison) . “Roger deserves to end his career in disgrace,” Butcher continued. “It seems that Rupert’s tolerance of his excesses has finally been rejected as Lachlan and James modernize Fox and bring it in line with what is acceptable in a 21st-century workplace.”

Front page of the day. The Guardian doesn’t have an Australian print edition, but its UK parent has splashed with its allegations of brutality inside Australia’s detention centres, this time gleaned from the words of detention centre staff themselves … 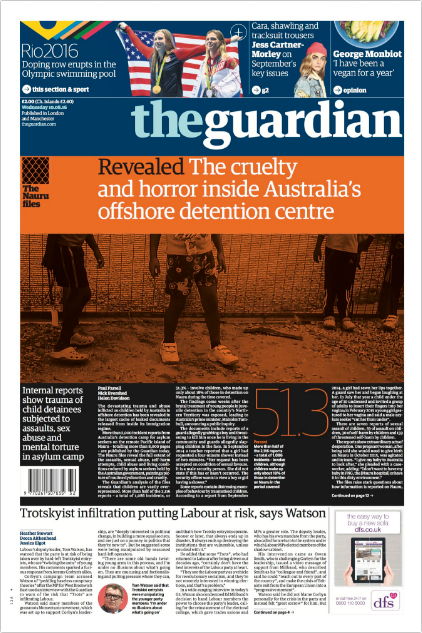 I dare say that TV coverage in China is full of Chinese Olympic content. Probably the only Australian to feature there is Mack Horton.

Frankly, China can get stuffed and the CFMEU should know better than to support a nation which is taking their jobs. Like many Australians, I have second and third choice countries, in my case Canada and Slovakia. The seven coverage has been essentially crap. No background nothing about anyone expect Australian athletes. Didn’t even show the Archery teams shoot off. No stories about the athletes from varios countries or the country itself. I long for Ken Sutcliffe and co who used to make the Olympics such an adventure on 9. However, China is big enough and has enough tame media in Australia to look after itself.

The stance of the CFMEU is beyond credulity.