John Oliver on the importance of local journalists. And other media tidbits of the day.

The end is nigh. In May, Fairfax chief executive Greg Hywood signalled the company would in the future be axing its Monday-to-Friday editions of the Sydney Morning Herald and The Age. “It should surprise no one, and certainly not us, that the seven-day-a-week publishing model will eventually give way to weekend-only or more targeted printing for most publishers,” he said. While Hywood said an announcement on this was “some time away”, it was “inevitable”.

Within Fairfax, the suspense is building. One theory is that a date for closing the Monday-to-Friday editions will be announced tomorrow. Fairfax has its full-year profit results briefing at 10.30am. — Myriam Robin

Ailes probed. When the Murdoch clan forced Roger Ailes to leave Fox News and 21st Century Fox (but remain as a consultant until 2018), they no doubt thought they were being their usual clever selves by greasing his exit with a US$40 million payment. But now, New York magazine is reporting that 21st Century Fox executives and auditors are finding that Ailes spent millions of dollars of the company’s money paying off women who had complained about sexual harassment, monitoring and harassing critics of Ailes, and running a so-called black ops against them. New York magazine, quoting what it said were three separate sources, said this was done without the knowledge of anyone at 21st Century Fox.

And investigations have started into another New York magazine report from late last week on how Ailes was able to use Fox News money to buy the silence of a woman who complained about him, without the deal coming to the attention of 21st Century Fox management and board, seeing the package was worth more than US$3.1 million. The woman concerned, Laurie Luhn, was a guest booker for Fox News. She claimed Ailes had sexually harassed her for 20 years. She was paid a severance package in 2011, before the Murdoch empire was split into News Corp and 21st Century Fox.

“‘A settlement of that size that involved a complaint against Roger Ailes would hopefully have come to the attention of senior officials of 21st Century Fox,’ says Charles Elson, director of Center for Corporate Governance, University of Delaware. ‘That it didn’t from a controls standpoint raises concerns.’ John Coffee, director of the Center on Corporate Governance at Columbia University Law School, says Fox’s auditors should have known about the payment. ‘This should have gone up to the audit committee very quickly. It should have been looked at.'”

If this story is true, Fox faces possible investigation by US corporate regulator, the Securities and Exchange Commission as to why the settlement wasn’t included in the accounts and who enabled it to be omitted and why. The claimed cover-up should be of considerable interest to the Murdochs, especially co-chair Lachlan Murdoch who is in Australia for the News Corp faux in-house Walkley Awards to company journalists. — Glenn Dyer

The numbers are in. News Corp Australia saved $40 million in operating costs over the past financial year, as well as a 5% reduction in core costs in the June half year, the company revealed at its full-year results briefing this morning. CEO Robert Thomson said News Corp Australia was looking at further cost reductions through “shared services”, but did not elaborate. The company closed seven Leader newspapers in Melbourne this year, and embarked on a redundancy round in the latter part of last year that had 55 staff shown the door.

Thomson said the company would be looking for cost and other savings if allowed to buy the APN regional dailies and other papers. He said that would improve the company’s coverage of Northern Australia (Queensland) and was looking especially for synergies with REA Group in real estate in the new areas. CFO Bedi Singh said “higher prices and digital subscriptions”offset “print falls” in Australia in the year and quarter. Both Singh and Thomson said the company is looking at getting the rest of the 5% core savings in the next few months, meaning tens of millions of dollars more in cost cuts by early 2017. Once again News did not say if the various geographic parts of the newspaper business operated at a loss or a profit in the final quarter or full year.

The cost reductions come as advertising in the group continues to fall. Revenues at News Corp Australia fell 9% in local currency, and while digital ad revenues rose modestly, they were not enough to offset the loss of print revenues. One bright spot for the journalism businesses was the growth in digital subscriber numbers. In Australia, total digital subs across all newspapers rose 20.8% to 272,700.

The company said print volumes fell globally and circulation revenues were higher because of a combination of more paywall and other digital subscribers, plus price rises for the paywalls and for the newspapers.

Both Thomson and Singh emphasised that the company’s future was in being diversified and digital.

Foxtel pooh-poohs revenue. Guess what: Foxtel, 50% owned by News Corp and managed by its appointees (Telstra has the other half, it reports its results on Thursday), is now being managed for subscription growth, according to News CEO Robert Thomson, with a solid dose of cost control. Revenue is being sacrificed to keep subscriber numbers rising for both the regular Foxtel offering and the Presto streaming-video joint venture with Seven.

Speaking during a post-results briefing, Thomson said Foxtel had a 5% rise in cable and satellite subscribers in the year to June 30, but the churn (the loss of subscribers that have to be replaced) soared to more than 14% in the year from just under 10% as people who had signed up on a no contract basis, failed to renew. Both Thomson and News CFO Bedi Singh made it clear that Foxtel was being managed to “drive subscriber numbers” and control costs.

News said Foxtel had “more than 2.9 million” subscribers, but again there was no breakdown between cable and satellite subscribers and those subscribing to the Presto streaming video joint venture owned with Seven West Media. News said the average revenue per user (a key metric for subscription TV) fell 3% to US$89 in the year. That underlines how the pay TV operator is being run for subscriber numbers and not earnings and revenue growth. — Glenn Dyer

Video of the day. John Oliver says he’s not a journalist — but relies on the work of those who are. “The media is a food chain that would fall apart without local papers.” 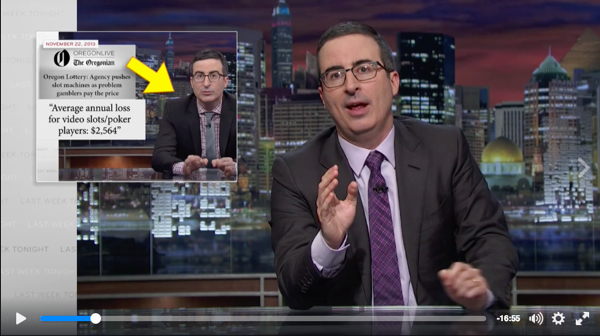 The decline of journalism? The longest suicide note in history.