Few voters see employment benefits from trade, and many are suspicious of globalisation, this week's Essential report shows.

Voters have mixed feelings about globalisation and believe trade destroys, rather than creates, jobs, this week’s Essential Report suggests — while Malcolm Turnbull has arrested his most recent slide into unpopularity.

Asked about whether Australia had gained or lost from globalisation, voters were evenly divided, with 29% saying gained and 29% lost, while 24% were undecided. However, the split according to voting intention is more interesting. Greens voters are the most positively disposed toward globalisation, perhaps confirming the inner-urban, educated elite stereotype, while Coalition voters also view globalisation positively. But Labor voters and particularly “other” (including NXT) voters view it negatively — indeed, “other” voters are almost the exact reverse of Greens voters in their attitude to globalisation.

There’s a similar split on trade, but overall voters are much more hostile in their view of the impact on jobs of trade: 40% of voters say trade causes Australia to lose jobs, while 28% say we gain jobs from trade. Coalition voters are slightly positive about the impact, with 36% saying trade creates jobs and 32% saying it reduces them, as are Greens voters, 32%-28%, but Labor voters are very negative — 47% say it destroys jobs and just 28% say it creates them. “Other” voters are the most hostile of all: 58% say trade destroys jobs and just 12% say it creates them.

The results tend to confirm some stereotypes: “other” voters, likely to vote for NXT or even One Nation, view globalisation and free trade very negatively; Labor voters, while less hostile, still see them as negatives. Coalition voters, however, are on balance positively disposed toward them. The positive views of Greens voters are interesting — the Greens parliamentary party is strongly protectionist and supportive of government intervention to protect manufacturing, which appears to be at odds with the pro-open market sympathies of its party base. That 40% of voters think trade destroys jobs also suggests major party politicians, who are notionally supportive of free trade, continue to do a poor job of explaining the economic (including employment) benefits of trade to voters.

Meantime, Malcolm Turnbull has halted what has been a long slide in his approval ratings with voters: 38% of voters approve of his performance, while 43% say they disapprove. That’s his second-worst ever performance as prime minister but still better than his July performance (37%-48%). Bill Shorten has marked time: 37% approve of his performance (down two points) and 41% disapprove (steady). Turnbull leads Shorten as preferred prime minister by 10 points, 40%-30%, up from Turnbull’s 39%-31% lead in July.

However, privacy advocates hoping concerns about the census have taken hold in the community will be somewhat disappointed: 45% of voters approve of the ABS keeping names and addresses while 39% do not approve. Liberal voters are the most eager to trash their privacy, with 57% supporting ABS retention of names while 28% disapprove. However, Labor, Greens and “other” voters all on balance disapprove — with “other” voters being the most paranoid of all. 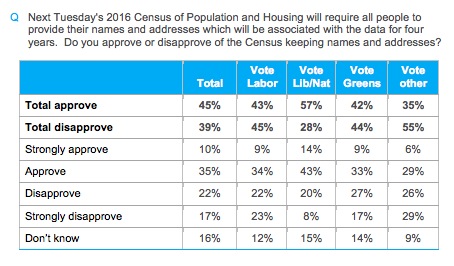 On voting intention, the Coalition has gained a point on its primary vote from last week (40%) while Labor remains on 37%, the Greens on 10% and NXT on 4%, for an unchanged two-party preferred outcome of 52%-48% in Labor’s favour.

“Voters have mixed feelings about globalisation and believe trade destroys, rather than creates, jobs”
It is just possible that the population is learning from decades of experience.

Bernard…where is the evidence that there is ANY benefit to Oz workers from free trade? It can’t be ‘explained’, because it is just spin.
Foreign owners of Australian business either take their jobs off-shore, or import their own workers under 457 visa arrangements. Either way, Oz workers don’t get a look in.
When are you going to get the connection between the rise of NXT and One Nation, and the lack of jobs caused by so-called free trade agreements???

BK is a wonderful example of the King James VI/I syndrome – “wisest fool in Christendom” – all information available does not penetrate prejudice.
We all know his views of Public Health, Protectionism, Free Trade – what is odd is that he writes such rants in Crikey instead of his spiritual home, the mudorc empire.