Chris Mitchell really hates Twitter. And other media tidbits of the day.

Ratings doesn’t mean gold. It’s been a golden start to the Rio Olympics for Australia and the Seven Network with high ratings for the first two days of competition. But there’s doubt whether it means gold for the balance sheet of broadcaster Seven West Media. The cost of the Games and the new AFL broadcast contract in 2017 are directly responsible for the company’s warning last week of a 15% to 20% slide in group profit for the year to June 2017.

Seven shares lost 21% in value last week as a result, closing the week on 81 cents, the lowest since February. That was a $250 million loss in market value for the network, or about what Seven says it will earn on an earnings before interest and tax basis in 2016-17.

As surprising as that was to investors, the annual report issued with last week’s 2016-17 profit report and that shock downgrade for 2016-17 illustrates the increasing financial pressure on Kerry Stokes’ media company over past five years and the damage that has done to earnings. Buried in the report is a table that raises questions about the long-term future of the company and broadcast and print media in this country.

The table, on Page 74, gives a five-year profit history for the company (for the purposes of explaining the way executives’ incentives are organised). But it also illustrates the way the company’s earnings before interest and tax (EBIT ) have slowly been eroded by rising costs and weakening ad revenues. — Glenn Dyer

Chris Mitchell v Twitter. Who better to write a media column than the country’s most experienced editor? We had high hopes for Chris Mitchell’s weekly slot in The Australian‘s media pages, but a few short months in, has he already run out of ideas?

“Contrast this on-the-ground journalism with the Tuesday morning sneering of non-journalist and Crikey political editor ­Bernard Keane who on Twitter impugned the country’s best journalist, asking if that ‘grub Paul Kelly’ would oppose this royal commission as he had the national commission into child sexual abuse set up by Julia Gillard.

“That is what passes for political comment on Twitter, which then drives much of the degraded online news media.”

“Twitter is the worst. I would call it little more than a left-wing echo chamber for various highly politicised activists, including many journalists. This is not surprising since it was actually invented as a way for pop stars to talk to their fans rather than to discuss serious issues.

“It can be a danger for reporters when not used sensibly. Smart ­editors want reporters with large Twitter followings to use social media to market their stories, but they risk their own product’s credibility when they allow a journalist to embark on ideological battles on social media.

“Who, for example, could follow Channel Ten’s Paul Bongiorno or Crikey’s Bernard Keane on ­Twitter and ever imagine they were impartial reporters? If you have never done so, Google their names with the word Twitter, call up their feeds and check for yourself.”

You’ve got mail. Get into a disagreement with ubiquitous celebrity reporter Peter Ford on Twitter, and he may well send you a postcard.

In recent days, radio host Meshel Laurie and lawyer Lydia Shelly have both shared the cards Ford sent them after they blocked him on Twitter, in both instances over disagreements about the best way to deal with anti-Islam comments such as those made by Channel Nine host Sonia Kruger.

Laurie and Shelly were less than pleased with the approach, with Shelly querying why he tracked her down at her work and Laurie calling it “sad”. 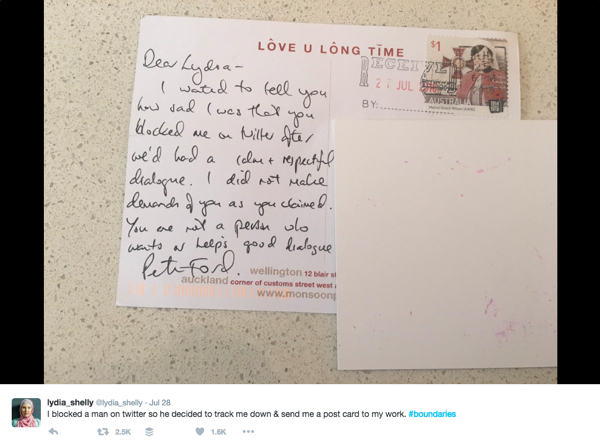 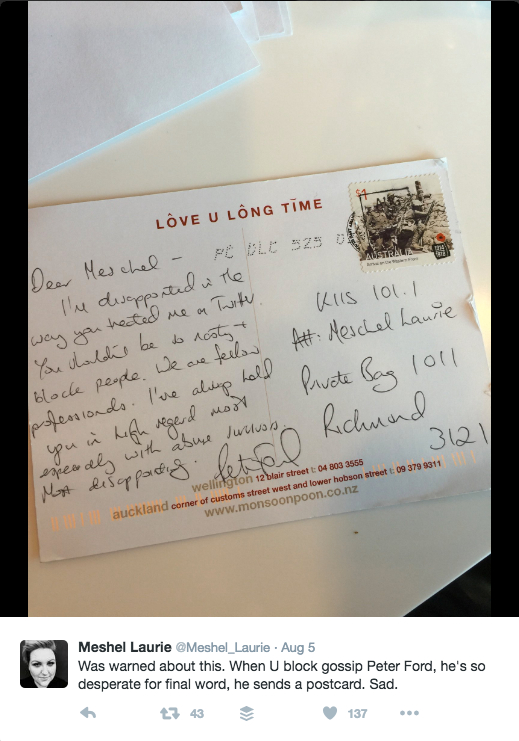 We asked Ford what was up with the postcards. He said he was somewhat perplexed by the negative reaction. The postcards were sent to publicly available work addresses, so he’s not sure what boundaries he’s stepped over. We asked him if he always sent postcards to those who blocked him on social media, and he said he sent out a lot of postcards for all sorts of reasons.

“There’s very few people in the showbiz world who haven’t had a card or note from me at some time. It’s just what I do,” he said. “It’s a bit old-school, but sooner or later you run into people, and I don’t like there to be hard feelings.”

To be fair, in the case of the postcard to Shelly, Ford’s card repeated the criticism about her that led her to block him in the first place. The postcard to Laurie is more conciliatory.

Ford said it’s not the first time he’s posted something to Laurie — he was in touch to congratulate her on her work raising money for sex abuse victims to confront George Pell in the Vatican. “If Meshel wants to call me sad and desperate, that’s fine.”

“Amazing that in 2016 someone writing to someone at a business address in a polite and professional way is considered newsworthy.” — Myriam Robin 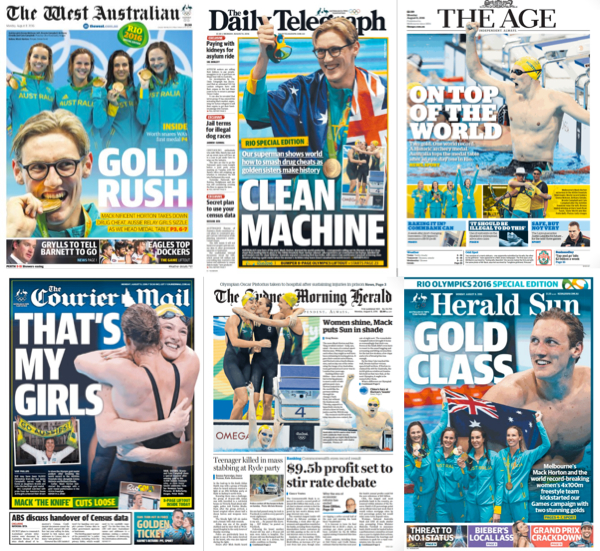 Rio? I’m waiting to see who bags the propaganda gold.

Limited News hates sharing?
Remember when they ran the toll-house on the news hi-way?

Of course on Twitter you can’t edit feed-back – everyone gets to see it?