The University of Technology in Sydney's Communications students must all do a project in which they aim to make a product for Vice.

Universities have always paired final-year students with commercial organisations, formally or informally, to help them out when it comes to the job markets. But eyebrows have been raised at the decision by the University of Technology, Sydney to train all its final-year communications students on how to pitch for a company like Vice Media.

According to course documentation seen by Crikey, the students in the Communication Capstone Project (all those graduating from a wide range of media and comms courses) are required to create a “communication project” that works for one of Vice Media’s channels. Given the wide range of students in the course, it could be a piece of reporting, a creative writing piece, a publicity campaign or a short film. The best pieces could be used by Vice, whose team gives a guest lecture to students at the beginning of the course and has recommended readings so students have a better feel for what it’s after.

According to the first week’s lecture, Vice was chosen because its content is targeted towards “millennial audiences” and because it could mentor and pay the best students for the use of their work. Crikey understands it’s at least the second time the assessment has been used, and it’s been controversial in previous years with some students, who don’t appreciate Vice‘s highly commercial, gonzo style. The lecturer seems to have anticipated some of the criticisms — the course slides include a detailed list of what students shouldn’t fear from the partnership … 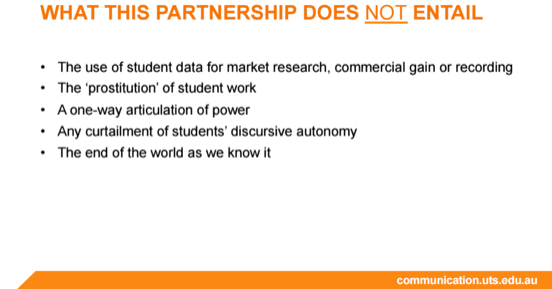 Ms Tips has another query: is Vice really the best place to be training students to work in? Its Australian team is tiny and mostly commercial (it has around half-a-dozen people in full-time editorial roles in Australia). While legacy outlets may not be as cutting edge, they are in a position to employ a lot more UTS graduates …