But how much will it hurt The Australian?

After the Australian‘s cartoonist Bill Leak drew a cartoon on a perceived lack of parental responsibility towards children in Aboriginal communities, he received widespread censure. As you would expect, today’s Oz contains a vigorous defence, both from editor-in-chief Paul “Boris” Whittaker and Leak himself, who refers to social media outrage as having been perpetuated by “tweety birds” who, like children, “can’t understand things” and so “lash out and throw tantrums”.

But while the Oz seems pretty happy with the attention, its advertisers are not. In the paper yesterday was an ad from Suncorp Bank. It started getting social media heat from early afternoon — and quickly distanced itself from the paper. According to a tweet this morning, it is “working with its media placement agencies to remove our advertising from this content.” 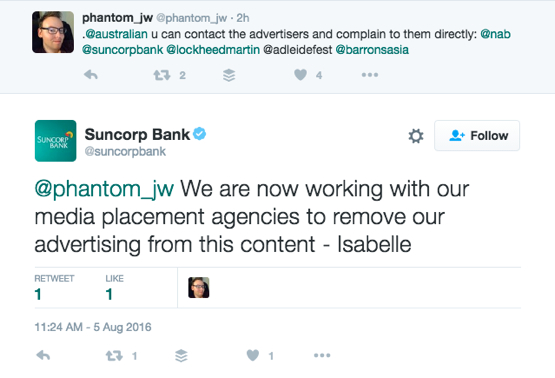 Meanwhile, the Adelaide Festival, another advertiser yesterday, says it doesn’t endorse Leak’s sentiments and booked its ad well in advance, but stops short of threatening future advertising with the Oz … 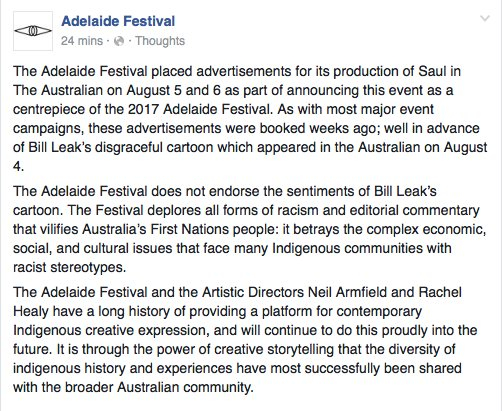 Of course, advertisers threaten to pull their ads all the time from media outlets, often for negative coverage of their own affairs. So we’re not sure the Oz will be quickly cowed by a bit of lost revenue. And there is another commercial consideration to publishing Leak: his takes have a history of offending, which does draw a certain supporter base who subscribes to the Oz because of that.

This morning, New Matilda went through the paper and singled out all the advertisers in yesterday’s edition of the Oz. None of the others mentioned in the piece have so far publicly responded. This morning, Indigenous Affairs Minister Nigel Scullion said: “Although Australian cartoonists have a rich tradition of irreverent satire, there is absolutely no place for depicting racist stereotypes.”

Scullion has been told to pop his head up.

Something a little different but nevertheless worrying – and unnecessary. Related to ‘freedom of speech’ and the right of the public to be properly informed.

https://www.theguardian.com/media/2016/aug/05/abc-source-dries-up-as-transcripts-of-news-and-current-affairs-shows-curtailed?CMP=share_btn_fb
“Some broadcasters at the ABC are not happy with a decision by management to dramatically wind back transcriptions of news and current affairs programs…..”

Paul Whittaker once called me a busybody because I sent him actual refugee law, he is a vicious, racist clown who is not fit to manage a dunny block.