Bad timing. The Country Liberal Party in the Northern Territory was going to struggle to hold onto government at the NT’s upcoming election on August 27, even before the Don Dale juvenile detention centre scandal erupted last week. Now the party, led by Adam Giles, looks like it will lose government in a landslide. It makes posting this video yesterday of a former detainee at Don Dale a questionable move. The video follows Kenny, who was detained in Don Dale at age 11, although we don’t find out why. When he left the juvenile detention centre he worked to get a job with crocodiles and was helped by his local MP Giovanna Webb. This is probably not the best time to be spruiking how the CLP helps kids who end up there. 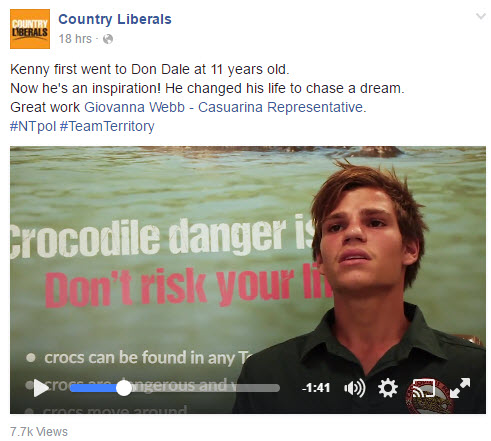 Racing controversy. The Melbourne Racing Club held a special general meeting on the weekend, passing rules allowing the terms of the chairman, vice-chairman and treasurer to be extended from a six-year maximum to 12 years, with the rule passing by just 44 votes of about 2500 members. A tipster tells us the move was very controversial.

According to the Herald Sun, the meeting was the second time the motion had been voted on, as members felt that they hadn’t been given enough notice at a previous meeting in April. Our tipster tells us that the highlight of the meeting was when “an irate member questioned why CEO Brodie Arnhold was even at the meeting and currently employed given he had ‘besmirched the reputation of our club'”. The alleged besmirchment refers to reports that Arnhold shouted “we’ll fix that” at a dinner hosted by suspended horse trainer Peter Moody at a dinner last month, where Moody made comments about not working under current Chief Steward of racing Terry Bailey and Head of Integrity Dayle Brown. Armhold denied the allegation to The Age.

Our tipster says: “Stand by for some turbulence at Caulfield.”

Chief Mousers get their claws out. In more very important international feline news, Britain’s most powerful cat, Larry, Chief Mouser at 10 Downing Street, has penned (clawed maybe?) a piece for The Guardian defending himself after days of reports about his run-ins with Boris Johnson’s cat Palmerston, who lives nearby at Whitehall. Larry, who belongs to the address, not the Prime Minister, has been involved in multiple fights with Palmerston, although the most recent one has been reported as particularly vicious, with Palmerston’s ear now in “terrible shape” .

Larry’s piece in The Guardian is well worth a read, but he seems suspicious of Jeremy Corbyn:

“Their claws may be sharp but I’m a west London pugilist who has never walked away from a fight, and I’m not going to start now. Besides, we’re living in turbulent times, and fortunes can change overnight.

“No, my real worry is what happens if May calls an early election and Jezza wins. I hear he has a feline called El Gato and I really don’t fancy sharing this gaff. I didn’t vote to leave the EU only to end up with a Spanish housemate.”

The Treasury office has also employed a mouser, Gladstone, who will soon be able to roam the streets as well. We suggest our British cousins they take a look at the Victorian government’s Responsible Cat Ownership course and certificate, which was released on Monday, to avoid further confrontation.

New number who dis. Most of us would be thrilled to get a text from Australian rock legend Jimmy Barnes, but not this person, who is definitely not fellow rocker Bernard Fanning. Barnes tweeted this morning that he attempted to wish the former Powderfinger frontman good luck, but was told very impolitely that he had the wrong number: 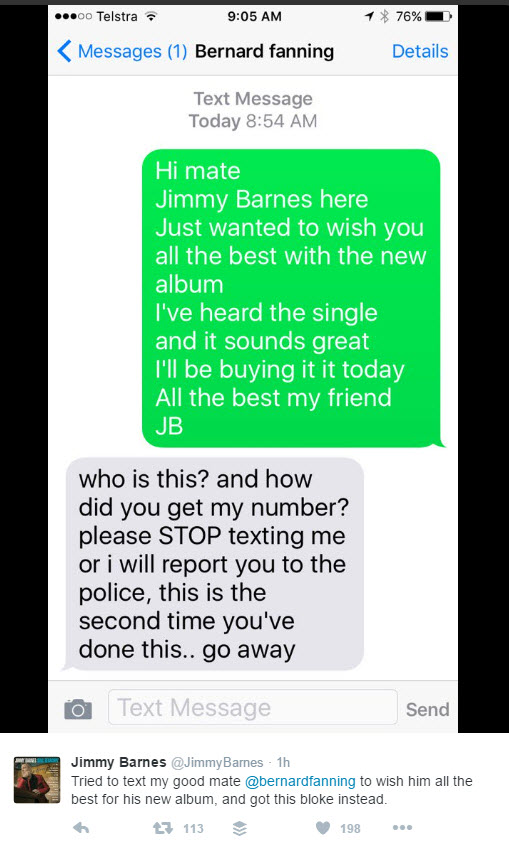 Kids say the darndest things. Former Australian prime minister Julia Gillard warned US presidential candidate Hillary Rodham Clinton about the way in which her opponents would speak about her, referring to the time then-opposition leader Tony Abbott stood in front of a sign reading “Bob Brown’s bitch,” but we don’t think she could have predicted this. American political reporters have tweeted that a school-age child at a Donald Trump rally started yelling “take that bitch down” when Trump mentioned Clinton.

While little is known about the child, the Los Angeles Times is reporting that his mother defended his right to free speech:

“His mother later defended the child’s right to speak and blamed his language on ‘Democratic schools.’

The child, who looked no more than 10, was sitting next to his mother in the media section.

The mother identified herself in a brief interview with a small group of reporters as Pam Kohler of Mount Vernon, Va., but she would not name her son or say how old he is.

‘He’s a minor so he can’t be interviewed,’ Kohler said.

‘I think he has a right to speak what he wants to,’ she said.

Asked where he learned to speak that way, she answered, ‘Democratic schools.'”

The NT electoral system is a joke, but can Hare-Clark fix it?

The Northern Territory is a failed experiment

Perhaps Ms Kohler should send her little brat to a Republican school to save him from the democratics?