The national broadcasters remain far ahead of commercial media as the most trusted source of reporting during the federal election campaign, while News Corp newspapers and commercial radio were the least-trusted, today’s Essential Report shows. 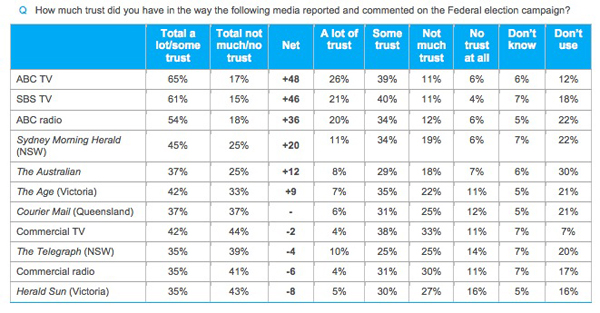 News Corp newspapers, which campaigned hard against Labor amid rumours its editors would receive a bonus if the Turnbull government was returned, had noticeably lower levels of trust. The Australian scored just 37% trust, although it had the highest “do not use” response from voters (30%) reflecting that it is a national, not state-based, newspaper. That was the same score as The Courier-Mail, while the two most hysterically pro-Coalition newspapers, the Daily Telegraph in Sydney and the Herald-Sun in Melbourne, both scored 35% trust; 43% said they had little or no trust in the Melbourne tabloid, and 39% said they had little or no trust in the Telegraph. The only outlet to rival the News Corp tabloids for lack of trust was commercial radio, which also scored 35% trust.

Trust in the media as a whole tends to go down during the fevered atmosphere of election campaigns. All outlets scored worse than they did in the last such poll done by Essential in February. But compared to the highly partisan 2013 election, all media outlets fared relatively better this time round. In 2013, ABC TV was most trusted, with 58%, the Fairfax papers were on 39% and 42%, and the highly partisan News Corp tabloids scored in the low-mid 20s. The Daily Telegraph vastly improved its performance this election, with 35% of NSW respondents having “some” or “a lot” of trust in its coverage, compared to 25% last time. The SMH also improved its score this election, though not by as much. The results also illustrate something we first pointed out in February: the gap between News Corp and Fairfax’s papers is narrowing, as both the Age and SMH see sharp falls in total trust, while the News Corp tabloids make gains.