Desperate times … Fairfax Media has taken another step towards a radical revamping of its metro and regional newspapers by slashing their value by $894.7 million, a precursor towards closing the Monday-to-Friday editions of The Age and The Sydney Morning Herald, and the weekend edition of The Australian Financial Review. This morning’s decision follows comments made in early […]

Desperate times … Fairfax Media has taken another step towards a radical revamping of its metro and regional newspapers by slashing their value by $894.7 million, a precursor towards closing the Monday-to-Friday editions of The Age and The Sydney Morning Herald, and the weekend edition of The Australian Financial Review.

This morning’s decision follows comments made in early May, which first revealed that the company was thinking seriously about about reducing its print runs to its most profitable days. CEO Greg Hywood pointed out that the cost of doing this was now around $150 million. The Fin generates most of its revenue on weekdays, while at the SMH and Age, 65% of revenues are generated on the weekends.

In an announcement to the ASX this morning, Fairfax revealed the impairments as part of a move to separate the Domain online property business from the rest of the company. The separation will please big shareholders and many analysts who have been pressing Fairfax to take this step.

The impairments mean that Fairfax no longer believes the print assets in Australia and NZ will generate enough revenue, cash-flow and earnings in the coming year to justify their current book values. News Corp has been forced to make similar impairments to its Australian newspaper assets in recent years for the same reason. In the case of Fairfax, it’s also linked to the separation of Domain into a standalone business.

Hywood appeared to brush down expectations of a sale of Domain. “Domain makes a significant earnings contribution and remains an integral and growing part of Fairfax. We have no plans for that to change,” he said in the statement.

From those comments and the figures contained in attachments to the announcement, it is clear Fairfax board and management see the future of the company as an online property play, with assets in other media, such as the Stan streaming video joint venture with Nine Entertainment, the news websites and other digital ventures, and then the metro and community/regional papers. The market is expected to boost the Fairfax share price once it sees the broken-out balance sheet value for Domain separated from the millstones that are the print assets. — Glenn Dyer

Rothfield is quoted in the SMH’s story, written by Nick McKenzie and Kate McClymont, saying he and Hayson were friends. “Mates punt together and get tickets for each other,” he told the SMH.

You’d think that given the allegations, Rothfield might try to distance himself from Hayson publicly for a while. But he appears to have taken the opposite approach in the Sunday Tele, for which he filed an exclusive interview with the NRL’s Kieran Foran.

Foran was driven to the interview by none other than Hayson, a decade-long friend, Rothfield’s profile notes. The piece also quotes Foran saying of Hayson:

“I can’t speak more highly of the bloke. I know that there is a lot of stuff out there about him. I don’t think a bloke should be judged on what he has done in the past, just because he has owned a brothel. I don’t think that has anything to do with it. The guy is a family man. He has two young kids. He is a good man and a good father.”

No relationship between Rothfield and Hayson, meanwhile, is alluded to or disclosed in the interview write-up.

Aside from his comments to Fairfax, Rothfield hasn’t made any further public comment on the allegations.

Hayson sent McClymont abusive text messages on Friday morning, which she has revealed on her Twitter account. 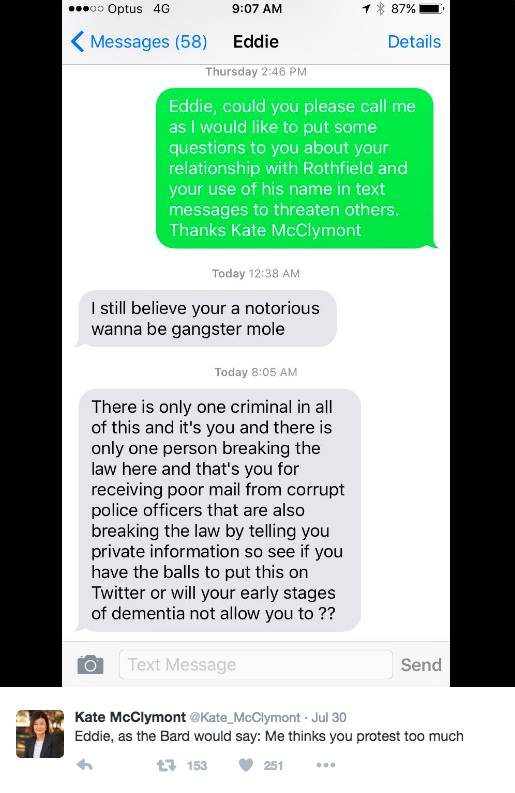 Watching us watching them. Australia made global headlines last week for its treatment of juvenile inmates in its prison system.

But it’s not always the high-profile stories that make a splash around the world. Two other incidents were passed onto Crikey over the weekend.

In the Chinese-language edition of People’s Daily, an article in The Australian by senior business reporter Glenda Korporaal urging politicians to be cautious in their public statements on the South China Sea issue has been used to illustrate how many of the Australian domestic media do not agree with the Australian government’s hard-line comments on the issue.

Meanwhile in the Swedish-language Sydsvenskan, headquartered in Malmo, Channel Nine’s Today show has been singled out for some of the most inflammatory commentary on the terrorist-attack-that-wasn’t in that city last week. In broadcast remarks, the show emphasised the high proportion of Muslim residents in Malmo, and reportedly, in a since-deleted tweet, said the attack had taken place on the day of the city’s Pride parade (it was a week away). Police have since said the attacks are not linked to terrorism.

Malmo police commissioner and deputy district chief Mats Karlsson told English-language Swedish publication The Local that the information he was getting on the incidents, part of a local crime wave, were “very different from what I read in the international press”.

“If you want to see a connection [to terrorism] you see one. But these articles were extreme, I’ve never seen such distortions before. There were various British newspapers writing about ‘people running for their lives to escape an ongoing attack’, when in fact it was an internal dispute between these two guys.” — Myriam Robin

An inconvenient truth (for Trump). Donald Trump was boasting late last week and at the weekend that his acceptance speech and the closing night of the Republican National Convention attracted more viewers than Hilary Clinton’s speech and the final night of the Democratic National Convention, which is true. But what our Donald didn’t mention is that President Barack Obama’s final night speech for the 2012 Democratic Convention was watched by 35.71 million viewers. According to Deadline.com, the numbers are 34.9 million for the Republicans and 33.3 million for the Democrats. The difference was accounted for by higher audiences for the right-wing Fox News at the Republican convention than the audiences the network attracted at the Democrats.

And there was one other important measure that Trump didn’t canvass: advertising dollars. Here, Clinton and the Democrats did best. According to US data group, iSpot.tv. The Democratic National Convention’s pulled in US$25.8 million in total national advertising, with US$18.1 million spent on cable channels (such as CNN, which was the most watched, MSNBC and Fox). And US$7.7 million was spent on the free-to-air TV networks. iSpot said that some US$22.3 million was spent by advertisers on the Republican Convention — US$5.7 million with the broadcast networks and US$16.6 million on cable networks. Another example of don’t follow the hot air balloon, follow the money. — Glenn Dyer

Front page of the day. The New York Post has unearthed photos of Melania Trump taken 21 years ago for a French men’s magazine … 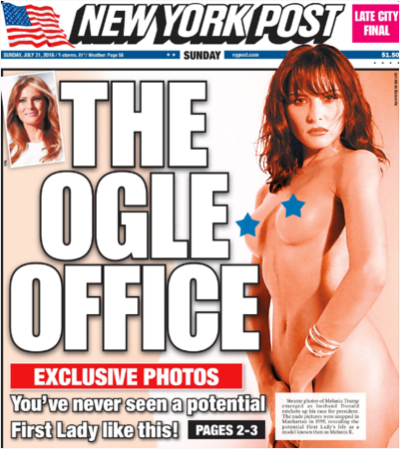 In the accompanying article, Trump takes the publication in stride. “Melania was one of the most successful models and she did many photo shoots, including for covers and major magazines. This was a picture taken for a European magazine prior to my knowing Melania. In Europe, pictures like this are very fashionable and common.”

The Post is generally seen as a pro-Trump outlet. In April, it endorsed Trump for the Republication nomination. The editorial stated that Trump had “never been a professional politician and reflects common-man passions”. — Myriam Robin