And no religion, too. The Australian Bureau of Statistics’ decision to place the option of “no religion” above the list of different religions in the upcoming census has ruffled feathers in some Christian communities, with people concerned that an increase in people identifying as “no religion” will adversely affect their religions. The ABS made the decision to change the order of options on the question to try to capture a more accurate record of people who do not hold a faith in Australia, believing that when “no religion” was the last option on the census, many who were no longer actively involved in a religious organisation listed the faith they were brought up in. In an opinion piece in Catholic Weekly on Friday, Monica Doumit criticised the Atheist Foundation of Australia’s campaign for more people to check the “no religion” box, and while the piece focuses on what constitutes Christianity, it does make the case for people to tick the “Catholic” box:

“Encouraging people to answer ‘Catholic’ on this census is not about winning a numbers game against the atheists (as sweet as that victory would be!) It is about reminding people who would be tempted to think that their lives are such that they could never be part of the Christian family that there is nothing which can separate them from the love of God.”

It’s not just the Catholics. Christian website Salt Shakers has written about an email that is being forwarded that includes the following information:

“Bear in mind that although many Australians have no religion these days, the Muslim population in Australia will all declare that they are Muslim and this fact will be counted to ascertain what type of country we are in regard to religion. Even though you may now have no religion, please consider entering the religion you were christened or born into, when answering this question. Otherwise in time Australia will officially be declared to be a Muslim country — because the Australian Bureau of Statistics Census will reflect this. Just imagine the repercussions if that were to happen. For Australia’s future please pass this message on to your family members and friends.”

While Salt Shakers quotes the email, it doesn’t seem to endorse its contents. Salt Shakers encourages readers to talk about Muslims who feel afraid to declare their religion on the census. At the last census, 22% of Australians identified as having no religion, the largest number in the population except for Catholics, who were 25% of the population.

Ob-la-di, ob-la-da. A month after the July 2 election, the people of Herbert finally have a result, with Labor’s Cathy O’Toole coming out on top of sitting Liberal MP Ewen Jones by 37 votes. While there are rumblings and threats of a new election by some in the LNP, Jones has reacted to the result in good form, posting this tweet this morning:

Hanson on Hanson. Last night Pauline Hanson used Facebook to live-stream her watching a documentary about herself, in an attempt to make sure that she had the right of reply throughout SBS’s Pauline Hanson: Please Explain.

“So this is on my life in politics from 1996 to 2004 and leading up to the last state Queensland election and this one. What I’ve seen in the promos I haven’t been impressed at all. So although its called Pauline Hanson: Please Explain, if the truth is not portrayed in this documentary I am going to be asking SBS for a ‘please explain’, myself.”

The video goes for the full hour and a half of the doco, and while it had the potential to become a Gogglebox-style smash hit, full of hot takes and commentary, Hanson is actually quiet and still. At the start she says “that’s rubbish, absolute,” but because the volume of the television is low, it is unclear what she was referring to. She blinks and shakes her head at times, but rarely commentates. At the end she says, “Um it’s um I just don’t know how I feel about it … I suppose it’s up to the people what they get out of it.”

She defends herself, saying that the message is about standing up for what you believe in. Maybe Hanson needn’t have worried — the show didn’t rate too well in regional Australia, where many of her voters live. About 139,000 people in regional Australia watched it live, where it was the 22nd most popular show of the night. It did better in the five main capital cities, with 405,000 viewers making it the 14th most-watched show. If you haven’t watched it, Ms Tips thought it fantastic television, benefiting from close contact with both Hanson and her campaign teams both past and current, as well as interviews with some of her biggest critics. It’s on SBS On Demand if you missed it the first time. We’ll leave the option of watching it with Hanson’s audio commentary up to you.The full video from Hanson is here and from SBS here.

Patrick … something. A tipster watching Star Trek on Foxtel on the weekend found this captioning effort interesting, with a surprise cameo listed by Patrick Swayze — the film actually features Patrick Stewart in the role of Captain Jean-Luc Picard. 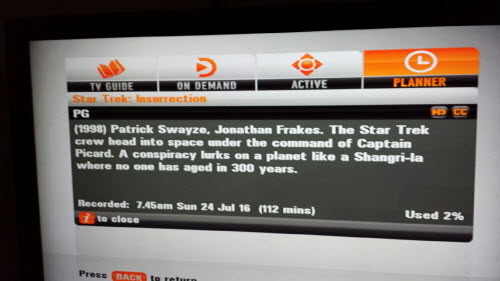 How could Australia become a Muslim country if the majority tick the ‘no religion’ box? Assume that somehow the Muslim population increases to 5%. If the total for the other religions drops to less than 5%, then the ‘no religion’s would have to be more than 90%.

Officially as well as practically Australia would be a secular country.

Did Ewen tweet about his trip to South America with Bronwyn?

A good reason for an accurate Census?