Brand-new royal commissioner Brian Ross Martin says he’s the right man to look into allegations of abuse of young prisoners at the Don Dale facility, and that neither he nor any other Supreme Court justice had any inkling of what was going on there. But that turns out not to be true. In June 2014, […]

Brand-new royal commissioner Brian Ross Martin says he’s the right man to look into allegations of abuse of young prisoners at the Don Dale facility, and that neither he nor any other Supreme Court justice had any inkling of what was going on there. But that turns out not to be true. In June 2014, the NT Supreme Court upheld the not guilty verdict of a guard at Don Dale — who had been accused of assaulting none other than its now most famous inmate, Dylan Voller.

And there are other thorny questions. Tucked away on page 240 of Brian Ross Martin’s 570-page door-stop report of the inquiry into the establishment of a Northern Territory Anti-Corruption, Integrity and Misconduct Commission is the instrument of his appointment, dated December 14, 2015.

Consistent with the appointment of commissioners in similar inquiries in the NT — reference the appointment of former federal police deputy commissioner John Lawler to the NT’s Stella Maris inquiry — Brian Ross Martin’s appointment was made by the Administrator of the Northern Territory following the receipt of advice from the NT government’s Executive Council.

The appointments of John Lawler and Brian Martin to their respective inquiries share another element. Below the signature of the NT Administrator on both instruments sits another, larger and more florid signature. That signature — perhaps an affectation, perhaps adopted from a nickname — simply reads “Elf”. 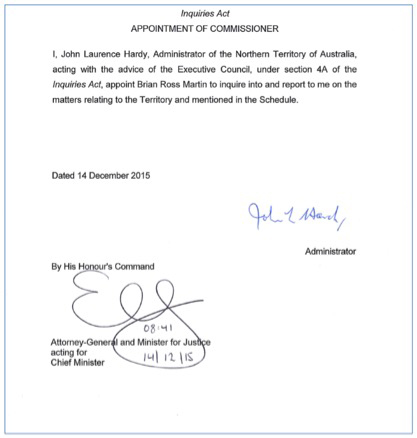 The “Elf” is Johan Wessel “John” Elferink, the NT Attorney-General and, until Tuesday this week, the NT’s Minister for Corrections at the centre of the scandal that caused him to be sacked by NT Chief Minister Adam Giles following the broadcast of the Four Corners report last Monday night.

To be fair, the Elf was, as Brian Ross Martin’s instrument of appointment makes clear, acting on behalf of Chief Minister Adam Giles. But it was John Elferink as Attorney-General who three-and-a-half months earlier on August 26, 2015, introduced a motion in the NT Legislative Assembly that led to the establishment of the inquiry he signed off on in mid-December that year. Brian Ross Martin’s report on the Anti-Corruption, Integrity and Misconduct Commission inquiry was tabled in the NT Legislative Assembly by Adam Giles on June 27, 2016, the last day of sittings for Adam Giles’ troubled minority government.

[The most shocking thing about the Four Corners footage: the abuse was legal]

Yesterday afternoon Prime Minister Malcolm Turnbull announced that Brian Ross Martin — known as the “Black Prince” in some circles — had been appointed as Royal Commissioner to inquire into the NT’s youth justice system.

I’ll bet London to a brick that Elferink will be called to appear before the Martin Royal Commission as a witness. Elferink’s involvement in the establishment of the anti-corruption body inquiry, and his role in the appointment of Martin as commissioner to lead that inquiry, may well result in some uncomfortable moments in the commission — both for Martin and for Elferink.

The NT Supreme Court website records that Brian Ross Martin continues to serve as an additional judge of the Supreme Court of the NT since his appointment in December 2010.

None of this should be seen as a reflection on Martin’s capacity to conduct a thorough and rigorous royal commission. He is widely regarded as a jurist — particularly in relation to criminal matters — of the highest order.

But that does not mean that Martin cannot misstep or mistake. His appointment has already attracted criticism and will no doubt attract more in coming days.

Aboriginal organisations in the NT have lined up to demand some role in forming the composition of the commission and in the drafting of the terms of reference. There have been any number of calls for the commission to cast a wider net and examine similar concerns about youth detention outside of the NT.

There were also early suggestions that this royal commission provided Turnbull with an opportunity to cast a wider net of his own in choosing a female commissioner — former High Court Justice Susan Crennan has been mentioned — to run the commission. And rightly or wrongly, Adam Giles will — by the appointment of an NT judge to oversee a narrowly focused and “quick and dirty” inquiry — be seen by many as having very much got his way.

But Martin might have already made at least one misstep. A transcript of the joint press conference held by Prime Minister Malcolm Turnbull, Attorney-General George Brandis and Martin yesterday afternoon announcing Martin’s appointment has this question directed to Turnbull.

REPORTER: Prime Minister, given nine out of 10 children in the Northern Territory in the detention system are Indigenous and I haven’t heard the word ‘racism’ once in the terms of reference, are you all satisfied racism doesn’t play a role here?

BRIAN ROSS MARTIN: Look, I think it is appropriate for me to answer that question. Whether racism does or doesn’t play a role will be part of the inquiry.

It is a brave man indeed who presumes to answer for a Prime Minister.

Later a reporter posed this question of Martin aimed directly at his familiarity with the NT and the potential for claims of bias:

REPORTER: Given you have spent so much time in the Northern Territory in this justice space, are you concerned there may be any perception of conflict of interest?

BRIAN ROSS MARTIN: I don’t think so. I can’t see how that would arise. There’s never been any suggestion that this sort of treatment was brought to my attention or the attention of other Supreme Court judges. I don’t see that at all. I see the advantages of a knowledge of the Territory. And to answer the question earlier, those who are disillusioned I encourage to come forward. There’s their way in to make their views and their concerns known so that they can be properly assessed, and addressed, as best we can. (emphasis added)

There is no reason to doubt Martin’s statement — made presumably in relation to his time sitting as a judge of the NT Supreme Court — that he had not dealt with any matters involving claims of abuse of youth in detention, but in the course of his duties as a Supreme Court judge he would have invariably received pre-sentencing reports from corrections officers and had young defendants before him facing serious charges.

[Giles and Scullion, two sides of a debased political coin]

But the underlined statement above — that concerns about the treatment of juveniles in detention had never been brought to the attention of his colleagues on the NT Supreme Court — is wrong.

As Four Corners showed on Monday night, a 13-year-old Dylan Voller was assaulted while in custody at Aranda House in Alice Springs in December 2010.

Three years later, in December 2013, Derek James Tasker appeared before NT Stipendiary Magistrate Daynor Trigg in the Court of Summary Jurisdiction in Alice Springs charged with the unlawful assault of Dylan Voller, with the aggravating circumstances that Voller suffered harm, that Voller was under 16 years of age and that Derek Tasker was an adult and that Voller was unable to effectively defend himself due to age and physique.

In finding Derek Tasker not guilty as charged, Trigg held that, in all of the circumstances of the case, he was not satisfied that the prosecution had proved beyond all reasonable doubt that Tasker applied unreasonable and/or necessary force to Voller, leading to the conclusion that he could not find that Tasker “unlawfully” assaulted Voller.

In June 2014 the prosecution appealed to the NT Supreme Court before Justice Peter Barr, who dismissed the appeal, finding that the appellant had not established any error in Trigg’s findings or in the conclusions he reached.

Late yesterday the Northern and Central Land Councils* and the Aboriginal Medical Services Alliance NT (AMSANT) released a statement condemning the commission as being “compromised from the start”.

“The appointment of Brian Martin does not satisfy any threshold of independence.  On the facts and on perception, the appointment is unacceptable.

“Only a few weeks ago Brian Martin delivered to the NT Government a report about the establishment of a regime to investigate corruption, at the instigation of the now disgraced and former NT Corrections Minister, John Elferink.  Mr Martin accepted that commission and was paid for it, so how can Mr Turnbull boast his independence from government? …

“This appointment is wrong for all manner of reasons, and Aboriginal people in the Territory will not have confidence in the appointment of Brian Martin. As Chief Justice, he sat at the apex of the NT’s justice system. He presided over all judicial officers who sentenced young Aboriginal offenders to detention, and he knew them all; he himself sentenced juveniles to detention.”

*Bob Gosford is employed by the Central Land Council as a legal officer.

He seems to have form if this article is to be believed: https://newmatilda.com/2016/07/28/nt-juvenile-detention-abuse-royal-commissioner-needs-no-introduction-to-black-territorians/

It just calls Turnbulls judgement into question yet again.. appointing a former chief justice of the NT… WTF goes through the spivs mind is a mystery.. This inquiry is fucked before it even starts..

The terms of reference, and the commissioner, should have been beyond questioning…especially by the indigenous people of the NT.
The are not! Perhaps you should have another attempt at getting it right, Talcum!!
And leave that poor excuse for a ‘truthful’ politician, Giles, OUT of the equation entirely.