The Daily News wants to lock Donald Trump up. And other media tidbits of the day.

Jensen on Jensen. Does The Saturday Paper make money? The latest guest on the Penmanship podcast is its editor Erik Jensen, who says: it does.

“Happily, the paper has either made money or broken even every issue since launch,” he told freelance journo Andrew McMillen. “It’s really working … there is a viable way to treat people seriously, to find an audience who enjoys being treated that way and is willing to pay for it.”

Before the paper launched two years ago, Jensen resigned from the SMH to spend 18 months at Schwartz Media thinking and testing how to best make it work. “Each fundamental assumption we made in terms of testing what a newspaper has been turned out to be an assumption that we came down on the right side of,” he said.

Jensen, who has achieved a great deal of success at a young age (he’s 27), was recently the prospective subject of an Australian Story episode. But the ABC, he reveals in the podcast, stopped filming halfway through.

“They ultimately decided I was too boring to be a subject of Australian Story. Which is really a confronting thing to be told by a producer. ‘Yeah, we’ve been filming you for about 20 hours now, and there’s actually nothing there. You are incredibly boring.’

“But I’ve dealt with that news and I’ve made peace with it. In one of these long interviews … the reason people cry on Australian Story is not because it’s really tender documentary making. It’s not because these people are confronting great trauma or tragedy. The reason people cry in Australian Story is because those interviews go for like 8 hours. It’s like water boarding. By the end, you’ll be talking about what you had for breakfast and then burst into tears and want to give them the nuclear codes. It’s like Guantanamo Bay.”

TV ad revenues tumble. Seven West Media, the owners of the Seven Network, has advanced the announcement of its 2015-16 results to next Tuesday, August 2 — more than three weeks earlier than last year, as well as in 2014 when the announcement came on August 25 and 27 respectively. The earlier-than-normal announcement is to allow the company’s senior executives to jet off to Brazil to make the opening ceremony on Friday night/Saturday morning. The top dogs at the network could be out of the country if the ACCC doesn’t release its decision on the takeover of News Corp’s Perth-based Sunday Times and website until after Tuesday. At the same time the axe is expected to fall on around 30 people at The West Australian later today as the $10 million in cost cuts ordered by the board, finally hit home.

Seven, though, will have something to talk about at Tuesday’s briefing, judging by its performance in the January-June period ad revenues. The combined ad revenues for the three network were terrible. They hit their lowest level for the first half of the year since the depths of the GFC in 2009. Total ad revenue for the sector in the six months to June was $1.74 billion, down 4.3% from the same period in 2015 and the lowest since 2009 when the economy was emerging from the GFC. Metro market revenues fell 3.89% to $1.35 billion, also the lowest since the first half of 2009 when the figure was $1.17 billion. While regional revenues fell 5.7% to $389 million, which was the lowest since 2009. The three networks took in $3.7 billion last financial year, down from $3.8 billion in 2014-15, and nearly $300 million under the peak in 2010-11 of $3.99 billion.

And even though inflation has been weak for most of the past eight years, it still would have carved a hole in the gross figures, worsening the slide. In fact since the June quarter of 2012, inflation is up around 8%, according to Australian Bureau of Statistics figures. That’s impacted budgets, costs (even though the networks have all attacked costs month after month) and revenue growth; it has been going backwards now for years. Another round of job cuts seems to be brewing if the size of the falls in the June half-year is repeated in the current six months, which is when revenues rise, boosted by the Christmas period at the end of the year. — Glenn Dyer

NYT slides. For the New York Times Co, the three months to June was the second quarter in a row where print and digital ad revenues fell, offsetting encouraging news on subscriber growth and circulation revenue gains. While digital subscriber growth was up, rising 22% in the June quarter from a year ago (which helped push circulation revenues up 3% to US$219 million, along with higher home delivery prices), ad revenues fell by 12% to US$131.

Digital advertising fell 6.8%, down for a second consecutive quarter, while print advertising revenues dropped 14%, to US$45 million. The NYT added 51,000 net digital-only subscriptions in the quarter. It also added 16,000 new subscribers to its separate crossword puzzle offering for a total of 212,000 at the end of the quarter. Revenue fell 2.7% to US$372.6 million in the quarter, from US$383 million a year ago. Despite that, digital advertising revenue now accounts for more than a third of the company’s total ad revenue, but that’s still not enough.

In April, the paper announced that it would cut 70 jobs and move some editing and production operations from Paris to New York and Hong Kong as part of a restructuring of its international print edition operations. Around 80 union-covered employees in the US took up a voluntary contract buyout round that closed earlier this month. — Glenn Dyer

Front page of the day. Probably for the best. 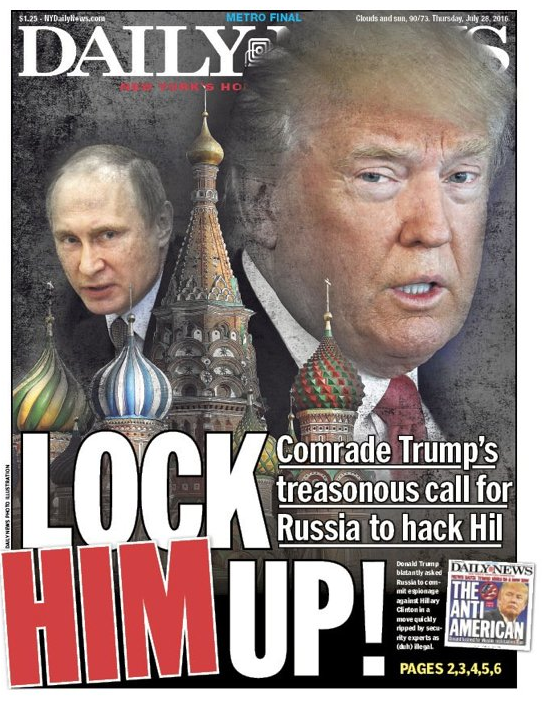