No info for you. How quickly can a freedom of information request be answered? Very quickly, when the answer is a no. While many in the Northern Territory government have claimed that information and footage in Monday’s Four Corners report on the treatment of youths in the NT’s Don Dale juvenile detention centre was new to them, other reports have stated that ministers were told about practices. Crikey lodged an FoI request with the Department of Correctional Services yesterday regarding ministerial briefs from August 2014 until now “related to the use of tear gas, or spit hoods at the Don Dale juvenile detention facility”. Today, sadly, our FoI was rejected, as the act exempts disclosure of information that could come before a royal commission.

Stars come out. A host of state and federal pollies, led by Arts Minister Mitch Fifield, and a smattering of vaguely recognisable screen stars (Hugo Weaving the brightest) suited up to walk the blue carpet for the opening of Australia’s biggest film festival in Melbourne last night. Oscar winner Geoffrey Rush acts as enthusiastic patron of the Melbourne International Film Festival, and he stole the show of long speeches at Hamer Hall with some freestyle rap to the rhythm of New York musical phenomenon Hamilton, with a little “Memory” from Cats mixed in. Our Geoffrey sure knows how to get a party started (that, and the night’s vodka major sponsor). Local low-budget flick The Death And Life Of Otto Bloom, from first-time feature-maker Cris Jones, had the honour of opening the two-week film marathon — producers took to the stage to remind the audience that we (taxpayers) had primarily paid for it. We’ll let the critics decide whether it was worth the money …

Wonder what happened to him? We reported earlier this week on the launch of former channel Nine cameraman Nicholas Lee’s memoir All This in 60 Minutes, which has been promoted as a juicy gossip-filled tome from someone who was always behind the camera, instead of in front of it. While the book contains many anecdotes of the late Kerry Packer, it also includes this tidbit on one young journo who has the ability to go far:

“In one of my first assignments I was told to meet our new political reporter Malcolm at NSW Parliament House. He looked twelve, seemed like a good bloke and pretty bright. I asked him how long he’d been a journo. He replied, ‘Oh, I’m not a journalist, I’m a uni student.’ I stared at him in horror and thought, ‘Shit, now I have to train some amateur’.

“Within a few weeks, the assistant cameraman Jim Chrystal and I were amazed by how professional the uni student was and how quickly he’d picked up this TV gig. We congratulated ourselves: how skilled we were as trainers! And just as we began to really enjoy working with our new reporter, he told us he was leaving because he’d won a Rhodes Scholarship. Jim and I were both disappointed and thought, ‘Damn, that’s a shame, this Malcolm Turnbull guy might have had the ability to go all the way.’ We even reckoned he had it in him to one day become our chief reporter.”

Greg Hunt says … something. New Industry, Innovation and Science Minister Greg Hunt seems to be taking to his new portfolio like a duck to water, if his speech at Wednesday night’s Australian Public Service Innovation Awards is anything to go by. Hunt presented awards to different departments and commented at length about the importance of innovation in both the private and public sectors. Our tipster tells us that for the most part, the speech was top notch, until Hunt showed that he really was in the start-up vibe by saying a lot of things that made very little sense at all:

“They are, it’s the understanding of the way electrons and neutrons move, the impact that has in terms of creating new products for people. And so that’s what were seeking to do through the private side.”

Electrons and neutrons, yes. For background, only electrons really move freely around anywhere, unless you count the vibration and tiny “movement” inside the atomic nucleus, where neutrons are stuck with protons. Hunt also talked up innovation in his previous portfolio of environment, but we’re not sure it left attendees feeling that he really did have the credentials for innovatey-newness:

“The examples that I know of from my work with Gordon [de Brouwer] in the Environment Department: the work around reverse auctions and the emissions reduction fund was pioneering and is now world-leading.

The work of the threatened species commissioner is another example of doing things in a completely different way and it defied expectations and it has been brilliant success of engaging the public where you have the public sector as champion, and the public engaged and inspired by, you know, a brilliant young indigenous leader talking who is talking on behalf of all Australians.

“And then of course the work on the reef — which has been hailed around the world — through the reef trust and the reef fund. All new ways of doing things.”

That would be the Great Barrier Reef that may soon be on the UN World Heritage Committee’s “in danger” list, a label that Hunt campaigned against, and also had removed from UNESCO’s report on climate change. Innovative.

Freedom Kids v Trump. The father of one of the Freedom Kids, the viral sensation brought to global prominence by their performance at a Donald Trump rally, is suing the Trump campaign for reneging on a deal over the performance. The Freedom Kids, for those who are fortunate enough to have forgotten, are these three girls, who sang “Freedom’s Call” at a Trump rally in Florida in January: 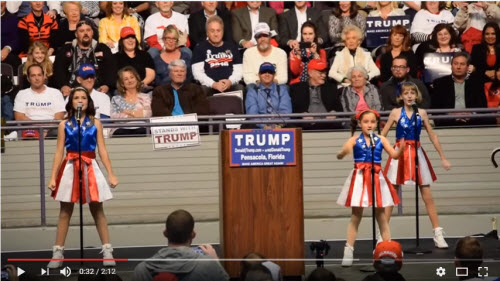 Jeff Popick, father of the smallest Freedom Kid, is suing Trump’s campaign, and has told The Washington Post that he has to show his girls “the right thing” after Trump’s campaign reneged on verbal agreements for extra performances and the chance to sell merchandise at rallies:

“After that, he kept reaching out “again and again and again and again,” without luck. He was passed around between staffers; calls went unreturned even after calls were promised. Emails Popick sent to the campaign (which he shared with The Post) detail the interaction between himself and the campaign and his ultimate request. ‘We are now asking and DEMANDING for what has been promised to us and is now long-overdue (and has been rightly earned by us); that is, a performance at the convention,’ an email dated July 9 reads. ‘Or, be made whole.'”

According to the Post, Popick expects to file a lawsuit within the next few weeks.

Greg Hunt says … something innovation something

Hunt the dud (but we’re wrong on Abbott)

Who made Don Dale’s tear gas?

What a wonderful illustration of why hand in hand, Correctional Services cultural over-reach, and Politicians’ propensity to abandon reason in favour of votes; has achieved national notoriety in order to keep the outside world in the dark?