It's time for a female president. Some have waited almost a century.

Geraldine Emmett was six years old when women were finally given the vote in the United States. When her mother cast her first ballot, she gathered her children around to witness history in the making. Emmett told USA Today:

“We all walked out in the middle of the street and cheered, like they’re cheering here — because my mother was going to get to have a say! That was something!”

On Tuesday, Emmett pledged 51 of Arizona’s votes (incidentally, Emmett was born just two years after Arizona became a state, in 1912) for Hillary Clinton.

“I cried! I never cry. It’s just another chance to show what all women have the ability to do. We don’t want to take over the world, we just want to share it with everybody.”

Clinton has now accepted her party’s nomination as its candidate for president. Whatever you think of Clinton, and many do not think of her favourably, her nomination is historic, and it’s about damn time. And that’s not just tokenism, or inspiration porn. People have different lived experiences, and a leadership of middle-aged white men will inevitably pass policy to favour middle-aged white men. Reproductive healthcare, the gender pay gap, the expectation to take on the bulk of childcare responsibilities — these are policy areas that affect women more. And a diversity of opinion and experience in policymaking can only be of benefit.

We can, and many will, debate whether she is progressive enough, independent enough, sincere enough, honest enough. But she is America’s only chance at avoiding the horror show of a Trump presidency. And today, at least, it is hard not to be swept up, like this 95-year-old grandmother on Twitter … 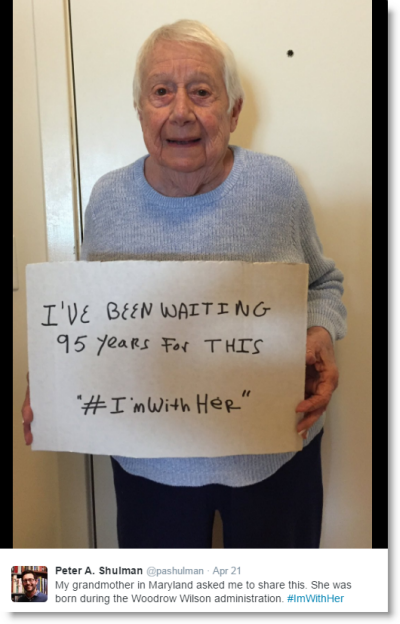 Just pointing out the date on that tweet is 21 April…

A good old boy with a vagina gets dixiecrats nomination, very inspirational.