Australia's shame is heard around the world. And other media tidbits of the day.

Online journos hung out to dry. Digital news outlets are undercutting the legacy media on pay and conditions, able to get away with paying their journalists far less because no industry award exists that covers journalists who work for online-only outlets.

This means in the absence of an enterprise bargaining agreement, which are as rare as hens’ teeth in digital media, journalists filing for online-only outlets are covered only by the National Employment Standards — a minimum set of conditions that apply to all Australian workers. Meanwhile, outlets with traditional broadcast networks or papers attached operate under the broadcast and print media awards respectively (these awards also cover their digital teams but only by dint of the attached legacy outlet).

The Journalists’ Published Media Award, last reviewed in 2010, has a clause explicitly excluding online journalists from its conditions. Journalists union the Media, Entertainment and Arts Alliance has made an application to the Fair Work Commission asking that the award be reviewed to include online journalists in its conditions. The union views this as a key priority given the growth in digital employment for its members.

The Fair Work Commission is expected to hear a case on the matter later this year. In a bid to paint a clearer picture of the conditions of digital workers, MEAA has been surveying its membership who work in online news outlets about their pay and conditions. Of the 150 respondents, only 30% said they feel adequately compensated for their work. The majority (55%) reported no extra pay for working early mornings, evenings or weekends, and for one in five, even public holidays did not accrue any additional compensation. And in comments to the survey, many journalists suggested they are considering leaving the industry altogether because of the poor pay.

“I have dipped in and out of the industry for this reason, and had to take on part-time work in another industry just to make ends meet,” said one respondent. “When you see people in communications roles working less and earning more, it’s very tempting to jump ship and move into that field,” said another.

MEAA director of media Katelin McInerney said the union was determined to bring digital journalists up to the conditions enjoyed by their colleagues in traditional media, especially given the entry of many new digital players in the Australian media market.

“Just because you work for a digital outlet rather than one that still publishes in ink on paper does not mean you should miss out on basic conditions like shift allowances, overtime pay or public holiday loadings,” she told Crikey. “There have been numerous new start-ups in this field since the print journalists Award was last updated, and the Award does not recognise the different working patterns of digital journalists in the 24-7 news cycle.

Guthrie’s ABC. New ABC managing director Michelle Guthrie has “resisted the temptation” to use her first major speech since coming to the position three months ago to lay out a new “masterplan” for the network, instead speaking on the broadcaster’s perennial challenge of remaining relevant to all the Australian population, 30% of which does not view its content.

Speaking at a conference on creativity in business organised by The Australian  (the newspaper “obtained” an extract of the speech before anyone else) and introduced by none other than noted ABC critic Chris Kenny, the former News Corp exec highlighted the fact that 86% of thought the ABC provided a valuable community service, according to ABC-commissioned polling, with 49% saying it provided a “very valuable” service.

Guthrie dismissed views that the ABC was “safe” from the commercial and technological pressures requiring massive change from the rest of the media sector:

“There is a perception in some circles that the ABC is lucky, that its funding model, built on public funds, provides it with a safe haven within a very disruptive media landscape …

“[I] dispute the notion that the ABC is in any way ‘safe’.  My experience across a range of organisations here and overseas is that no one is protected in this volatile environment.  Neither competitors nor customers will give any company a pass to longevity.”

And anyway, she said, in this time of great change, the ABC was valuable to the media sector as well as the broader community — it served as an R&D lab for the broader industry, “pushing boundaries and explore audience and distribution opportunities without the need to immediately monetise those initiatives”.

Guthrie said the ABC had to be available in every way people might want to watch it.

“The idea that the customer has to come and find you and must play solely within your boundaries is now obsolete.  Consumers want a seamless, networked universe.

“If they go to Netflix, why shouldn’t they find ABC content?

“Or if they go to a Fairfax or News Corp site for example, why can’t they log in with Facebook?

“My daughters refuse to visit 10 separate destinations for all the entertainment and information they want. They want to be entertained, but do not want be told that they must queue up at a particular location, or at a particular time, to enjoy the experience being advertised.”

The ABC already derives a considerable amount of revenue from commercial activities and partnerships — in 2014-15, 15.1% of the ABC’s total revenues came were “own-sourced income”, the result of its events division, its publishing arm, and sales of ABC-produced content direct to the public and to streaming services like Netflix and Presto. — Myriam Robin

ABC veteran to Fairfax. Gold Walkley winner Mario Christodoulou is returning to Fairfax after several highly successful years at Four Corners, where he was a researcher on many of the program’s most influential investigations. An email from the SMH‘s Darren Goodsir and the Age‘s Mark Forbes announced the poaching to staff this morning.

“Mario has been a stalwart at the ABC for many years. However, in recent times, he has worked with Adele Ferguson on co-pros [co-productions] with the Age and the Herald on the Commonwealth Bank financial planning and insurance exposes. his painstaking, and compelling revelations, across a diverse range of topics, has seen him recognised many times at the Walkleys, including the Gold in 2014 with Adele, the Quills, and the Kennedy awards.”

Earlier, Christodoulou won a Walkley while at Fairfax’s Illawarra Mercury for his coverage of local corruption. He starts at Fairfax on August 8.

King of the ad revenue hill. More than ever, the latest quarterly report from Facebook reveals why much of the legacy media’s time is numbered in years, not decades. The monster that Mark Zuckerberg built and runs is swallowing ad revenue at such a rate that you have to wonder if the management of existing print and broadcast (and streaming) media companies, can do anything to change the situation.

In the next year, Facebook’s revenue will probably top US$26 billion — even more — while the revenue growth in every major media company slows or falls (in the case of print). And worryingly for established publishers, Facebook is growing audience engagement on mobile devices. The number of users who visited the site on a mobile device every day, rose above 1 billion for the first time, reaching 1.03 billion. That was 91.6% of all its daily users, up from 90.1% in the June quarter of last year. US analysts pointed out that mobile advertising now accounts for 84% of its mobile revenues, two percentage points higher than the first three months of this year.

And CEO Mark Zuckerberg said the company was “particularly pleased with our progress in video”, which would eventually be “at the heart of all our services”. The latest quarter brought the release of the Facebook Live video service to all the network’s users, turning it into an instant online hit. No wonder all media companies, print and broadcast and streaming video, are feeling the pain and are worried — there is worse to come.

And how can any other company compete, even the mighty Alphabet (Google)? Mark Zuckerberg told an analysts’ briefing that Facebook is transmitting 60 billion messages a day, which he claimed was triple the peak level of SMS messages. Facebook also pointed out that its average revenue per user (ARPU) topped US$50 on an annual basis for the first time in the June quarter. That’s much higher than revenue from other markets. — Glenn Dyer

Cuts are coming. The financial position of the Guardian Media Group (GMG) — owners of The Guardian and Observer newspapers, plus some of the most viewed news websites in the world — suffered a huge blow with this week’s leak of the 173 million-pound loss (A$300 million) figure to the Financial Times.

On top of that — as the company was being battered by falling print ad revenues, and a small and telling drop in digital revenues — management was, unbelievably, allowing staff numbers to continue growing. No wonder there was a revolt among staff at the papers, especially the new managers and editors, to the ascension of long-time editor, Alan Rusbridger, to the chairmanship of the Scott Trust this year. He went to sleep in what was to be his last year running the paper ahead of his move up to chairman.

The annual report shows that total staff numbers increased to 1813 in the year to March 2016, up from 1650 a year earlier. These included 1050 editorial and production staff (up from 925). So it’s no wonder that the company looked for staff and other cost cuts and, as a result, 268 staff have taken voluntary redundancy, including 69 in editorial. And 60 unfilled jobs will be closed. The impact of voluntary redundancies was taken into account in this year’s figures, and will take staff numbers at Guardian News and Media down to 2011-2012 levels. — Glenn Dyer 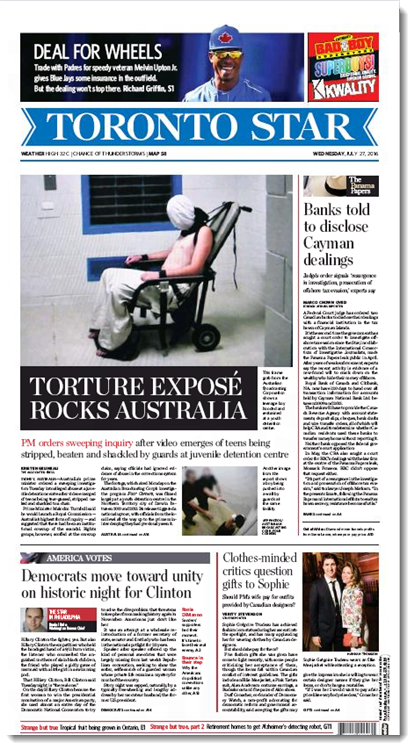