Apple won't let banks pass on fees around mobile payments. They're complaining to the ACCC for a better bargaining position.

Many of Australia’s biggest banks are begging the consumer watchdog to let them gouge customers who want to pay for things with their mobile phones.

Banks hope the Australian Competition and Consumer Commission will let them team up to negotiate with tech giant Apple to charge customers fees. Three of the big four — Commonwealth, National Australia Bank and Westpac — plus Bendigo and Adelaide Bank applied yesterday to engage in collective negotiations with the three big guns of mobile payments: Apple, Google and Samsung.

Australia has a high rate of smartphone adoption and advanced payment technology. But we lag behind the United States in mobile payments because Australia’s banks have been reluctant to engage directly with the technology companies and sacrifice a portion of their revenues.

In order for a bank to allow mobile payments at checkouts or other places with terminals that allow near-field communications payments, the bank needs to enter into an agreement with the technology company to get their card included in the mobile payments application. These are the negotiations the banks are now seeking to band together on.

The application — seeking a three-year window — argues it’s too difficult to negotiate individually with the tech companies to ensure a “competitive outcome” because together Apple and Google’s Android represent 90% of smartphones in Australia. The banks argue Google has “significant bargaining power” in using Android Pay because of its control over the operating system, while Samsung (which uses Android in its devices) has power over its hardware.

But Apple, having both control over the operating system and the hardware, has more power than both, the banks argue, with a higher portion of market share. Those who use iPhones are a lucrative market for the banks, too, says the submission:

Apple has had banks over a barrel and is reportedly asking for a significant percentage of interchange fees, which adds up to millions of dollars. In the US this is 0.15% per credit card transaction and 5 cents for each debit card transaction. Apple prevents banks from passing on these fees to customers — something Australian banks are railing against:

“This brings with it the potential for [banks] to set price signals to their customers that reasonably reflect the additional costs of using Apple Pay and recover those costs from the customers that cause them.”

And then there’s fraud. Banks normally wear the cost of fraudulent transactions on cards but they want “restrictive fraud prevention mechanisms” in place for mobile payments. They are finding it difficult to negotiate this with the tech companies on an individual basis. Collective bargaining, they argue, is the only way ahead:

“Collective negotiation will be required in Australia to overcome the disadvantages the applicants will face in individual negotiations (in terms of size, bargaining power, and regulatory and information asymmetries), and to achieve the most efficient and optimal outcome that will preserve and increase competition and best practice principles in mobile payment and mobile wallet services.”

Currently, iPhone users can use Apple Pay if they have an account with ANZ or an American Express credit card. CBA’s profit after tax last year was $9 billion. NAB’s was $6.3 billion and Westpac collected $8 billion. 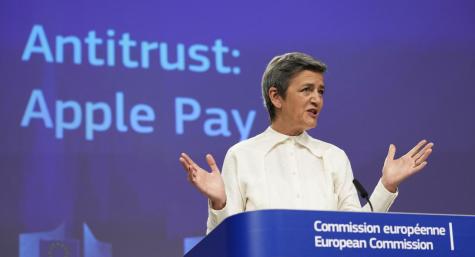 So 4 of the most profitable banks in the world, having almost all of the Aust market between them, argue, cartel-like, that they are not strong enough to negotiate commercially?

On the other hand, Apple has so much cash in hand they could just buy outright almost any two of the four banks. Not that I have any particular sympathy for them at all in this matter; frankly everyone is involved is terrible and I hope the ACCC comes up with an answer that makes all of them miserable.

While the Banks and Apple and Google negotiate we the people who own the phones and the merchants who are the ones who want to receive our payments will find a way to bypass the tech companies and the banks.