The cat fight in British politics

The top levels of English politics have a hairy problem.

British Foreign Minister Boris Johnson may have given up on dreams of the prime ministership, but that doesn’t mean that one of his colleagues has also given up on getting to the Prime Minister’s address. Palmerston — a cat who lives in Johnson’s Foreign and Commonwealth Office, performing mousing duties — snuck in the front door at 10 Downing Street, only to be removed by police officers. 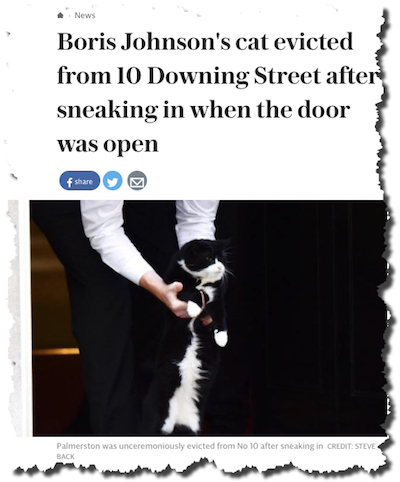 Photos at the UK’s Telegraph show the black and white kitty looking very unimpressed with this result and trying to stare down the police officer who removed him. It’s possible Palmerston was waiting for Larry, the “chief mouser” at No. 10, with whom he has reportedly been brawling in recent weeks. According to the Tele, Larry has a history of fighting with neighbourhood cats; Treasury’s cat Freya was retired to the country after a cat fight with the country’s most powerful moggy. For those so inclined, the paper is also running a poll in which readers can choose sides — Larry or Palmerston.