Isentia Index: Is this the return of captain’s calls? Or the dawn of a decisive PM?

Terrorism, torture and plagiarism all got people talking across the media.

“Overstuffed” ministries, three international tragedies so far and an ABC investigation revealing youth abuse in the Northern Territory’s juvenile detention centre has kept all sides of parliament busy this week, with Opposition Leader Bill Shorten up four places after revealing his shadow ministry, Foreign Minister Julie Bishop completely dropping out of our top 20, and Prime Minister Malcolm Turnbull quickly announcing a Royal Commission into the evidence and allegations from Four Corners first thing Tuesday morning. One Nation Senator Pauline Hanson retains third spot this week, relatively popular with press and online, after meeting with the PM and a public letter from the son of Curtis Cheng asking her to stop citing his father’s death in comments about Islam.

Attorney-General George Brandis has entered our index in fourth place this week, with discussions surrounding same-sex marriage plebiscite returning following vocal opposition from Victorian Premier Daniel Andrews — up three places this week — and Brandis confirming that “not every mass casualty attack is an act of terrorism” as the shooting in Munich on Friday and the Merrylands attack early last week are reportedly unlikely to be linked to a political, religious or ideological cause. Coalition MP George Christensen jumped up 29 places into ninth after reportedly incorrectly describing the Merrylands attack as linked to the Islamic State, and calling for unemployment benefits to last six months.

Other newcomers to our weekly index include Linda Burney, the first Indigenous woman elected to the House of Representatives and named by Shorten in his shadow ministry, Labor Senator Kim Carr into fifth place after rumours of plans to remove him from the frontbench, and Shadow Assistant Treasurer Andrew Leigh after reportedly being dealt a $40,000 pay cut during the reshuffle. New South Wales Health Minister Jillian Skinner has jumped up to seventh place after the Bankstown-Lidcombe Hospital reportedly gave two newborns nitrous oxide instead of oxygen in separate incidents, with one dead as a result and the other left with severe disabilities. 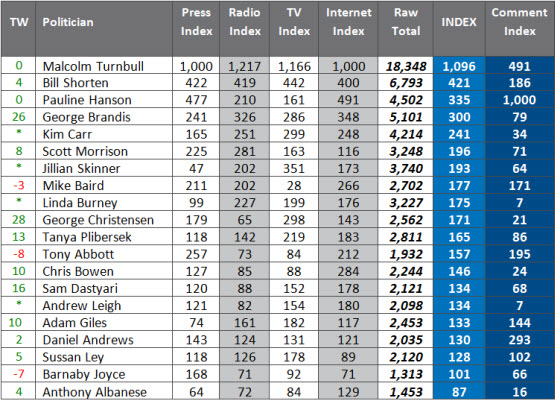 …While there’s an even higher margin between Hanson and Turnbull on talkback across the last week, with the PM in fourth place behind Hanson, Andrews and Abbott.

After reportedly being caught plagiarising a 2008 speech by Michelle Obama at the Republican National Convention last week, I guess we all have to remember another famous quote from Melania, “You miss 100% of the shots you don’t take”. Or was that Michelle too?