Joe Hockey’s big diplomatic faux pas. Yesterday we reported that former treasurer and now Australian ambassador to the United States Joe Hockey had skipped a counter-terrorism meeting with Julie Bishop and Marise Payne in Washington, choosing to stay at the Republican National Convention to see Donald Trump deliver his speech to the party faithful. It was quite the snub, with Hockey ignoring convention that the ambassador be on hand to meet the minister, especially as Bishop is Hockey’s boss. Today, a tipster who has experience in such matters says Hockey:

“… should have dispatched the Deputy Head Of Mission or Political Counsellor to the GOP Convention, and the Dems in Philly this week too. There will be no serious work to do at either convention (tweeting is not serious work) and if he is just networking then he could just as easily do that in DC before and after the Conventions.”

Hockey’s attendance at the RNC can’t be viewed as a sign of his political allegiance, as he is already in Philadelphia for the Democrats’ conference. Our tipster says “the serious work in Australia’s national interest will be done in DC with Bishop and Payne, and Hockey is once again missing in action”. We were also reminded of a story that appeared in Crikey back in 2005, when Alexander Downer was minister for foreign affairs and had a particularly pointed reaction when ambassadors didn’t abide by his exacting standards. From the archives:

“John Campbell was ambassador to Chile when Downer arrived on an official visit in 1993. Because of an honest misunderstanding, the embassy’s official car was not at the airport to collect the minister, who had to take a taxi. Later during the visit, the car developed mechanical trouble. Not long afterward Campbell was recalled to Canberra and he subsequently took early retirement from DFAT.

“When Jeff Kennett, as Victorian premier, visited Greece, the ambassador Dr Robert Merrilees arranged for him to meet the Greek president and prime minister — Kennett’s itinerary was arranged long before his visit and input from the Melbourne Greek community paved the premier’s way in Athens. Not long afterwards, Downer was accorded neither privilege — as it turned out the president was away and the prime minister’s diary was full. Merrilees was recalled and took early retirement.”

Looks like Hockey is lucky that Bishop, not Downer, is in the office.

What’s in a James Packer meme? Billionaire James Packer and his fiancee, singer Mariah Carey, are just as loved up as ever, as these incredibly newsworthy photos (ahem) from an Italian nightclub show. The pair have been enjoying the European summer aboard Packer’s Arctic P yacht, with Carey’s entourage and list of demands causing quite the stir among other staff on board. Channel Nine’s Karl Stefanovic also managed to pop by while he was in France covering the Nice massacre. But while we are analysing the lifestyles of the rich and famous, there is of course a downside (however small), with the pair unwittingly becoming a meme, shared by social media users who have no clue who Packer is and only vaguely know Carey … 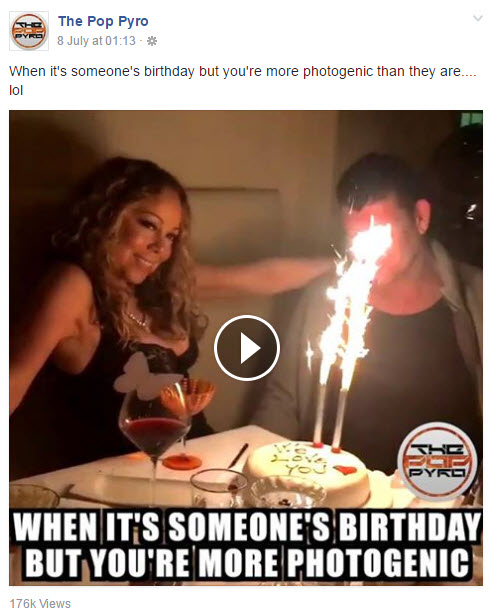 This video is being shared around Facebook, mainly by pages that specialise in sharing memes, animal videos and nothing of real consequence. The caption is “when it’s someone’s birthday but you’re more photogenic” and shows Carey posing for cameras while Packer avoids having his eyebrows singed by the pyrotechnics on his cake. It’s unclear how old the video is — Packer’s birthday is September — and the cake’s message reads “we love you” so there’s no reference point. But it just goes to show: have you really made it if you are worth billions but haven’t been made into a meme?

The absentees at 60 Minutes book launch. The launch of 60 Minutes cameraman Nicholas Lee’s book on Sydney’s northern beaches on Sunday was a jolly affair. Publisher Allen and Unwin quickly sold all the copies of the book — All This in 60 Minutes — which covers Lee’s adventures over 30 years with the program. Channel Nine veteran Ray Martin did the launch, but other Nine luminaries were not seen at the afternoon function — George Negus, Ian Leslie, Jana Wendt, Gerald Stone and Peter Meakin were not present to get their hands on what is described as a very gossipy memoir. They may not have come, been invited, or sent RSVPs. Some of the “dinosaurs” of the program that changed Australian TV mused about how it had become an afterthought, with a fluctuating timeslot instead of the hard and fast 7.30pm Sundays it had for years. But from the talk on Sunday afternoon, the Beirut adventure has damaged 60 Minutes‘ reputation more than anything else.

PM getting on with the job. Prime Minister Malcolm Turnbull wasted no time this morning in announcing a royal commission into youth detention in the Northern Territory, also using Facebook to alert Australians to the move. It was a sponsored post by 10am … 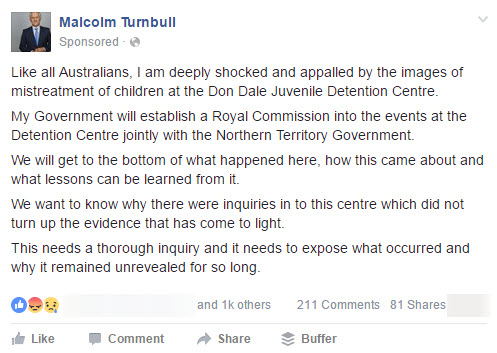 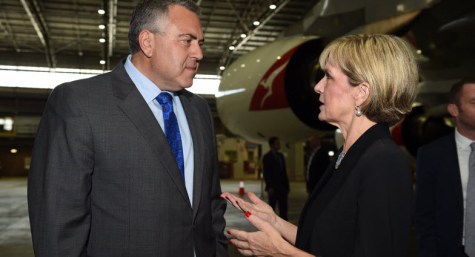 I wonder if Joe has heard that the age of entitlement is over?

Downer wasn’t foreign affairs Minister in ’93, sure you have the dates right?

Well he’ll soon find that the entitlement of age is over. Turkey/feather duster.