Car bomb terror … or not

A tale of two front pages.

On Friday, we covered how many parts of the media initial believed Thursday night’s attack on a Merrylands police station to be a terrorist attack — a suggestion hosed down by police later in the night. After police denied that the attack was terrorism, much of the coverage was updated.

A tipster has since sent us through images of two different editions of the Daily Telegraph. The one on the left is obviously an early one, while the one on the right is the one that was most widely published later in the night. The word “terror” was initially in the headline, but it was later dropped. Papers print very few copies of their earliest editions. 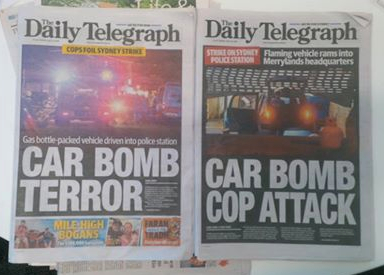