The Croats versus Tony Jones

Why has a Croatian newspaper labelled Tony Jones the "biggest enemy of the Croatian community"?

A Croatian weekly newspaper has dubbed ABC host Tony Jones as the “biggest enemy of [the] Croatian community in Australia” after he referred to Croatian terrorism in Australia in the 1970s on Q&A.

“When you say we never had terrorism in this country before, that’s simply not the case. In the 1970s there were multiple bombings by Croatian Catholic extremists. This has happened in Australia before, it is not the first time. You should at least get that straight.” 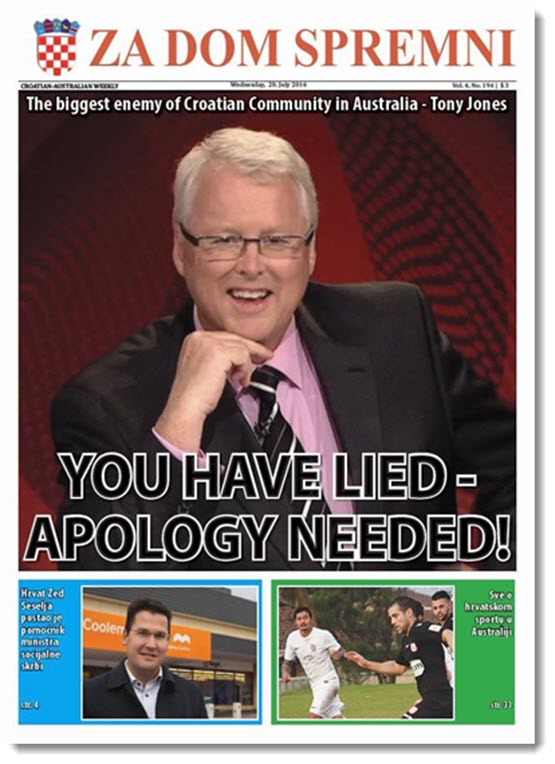 The statement has infuriated many members of Australia’s Croatian community, for whom the notion of Croatian terrorism is a highly charged and controversial issue. A petition started by former Liberal staffer Jakov Miljak calling on Jones to apologise has amassed nearly 4000 signatures. The petition states:

“Recent evidence and fresh investigations into the purported crimes of Croatian Australian citizens (namely the ‘Croatian Six’) have shown that a large portion of the evidence used against the alleged Croatian ‘terrorists’ was fabricated, false and cherry-picked as part of an operation by the communist Yugoslav intelligence agency, known as ‘UDBA’.

“Research conducted into the matter has revealed that former Yugoslav officials considered the discrediting of the Croatian Australian community as one of their ‘greatest successes’, making use of Australian Police and intelligence services to ruin the reputation of Croatian Australians as extremists.”

Croatian Australian newspaper Za Dom Spremni (the term is a patriotic slogan most famously used as the salute of the Croation Ustase nationalist movement) has joined commentators like Gerard Henderson in slamming Jones. Henderson went on the Bolt Report last week and said Jones’ comments were “totally ignorant”, as there was “no evidence” that Croats had committed terrorism, no evidence that the Croats in Australia were particularly Catholic, and there was evidence that Croats had been framed.

Within the ABC, the criticisms have been largely dismissed as a beat-up, and Jones has defended his comments. In a letter to a complainant seen by Crikey, he says there is a “large body of evidence” that Croatian nationalists dubbed extremists by the Australian government, police and security agencies were responsible for terrorist activities in Australia “over many years”:

“Those activities included very many bombings of Yugoslavian government properties or businesses linked to that government during the 1960’s and 70’s; acts of violence against individuals in Australia; money raising and planning of foreign military incursions by armed guerrillas into the  former Yugoslavia; and the active participation of Australian citizens and residents in those military incursions.

“If you are interested I could send you the relevant Senate Hansard of April 1973 when the Attorney General tabled multiple ASIO and Commonwealth Police documents relating to all of the above.”

The runaway petition makes explicit reference to the Croatian Six — a group convicted of trying to blow up Sydney’s Elizabethan Theatre in 1979. That case, which involved detective-turned-convicted murderer Roger Rogerson, resulted in the six men being jailed after an eight-month trial. But there is an increasing belief they were set up — a conclusion heavily reliant on investigative work by the ABC’s Four Corners and The Sydney Morning Herald. The case has fuelled beliefs that the history of so-called Croatian terrorism in Australia is similarly dubious. But many incidents of it, including several attacks on Yugoslav consulates in the 1970s attributed to Croatian nationalists, remain historically uncontroversial. Jones says he was not referring to the Croatian Six in his statements.

Miljak, who started the petition, told Crikey this morning he was glad Jones “recognises the injustice concerning the Croatian Six”. But he still thinks Jones should address the comments on air.

“He perpetuated the stereotype played out in the media for a long time that portrays the Croatian community negatively. I’m second generation, and generations before me fought this battle. It’s very painful to still see these stereotypes be continued, even in 2016.”

Speaking of the 1960s and 1970s, when communist Yugoslav agents battled anti-communist Croatians at home and abroad, Miljak says it was a “period of instability”.

“The evidence suggests there was a policy of Yugoslav organisations undermining and infiltrating Croatian organisations. I’ve never claimed that was the case in all instances. But we don’t have enough evidence to say [who was ultimately responsible].” The only high-profile conviction of Croatian terrorists, Miljak says, was of the Croatian six, and that was suspect.

It is understood the ABC has no plans to address the controversy on this evening’s episode, where ABC Breakfast host Virginia Trioli is filling in for Jones.

I can’t believe anyone would want to use the Ustaše slogan – Za Dom Spremni – (‘For the homeland – ready!’) who wasn’t in agreement with some very dubious perspectives. Despite Robin’s very kind description of the Ustaše as a ‘nationalist movement’ they were actually an ultra-right paramilitary terrorist organisation, Nazi collaborators, mass-murderers and advocates of genocide. That a pro-Ustaše newspaper would have a big sook about their terrorist activities being mentioned is a bit rich, though it’s not surprise that Old Goat Henderson is yet again defending far-right terrorism.

In today’s pseudo-panic about terrorism, why is it no surprise that this sort of pro-terrorist newspaper has been publishing for years without prosecution, raids, shock-jock horror and all the rest … Not ’cause they’re not Muslim?

Get Fucked
Reply to  Bob the builder

Please give me one example where Croats were convicted in Australia for terrorism? The one case we do have is the Croatian six which the ABC was more than happy to investigate 25 years ago and conclude that it was a fraudulent case. Also ZDS is not an Ustasa slogan, it pre-dates the Ustasa. But you know the Ustasa wore pants too mate, I must be a Nazi then for wearing them right now. Illogical leftist at his best.

I remember one morning in the early 60s walking to school past the Serbian club which had been shot-up by Croats overnight.
O Tempora, O Mores.

Ante Pavelic was noted on one occasion to have a large basket of Serbian eyes in his office – sent by an enthusiastic minion.
Croatian Ustase ran the Jasenovac concentration camp , known as “the Auschwitz of the Balkans ” in which Serbs, Jews, Communists and Gypsies were exterminated ( estimates vary between 20,000 and over 1 Million ).

One particularly delightful individual , a Franciscan priest and Utase member , Peter Brzica, managed the feat of cutting about 1300 throats in a single night in 1942.

A lot of them got away after the war, many being hidden by the Catholic Church.

The credibility of any newspaper using the slogan of this organisation as its masthead has to be seen as questionable.

Personally I don’t think anyone is in the position to point fingers and judgment over something that happened 74 years ago. Epecially when it comes to war because no one wins in war. What about when British colonialists attempted ethnic cleansing of the Native Aboriginal people? What did Australia do? They apologied, they admitted their wrong doings, now thats all the Croatian Australians want a formal on-air apology for the incorrect information portrayed on the tv program. These 6 mens lives have been significant altered to the point of distruction. With this apology we hope to find justice for these six men.
What happened in those slaughters was horrible. And these Croatian 6 were framed, these are two seperate issues we are talking about. Now, to condemn a news paper for speaking out about the incorrect portrayal of these men, just because of their name, (a name that was changed to show support to a Croatian athleate being bullied in the football/ soccer world) well now I would say thats being, ummm whats the world? RASIST!

Now with your comment I can see that the Yugoslav communist secret police succeed in attempting to discredit Australian Croatians.