Greens take silver in Warringah. Former prime minister Tony Abbott was safely returned to his seat in Parliament by the people of Warringah, despite an onslaught from nine other candidates, many of which were trying to make a statement of their discontent with his policies while in the top job. While Abbott got over the line without preferences, a tipster tells us that, when it comes to distributing preferences, the result is surprising:

“AEC has advised that after final distribution of preferences, the TCP (two candidate preferred) result will change from Liberal first, Labor second. Result will be reset to Liberal first, Greens second.”

The AEC website still lists the two-candidate preferred as between Abbott and Labor’s Andrew Woodward, but when it comes to first preference votes, Woodward was only 2000 ahead of the Greens candidate Clara Williams-Roldan. The high number of independents and minor parties could play a role in deciding who really came in second. Of course, this doesn’t change the final result, and we doubt Warringah will ever be included as one of the Greens’ seats to target and pour money into, it’s good to note this might be the most successful the Greens will probably ever be in the Northern Beaches.

Twiggy and Trump on the trail? As the Republican National Convention wraps up, there’s a rumour going around out west (Australia, not California) that a prominent businessman could be joining the Trump camp. A caller to 6PR in Perth flagged the idea that Andrew “Twiggy” Forrest, mining magnate, was about to get a gig as a senior adviser to the one and only Donald Trump. Business has picked up for Twiggy lately, with Fortescue Metals exceeding its production forecasts for iron ore last financial year, after he had previously called for a cap in iron ore production when prices were down. Forrest is not new to the political scene, but working for Donald Trump …? We watch on with interest.

Finding Andrew Bolt’s book. News Corp columnist Andrew Bolt says sales for his latest book Worth Fighting For are going well, despite what he calls a sabotage by bookstores, which have put the title in the politics section, instead of the prime real estate at the front of the store. Ms Tips’ colleague Josh Taylor saw the book in a newsagent in Rozelle, right above the daily newspapers, but was told by Mark Fletcher, CEO of NewsXpress, that newsagents don’t get any choice about stocking the books, as they are sent to them from newspaper publishers along with the newspapers … 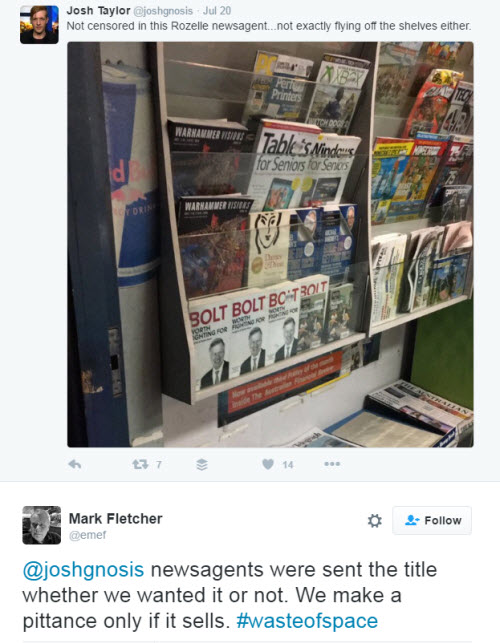 Bolt’s book is also not available on industry website Books In Print, where bookshops order titles from. It means that if booksellers want to stock the book, they have to make arrangements with the publisher directly. But an insider tells us generally it’s the publisher going straight to the bookstores.

Bush-league NBN. Barnaby Joyce is back in Canberra (with just one emergency trip to Brisbane to calm the Liberal-National Party folk up there) after seeing off the challenge in New England by former independent MP Tony Windsor. One of Windsor’s major campaign points was the NBN and internet access to those in the bush. BuzzFeed even asked locals to attempt to download a video to demonstrate just how unreliable connections in the area are. A tipster tells us that they live in the electorate and, right before the election, saw some NBN developments, which have now stalled:

“We were surprised and happy when ours and nearby neighbours orders to install the NBN Sky Muster satellite dish and modem came through a few days before the July 2 election … all being in the New England electorate we thought OK a lucky break could be influenced by Barnyard Joyce’s need to be re-elected. The installer said it would take 48 hrs to establish connection … well that was 3 weeks ago and its still not working we’ve all been without internet since then. Calls to our ISP have been numerous but it appears their hands are tied by having to refer to NBN who will not give out any information as to whats gone wrong or when it may be resolved … quite frustrating as lack of internet is affecting our business … we can only use our smart phone data connection … question is … is the NBN Sky Muster a turkey or were we jumped in the queue for political reasons when the NBN weren’t ready for us?”

Delays with the NBN — especially between NBN Co and retail service providers — are not unusual. But the timing is convenient.

Never getting back together. You would have to be living under a rock or purposefully avoiding the story to be unaware that a major celebrity feud has erupted between singer Taylor Swift, on one side, and rapper Kanye West and his wife Kim Kardashian on the other. Earlier this year West released Famous, a song in which he raps “I feel like me and Taylor might still have sex/Why? I made that bitch famous”, lyrics that Swift took issue with. This week, Kardashian released footage on social media app Snapchat, showing Kanye West rapping the first half of that line to Swift on the phone, and Swift saying “I mean it’s like a compliment kind of”. Later Swift released a statement saying that she had not approved the line in which she was referred to as “that bitch”.

This is all obviously very important. So important, in fact, that WikiLeaks has got in on Taylor Swift’s side, tweeting “Taylor Swift is right. Full source tape or it didn’t happen. #scientificjournalism”. Any way to stay relevant, right?

Blot, Barnyard & the Bling Brigade.
Have we reached Peak Stoopid yet?