‘Terrorist attack’? A timeline of the Merrylands media melee

The terrorist attack that maybe wasn't: Myriam Robin and Josh Taylor on how Sydney media went crazy for four hours over an incident in Merrylands.

Last night, “about” 7:00pm. A car filled with gas cylinders was set alight and rammed into the security doors at Merrylands Police Station in Sydney’s west.

7.45pm. According to Isentia, the first broadcast mention of the word “terror” in relation to the attack was on 2GB. Nine News’ Simon Bouda told Ross Greenwood on The Money Show:

7.54pm. 2GB’s The Money Show makes another mention of the story, this time using the words “alleged terror attack”.

“About” 8pm. The man is arrested by NSW Police.

“Police sources have told the ABC there has been an attempted terror attack directed against a western Sydney police station.”

This tweet is quoted and referred to in much of the subsequent coverage. 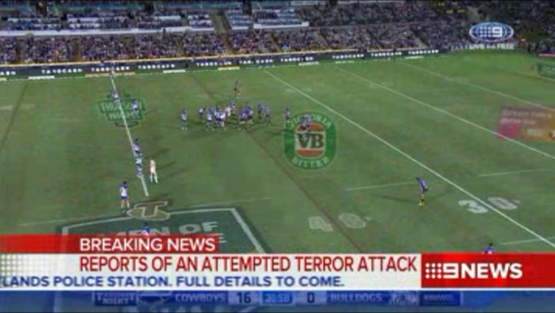 8.30pm. The Daily Mail‘s story is less circumspect than most:

“A man has driven a burning car filled with gas cylinders into a Sydney police station carpark on Thursday night in an attempted terror attack.”

“The circumstances regarding the incident are in the early stages of being confirmed and no further details are available at this time.”

“The suspicion, the fear is, obviously, that this was a terrorist attack on the police station in Merrylands. And of course, following recent scenes around the world … you can understand why fears are so heightened here in Sydney as well.”

“I wonder how quickly some idiot is going to inanely say this has nothing to do with Islam or talk about a religion of peace or blame those who oppose radical Islam or even Australia as a whole for marginalising some “disaffected youth”.

“How about for once we talk about the problem at hand: the ideology of radical Islamism and its adherents and what we, as a nation, are going to do about it.”

9:30pm. Christensen issues an update to revise his original statement, but says it was all the ABC’s fault:

“New reports in state that surprisingly for Merrylands, this incident may not have been a terrorist attack as the ABC originally reported it to be. News is still rolling in, so we will see. But the point I make in this post is not lost: why is it every time there is a terror attack (here or overseas) we get the same platitudes from the Left and the political & media elite. I say again: we need to discuss the rise of radical Islam within Australia and the threat it poses to national security. More so, we need to work out what we do about it.”

“Initial inquiries suggest there are no links to any specific groups and the man’s motive remains unknown at this time.”

It’s accompanied by a press conference at which assistant commissioner Denis Clifford tells the media:

“There’s nothing to indicate this is in any way related to terrorism. We’ll keep an open mind but we’re not leaning that way.”

Today, 7:30am. Christensen says it is outrageous that he is blamed for the vilification of Muslims in his electorate. Last night The Guardian, followed by The Sydney Morning Herald first thing this morning, reported on how Christensen got it wrong.

Plastic sword the least of ASIO’s bungles in ‘terror raid’

We spend so much on terror for so little result that every possibly violent event must be used as justification. Even refugees from the Family Court can be turned into terrorists – particularly if they make their last stand in front of a TV station.

George asks ‘I wonder how quickly some idiot is going to inanely say this has nothing to do with Islam?’ Followed by:
‘New reports in state that surprisingly for Merrylands, this incident may not have been a terrorist attack as the ABC originally reported’
I think I can answer George’s question. Pretty quickly, it was you George you idiot.

“not believed to be a terrorist event” ie “not believed to have been conducted by anyone who meets at least one of the following criteria: has a beard or wears a ‘burqa’, has a funny name, might have once walked into a mosque, or has read a pamphlet on Islam”.

8.55pm. On Sky News, David Speers says: “The suspicion, the fear is, obviously, that this was a terrorist attack on the police station in Merrylands. . . ”

“The FEAR is..” Some nutter trying to blow up a police station isn’t scary. No problem, nothing to see here, move along. However, if the nutter is a MUZLUM!!!! AAAArrrrhhhhhh….. RUN FOR YOUR LIFE, NOW I’M SCARED !!!!!!!!!

A day in the life?
“I read the news today, oh boy,
About a xenophobe who’d made the grade;
And though the news was rather sad
Well I just had to laugh …….
I saw the photograph…..

He spewed his mind out on a car.
He didn’t notice ’til the lights had changed.
A crowd of people stood and stared
They’d heard these thoughts before.
Nobody was really sure
He wasn’t from the Born to Bore……….”
Apologies to Lennon.