KickAss is dead -- the case continues ... The Oz hunts another Q&Aer ... British media and Brexit allegiances ...

KickAss is dead. The case continues. The Australian music industry has said it will proceed with a case to block KickAss Torrents, despite the website being taken down yesterday and the site’s founder arrested. The alleged founder of the world’s largest piracy torrent website, Artem Vaulin a native of Ukraine, was arrested in Poland on Wednesday and charged with conspiracy to commit criminal copyright infringement, conspiracy to commit money laundering, and criminal copyright infringement. The United States Department of Justice Criminal Division’s Assistant Attorney-General Leslie Caldwell said in a statement that authorities would seek Vaulin’s extradition to the US to face the charges.

Caldwell claimed the file-sharing site, hosting TV shows, films, software and music, distributed over $1 billion in copyright material, with 50 million unique visitors worldwide per month and ranking as the 69th most-visited website in the world. Seven domain names and a bank account have been seized as part of the case, and at the time of writing, KickAss remains offline.

The site and its many mirror versions is already blocked in the United Kingdom, Ireland, Italy, Denmark, Belgium and Malaysia, but in Australia the music industry had begun legal action to have the website blocked by local internet service providers. The case had been delayed pending a decision in a similar case brought on by Foxtel and the film studio companies for other piracy websites, but a case management hearing had coincidentally been set for today to decide the future of the case.

The Foxtel decision hasn’t been handed down yet, and despite KickAss’s offline status, Crikey has confirmed the case will still be proceeding. Potentially to avoid a Hydra situation where new versions of KickAss reappear down the track. In the Foxtel case, that is a key issue of concern. Rights holders want an effective block on a website, meaning multiple versions of the sites will need to be blocked over time but internet providers will end up incurring a lot of costs to constantly update and block new locations of the same website. — Josh Taylor

The Oz hunts another Q&Aer. A man who asked Pauline Hanson a question on Q&A on Monday has again become the subject of an investigation by News Corp. Today’s Australian delves into the online activities of Khaled Elomar, who told Hanson on Monday night that her rhetoric had led to him feeling personally unsafe. 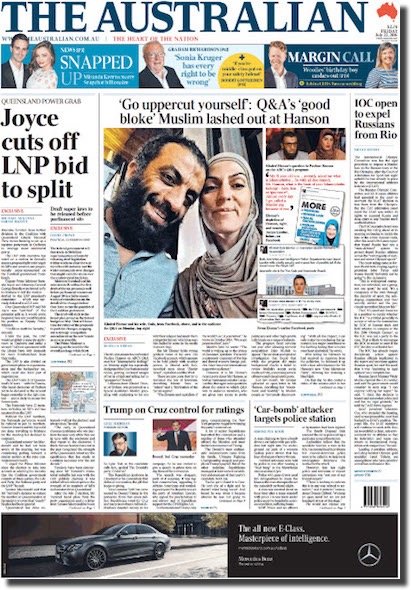 In a statement, the ABC told The Australian audience members were checked as much as practicable by producers on social media, and the audience list had been referred to the AFP and NSW Police. — Myriam Robin

British media and Brexit allegiances. It was a good Brexit for the Daily Mail Group. The flagship Daily Mail not only backed the Leave vote on June 23 to the full extent of its Toryness, it ditched Leave leader, Michael Gove, husband of columnist Sara Vine, and endorsed Theresa May for leader of the Conservative Party and Prime Minister, even though she was a low-key remainer.

It was another timely reminder that hypocrisy is essential for a media business that wants to remain on top of its opposition day after day, with readers and with those it seeks to influence. And so it was for the paper’s long-time editor Paul Dacre. The vote and the Mail’s part in it vindicated his Euroscepticism, even if he was exposed as a hypocrite during the campaign for receiving tens of thousands of pounds of EU subsidies for his hobby farm in the heart of verdant rural England.

But that was a story to be ignored and the likes of Mr Dacre has never let a story like that divert him from his true purpose, protecting Britain from the dastardly folk in Brussels and keeping the Mail ahead of all those pesky rivals (aka The Sun and Daily Express and Telegraph) nipping at his heels every morning. — Glenn Dyer

Front page of the day. Ted Cruz refused to back Donald Trump yesterday. Things got ugly … 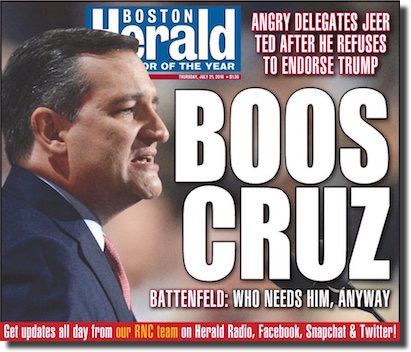