How The Australian got it hopelessly wrong on wind energy

The Australian got its facts wrong on wind energy in South Australia. Investments in wind have brought costs down.

The Murdoch media attack on the Australia wind industry knows no bounds, and not many facts either.

This week’s front-page “exclusive” in The Australian suggests South Australia’s wind turbines were producing significant amounts of “negative power” from the grid at the height of the recent electricity “crisis”. But the numbers it quotes are ridiculously wrong.

The story, by Adelaide bureau chief Michael Owen, suggests the state’s wind turbines were “producing about 5780MW” between 6am and 7am, but by mid afternoon were producing “negative 50MW”. As analysis from Ron Brakels observes, the report confuses energy terminology, apparently not knowing the difference between capacity and output.

In fact, the state’s wind turbines cannot produce 5780MW — they only have a combined capacity of 1600MW. There’s not even 5780MW of wind capacity in the whole country.

Let’s presume what Owen meant was MWh (megawatt hours) — the total being produced over a set period of time. But even here he has got the numbers wrong. Between 6am and 7am, according to data provided by the Melbourne Energy Institute, and sourced from the Australian Energy Market Operator, the output totalled around 178MWh.

And the negative output? 50MW? Again, according to AEMO data, the biggest negative point (five minute interval) was 1.8MW, at 2.20pm. The total, between 2pm and 3pm, was a negative 0.09MWh. There were no negative output points at 1pm, as Owen claims. 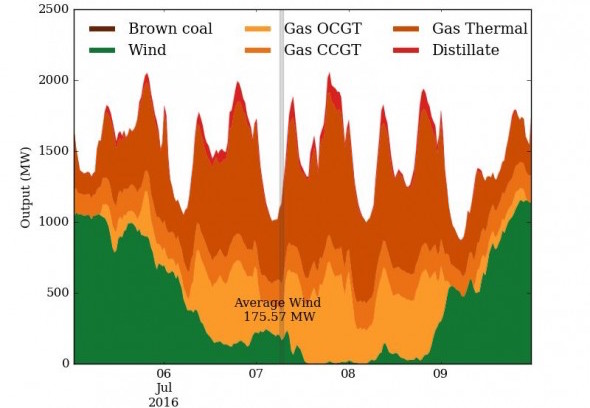 Now, the critics will no doubt say that, gosh, wind wasn’t able to produce much in that period, so it must be useless. But in that week, a lot of coal-fired power wasn’t available either, with 3200MW of units shut down at Stanwell, Liddell, Yallourn, Eraring, Gladstone, Hazelwood and even Loy Yang A — apparently due to coal quality issues.

(Boy, have there been some problems in coal supply recently. The AER, in a previous report on electricity prices, noted how Loy Yang B had suddenly withdrawn 480MW of capacity — a whole unit — because of “supply” issues. The mine is right outside the front door. The withdrawal helped push up prices by around 50%).

Clearly, The Australian is not trying hard enough to get a broader perspective, or acknowledge the role of gas prices, problems with transmission wire infrastructure and other factors.

Economist Judith Sloan, a contributor to The Australian, took another swipe this week. Sloan was upset about the price spikes that went up to about $1000/MWh during the period:

“How could this happen? How could it go so wrong for South Australia?

“South Australia is paying a heavy price for its misguided energy policy, potentially leading to the further deindustrialisation of the state while also reducing its citizens’ living standards. But the real tragedy is that this outcome was entirely foreseeable.”

Well, no. South Australia used to have these sorts of price spikes as a matter of course, before wind and solar even turned up, because of the reliance on expensive gas and the supply constraints of being at the end of the grid.

As SA Energy Minister Tom Koutsantonis told the ABC, that’s precisely why the government encouraged investments in wind and solar: to bring costs down. That has largely succeeded.

“Boy, have there been some problems in coal supply recently.”

Odd that the mine cannot mix in some better coal to maintain the usability. I wonder who gained by shutting down those generators.

How could this happen? How could it go so wrong for The Australian?

The Australian is paying a heavy price for its misguided ideology, potentially leading to the further decline in reputation while also reducing its circulation. But the real tragedy is that this outcome was entirely foreseeable.

But how many people will have taken the original story at face value, and not seen, or not bothered with, the correction?

If only the Editor and the Journo had done NSW Year 11 Preliminary General Maths at school; there’s a specific topic just for this sort of stuff.

I haven’t read the Oz for years and nothing will change that habit even if it was free of charge. This just just amplifies why.

How can any decent journalist write such ignorant crap and worse the paper use such a stupid headline? ( I’d rather read Crikey and Renew everyday!)

Just one aspect of the Limited News, Ministry of Misinformation & Obfuscation, narrative – Code of Conduct (specifically re “Accuracy”) and all – serving one party rather than the country.