It’s a fine line between Pyne and Payne. One of the more surprising moves in Monday’s ministry announcement was that Christopher Pyne would be giving up his title as Science, Industry and Innovation Minister to move into the newly created title of Defence Industries Minister (or Minister for South Australia) under Marise Payne, who kept her job as Defence Minister. The move is being regarded wearily by those in Defence, who are waiting to see how much autonomy Payne allows Pyne to actually work with. Insiders are not sure how the new arrangement will actually function, organisationally and hierarchically, with previous junior ministers in the portfolio always having their decisions routed through the Defence minister’s office. The last minister to allow their offsider to make decisions was Stephen Smith, a source says. There is fear about relying on South Australian manufacturing, the source says, when overseas markets have the expertise and experience to build the infrastructure Defence needs, with the savings it also needs. Will Pyne be able to keep his self-appointed title as “a Fixer”? We’ll have to wait and see.

How much did Hanson get out of Sunrise? In the wake of One Nation’s return, many have pondered how much Pauline Hanson’s 20 or so appearances on Channel Seven’s Sunrise program helped boost her profile. Another aspect of this is that Sunrise paid Hanson — as it does around a dozen regular commentators of varying political views it has come on the show. So, how much was she paid? Ms Tips asked around, and understands these kinds of appearances will net a guest between $250 to $500 a pop. Along with, usually, Cabcharge vouchers to get the guest there and back. Hanson would have netted at least $5000 from Channel Seven over the first half of the year. The program’s EP Michael Pell has previously said she wasn’t paid for appearances where she was a speaking as a political candidate.

Maurice Blackburn vindicated. Has leftie law firm Maurice Blackburn taken two long to pay out compensation to victims of the Black Saturday bush fires after running two successful class actions on their behalf, all the while lining its own pockets? That’s certainly the angle The Australian been pushing of late, driven by the frustrations of some of the firm’s clients.

On Monday, the Oz’s Hedley Thomas quoted a leaked July 7 update to clients that dismissed many of the concerns around the delays. The Oz quoted senior partner Josh Bornstein saying the firm had been subjected to a “smear campaign” by The Australian.

A tipster reckons Bornstein has a point. The very last line of Thomas’ piece quotes a Friday ruling by the Victorian Supreme Court, which said there had been an “impressive quickening in the pace of processing”. But if you go to the judgment, judge Jack Forrest had a lot more to say on the issue. In fact, the whole judgment focused on whether Maurice Blackburn had taken too long to pay out, following complaints by survivors of the fires. In his ruling, Forrest extensively addressed the issue of the delays, but largely found nothing amiss, saying the delay wasn’t unusual compared to other class action schemes, and was necessary in order to achieve an “equitable and cost efficient distribution” among the litigants.

Forrest said the fact that there could be a distribution of payouts by the first quarter of 2017 was “commendable”, and while he suggested other ways the payment distribution could have been sped up, concluded they had not been viable options.

“What is important is endeavouring to minimise the delay, but at the same time ensuring that the assessment process is carried out fairly. For my part, I am satisfied that has occurred here.”

To date, this hasn’t been reported in the Oz.

Rudd the dud, Clark the crowd-pleaser. We have reported quite a bit on Kevin Rudd’s bid for the United Nations Secretary General, and the reaction within the federal Liberal party, which will need to make the decision on whether to nominate the former PM. While former Liberal leader Brendan Nelson has come out in support of Kevin Rudd, Liberal Senator Cory Bernardi couldn’t be more certain in his belief that Rudd shouldn’t be allowed anywhere near the job, and that the Australian government shouldn’t help him get there. One idea that has been canvassed is that the government could nominate Rudd, but not go so far as to actually help him in the application process. The contrast with our neighbours across the ditch in New Zealand is stark. New Zealand also has a former prime minister eyeing off the role of Secretary General: Helen Clark. Clark, from the New Zealand Labour Party, has been roundly endorsed by the New Zealand government, even to the point where the Ministry of Foreign Affairs and Trade is tweeting about what a top job she will do, she even has her own hashtags: 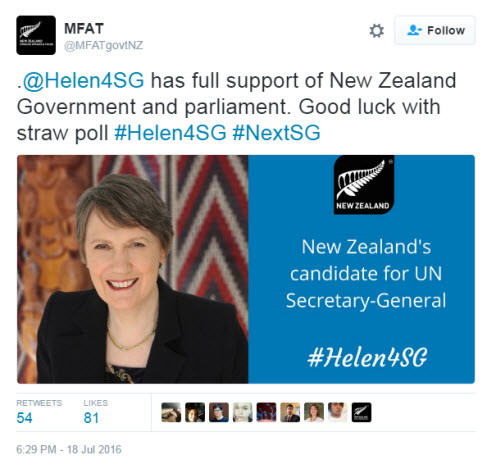 Could Kevin Rudd get the same support from DFAT? We struggle to see it happening.

Kiwi Prime Minister John Key has said that Rudd’s inclusion in the race is unlikely to affect Clark’s campaign, telling media in Jakarta that he understands the difficult political situation in Australia:

“If a country has a former prime minister that goes to the government and asks the government to support them for a particular position, then that’s a very difficult thing for the particular government in question, or it can be a difficult position because in the end, most people want to see their own nationals do well.”

MWF stumbles at first hurdle. The Melbourne Writers Festival program has been public for less than 24 hours and the organisers have already been forced to change the name of one of the events, which drew the ire of the sex worker community. The program, released last night, originally included an event titled “The Sex Trade: Murder and Survival“, featuring Melinda Tankard Reist, Ruth Wykes and Meagan Tyler, all authors who have campaigned against porn or sex work at some point. The event description says it will “explore the devastating impact of prostitution on the lives of sex workers” and the name has now been changed to “Invisible Women”. Both the title of the event, the speakers featured and the failure to include on the panel any sex workers — and there are sex workers in the writing community — has angered many.

It’s a quick change that could easily have been avoided before the program was released. Of course the change in name doesn’t really smooth things over — a panel called Invisible Women doesn’t include any of the women that it speaks about.

Fair shares: Nelson gets the EU, Beazley gets US

Tips and rumours: Rudd and Clark, best of frenemies

Who or what is the SWERF message?