Zombie diggers, now with added chat bots. News Corp’s Anzac Live is back. Though truly, it never went away. On July 16, the company launched a chat bot using the voice of Archie Barwick, a farmer-turned-soldier who served first at Gallipoli, then in France and Belgium. It runs on his Facebook page — which was first launched last year as part of the company’s initial Anzac Live initiative, which was tied to the 100th anniversary of the Gallipoli landings.

News Corp has used Facebook’s just-launched chat bot functionality to allow users to ask Barwick’s page questions, which are answered using snippets from Barwick’s own diaries. The bot has been created by News Corp and software company Wizeline, using Wit.ai language technology. As the page states in an update:

“As an Anzac Live special, we are proud to present the Archie Barwick Facebook Messenger chatbot. Get incredibly detailed updates from Archie 24/7, ask questions and see how the bot answers. Use Messenger on your phone (or desktop) to be with Archie every moment of his time at Pozieres. Find him on Messenger or go to his Facebook page and message from there.”

“… extensive journals cover everything from his thoughts on the fear and impending battle (‘This may be the last entry I write’) and the enemy ‘I reckon you are justified in shooting the dogs on sight’) to less warlike matters like food, booze, sport and of course his beloved home.”

Also making a return this year are several of the Facebook accounts first introduced as part of Anzac Live, including Alice Ross-King, Bert Reynolds, Arthur James Adams and John Monash. Australian media outlets, particularly News Corp, have a long history of capitalising on WWI history. As historian Jo Hawkins noted in Crikey last year when considering the previous incarnation of Anzac Live (in which Barwick’s was one of the voices featured), primary sources like diaries need to be read in context. Diaries of WWI released for public consumption during or after WWI, for example, tended to be exceedingly patriotic. — Myriam Robin

The conditions explicitly forbid others of making gifs (moving short digital videos) of key moments, though Sky says this is the Olympic Committee’s stipulation. Other media outlets are also not allowed to show any clips until 40 minutes after the event (negotiated down from a proposed three-hour delay). And a ban on criticising Sky’s broadcast in any way was floated, but then withdrawn after protest from the country’s two major print media outlets. Kiwi sports website The Spinoff reports:

“The conditions have led to a heated behind-the-scenes media fight which could affect how much Games coverage you can watch on your mobile or computer. Most troublingly, some of the disputed points are contained in the News Access Rules – if journalists don’t sign up they cannot be accredited as media for the games. Meaning that Sky is attempting to use its position as rights holder to circumvent New Zealand copyright law and deny other organisations’ journalists access to the games if they don’t agree to its demands.

“The fight reaches a critical deadline today, and if there is no progress from Sky, there has been talk within both of the NZME and Fairfax of retaliating by sending vastly scaled back teams to the games, and it remains a very real possibility that one or both organisations might respond in this way.”

So, disagree with Sky, and you don’t get to report on the Games at all. Indeed, Fairfax NZ sports writer Mark Geenty tweeted this morning:

Devine misapprehension: Safe Schools attack. When Daily Telegraph columnist Miranda Devine writes about LGBTI issues, it’s fair to say she’ll get something wrong. Yesterday, splashed across the front page as a “PC madness exclusive”, Devine claimed the term “girl” had been banned at Cheltenham Girls High as part of a proposed implementation of the Safe Schools program.

Safe Schools, contrary to Devine’s claims, does not specifically ban gender titles but promotes acceptance for transgender people and those who don’t identify as male or female. The school has categorically rejected Devine’s claims that “girls” is banned. The school told SameSame that it will not change the way students’ gender is referred to.

Today, Devine avoided correcting the record, but stated the school shouldn’t be implementing the Safe Schools program without parental permission. She also claims that “mum and dad” is banned and that boys are being directed to dress up as girls as part of free play in a guide developed by the NSW Teachers Federation. A quick review of the guide (released in 2011) — available online but not linked in Devine’s piece — reveals a misreading of the guide. This is what it actually states:

Far from “mum and dad” being banned, the guide promotes teaching the diversity of family units and welcoming same-sex parents into classroom activities. Devine is earning a reputation for misreporting LGBTI issues. — Josh Taylor

Top Twitter troll falls in abuse crackdown. Twitter took action yesterday and banned gay alt-right conservative and self-described “most fabulous supervillain on the internet” Milo Yiannopoulos (@nero) from its platform following a torrent of abuse from his followers and others towards Ghostbusters star Leslie Jones.

Yiannopoulos had previously lost his verification badge (the coveted blue tick) on Twitter because of his behaviour on the site, but the permanent ban was brought on by Twitter because the site said Yiannopoulos’ abuse was in violation of the company’s terms and conditions.

Twitter has faced criticism for its inaction in dealing with abuse, and its inconsistency acting on claims of abuse and harassment from everyone — not just on the abuse directed at high-profile people. Twitter has admitted in the past that the company has been bad at dealing with trolls, but the ban on Yiannopoulos could signal it’s getting serious about it. The decision this week to begin to offer verified accounts to people who apply could suggest Twitter is considering de-anonymising the service as the best way to cut down on abuse.

The ban on Nero so far has only strengthened his legions of fans, who have started a “free Milo” movement to attempt to get him reinstated on Twitter. Milo himself, playing the best martyr role he can, told his website Breitbart.com that the action proved that Twitter was “a safe space for Muslim terrorists and Black Lives Matter extremists, but a no-go zone for conservatives”. — Josh Taylor 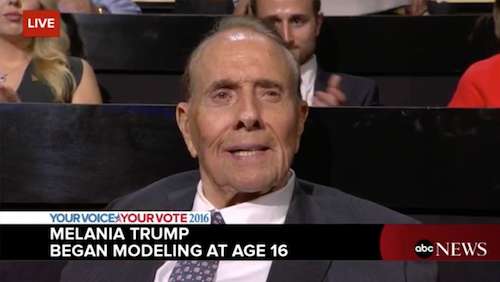 Video of the day. When the speakers shut up, the music cranks up at the Republican National Convention in Cleveland — and all those wobbly white Americans just can’t help themselves. This C-SPAN cut cheered us at up Crikey HQ today … 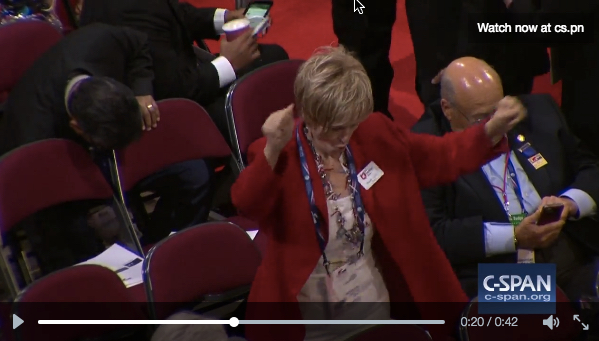 Some of those people are human! Kinda sorta.