Trumpiness in the eye of the beholder

Truth just isn't that important to Donald Trump. Or, he insists, to anyone else. 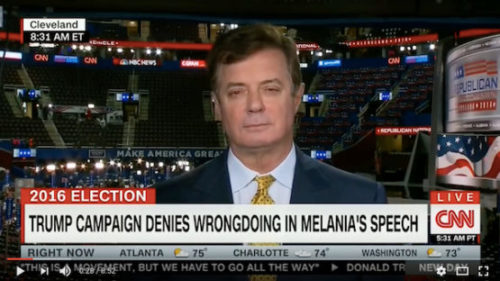 “… a big part of the case I’m hearing here at the convention for why Donald Trump needs to be president is that Hillary Clinton can’t be trusted. That she doesn’t level with the American people, which is another way of saying she lies. That is what this is going on right now with this issue that should be small about this speech. You don’t like that you got caught with some of Michelle Obama’s language in the speech …

“You don’t want to acknowledge it because that’s the way this campaign works. Which leads into the second problem, which is that when faced with something that you did wrong, you just deny it, no matter if it’s true or not. Whether it is the man who has a developmental disability who works for The New York Times, and Donald Trump mocks him and then says, ‘no, I didn’t’. Whether it is a star that represents the star of David, and you say, ‘no, it is a sheriff’s star’. There is a pattern, whether it is Baron, John Miller, that was really Donald Trump. There is a pattern of denying the obvious. What happens when you’re running the government of the United States and you don’t want to deal with what happens then? That’s the concern. That’s why I don’t understand you just won’t own this little thing and move on.”

As Guy Rundle wrote from Cleveland yesterday, Donald Trump could have killed the plagiarism scandal with an immediate mea culpa. But truth is beyond Trump and this campaign. Trump’s is a dystopian, post-truth world.

(Fake) blowhard conservative Stephen Colbert coined the phrase “truthiness” — it’s like the truth, but something else. The character returned to screens this week to introduce a new word to the political lexicon: “Trumpiness”. Where the truth is barely perceptible — or even relevant.

“Where the truth is barely perceptible — or even relevant.”
If professional politicians cannot be trusted at all, we will elect anyone available that says what we think.

The fact that Trump has been accused of cheating at golf says it all. Samuel L Jackson made the accusation (backed up by a witness) after they’d played a round of golf. In his defence Trump replied that he didn’t know Jackson nor had they ever met….

Well, y’know, who are the American People going to believe – an eye witness or Donald Trump?

It is the surreal nature of the fact that the Drumpf is the nominee of a trooly, dooly yooog political Party which keeps suggesting to me that I am having a bad dream.

“The Less Than True Man Show” – there’s no second takes.