Some New Zealand press reporters won't be going to Rio over an Olympics access fight.

Kiwi subscription provider Sky New Zealand is the country’s official Olympics broadcaster, and it’s trying to impose some pretty spectacular conditions on other Kiwi media outlets who want to report on the Rio games.

The conditions explicitly forbid others of making gifs (moving short digital videos) of key moments, though Sky says this is the Olympic Committee’s stipulation. Other media outlets are also not allowed to show any clips until 40 minutes after the event (negotiated down from a proposed three-hour delay). And a ban on criticising Sky’s broadcast in any way was floated, but then withdrawn after protest from the country’s two major print media outlets.

“The conditions have led to a heated behind-the-scenes media fight which could affect how much Games coverage you can watch on your mobile or computer. Most troublingly, some of the disputed points are contained in the News Access Rules – if journalists don’t sign up they cannot be accredited as media for the games. Meaning that Sky is attempting to use its position as rights holder to circumvent New Zealand copyright law and deny other organisations’ journalists access to the games if they don’t agree to its demands.

“The fight reaches a critical deadline today, and if there is no progress from Sky, there has been talk within both of the NZME and Fairfax of retaliating by sending vastly scaled back teams to the games, and it remains a very real possibility that one or both organisations might respond in this way.”

So, disagree with Sky, and you don’t get to report on the Games at all. Indeed, Fairfax NZ sports writer Mark Geenty tweeted this morning: 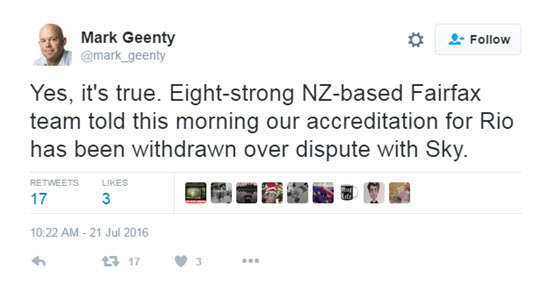