No uptown funk for K-Rudd. Former Prime Minister Kevin Rudd made it official this week and asked the Australian government for its nomination for the role of United Nations Secretary General. While its been reported that this has caused ructions on both sides of politics, we hear that Rudd himself is continuing his moves towards the UN’s top job. While there is debate on how well placed he is in the field of applicants, a tipster tells us he is well-placed in the real estate sense.

Rudd and his wife, Therese Rein, are reportedly renting a townhouse in Manhattan right around the corner from the United Nations headquarters, with some serious celebrity credentials. The house was once owned by actress Katharine Hepburn, is part of a “celebrity enclave” according to its listing agents and has access to the Turtle Bay Gardens, a fancy private park. A spokesperson for Rudd says that he hasn’t moved recently, and has been in his home in New York since the start of 2015, which is near the Asia Society Policy Institute (ASPI) where he is president. ASPI is on Park Street, further uptown than the UN — but isn’t everything close in NYC?

Uppence has cometh for piracy litigants. It’s fair to say now that, for the average person, the name “Dallas Buyers Club” is now associated with — at last count — some 300 anti-piracy lawsuits launched around the world, including in Australia. We have extensively covered how the film’s distributor, Voltage Pictures, failed spectacularly in Australia in attempting to find out the details of alleged pirates of the film in order to send threatening letters demanding payment, or else.

Now the company is in hot water of its own. According to court documents published on Fight Copyright Trolls, the producer of the film is now taking Voltage to court claiming that the company owes them $720,000 in overseas sales it has yet to pass on. In addition, the company was also supposed to hand over revenue gained from taking action against people pirating the film overseas. The film’s producer also claims, in the court document, that Dallas Buyers Club had no input into any of the court action Voltage took around the world, and the only time the producer ever heard about it was through “mostly negative media reports”.

“DBC has not received any funds, reports, updates, or any information from Voltage on the status numerous lawsuits filed around the world in the name of DBC.”

Get the popcorn out for this one.

Snakes on a train. NSW Police have confiscated a man’s snake — alas, not a euphemism — after he began exposing it to fellow passengers on the Woy Woy train line overnight. The 20-year-old man was apparently keeping an unlicensed three-feet-long jungle python named “Bread” in his backpack. Jungle pythons aren’t venomous, but they do have rather nasty teeth. Passengers concerned for Bread’s welfare gave police a call, leading to police meeting the snake’s owner at Woy Woy Railway station at 1am.

The NSW Office of Environment and Heritage recommends snakes be transported in clearly labelled, insulated containers that protect them from injuries such as crushing or scratching. 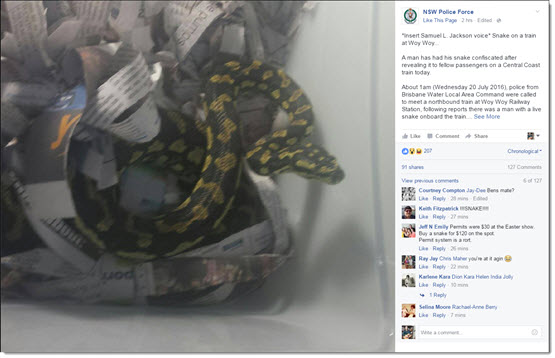 Fashion police. There has been many a joke made about the fashion sense of journalists. According to the filmmakers of Spotlight, reporters are notoriously badly dressed and unfashionable, and news outlet The Slot is reporting that the Republican National Convention is cracking down on slovenly newsmen and women. An email was sent to members of the House Periodical Press Gallery from the press gallery’s director Rob Zatkowski saying:

“All correspondents wearing a convention press pass must be engaged in the gathering and reporting of news, dress in professional attire, and adhere to journalist standards of integrity and conduct at all times. Any correspondent that does not adhere to these rules will have media credentials confiscated.”

When Gawker followed up with Zatkowski, he said the major issue was jeans and sneakers, which apart from being unprofessional, really is a crime against fashion.