The unrepresented refugee v News Corp: no surprises who won

Aladdin Sisalem failed on every count in Victoria's Civil and Administrative Affairs Tribunal.

In what The Age dubbed a David-and-Goliath legal battle between an unrepresented refugee and the might of the Herald & Weekly Times, no lucky shot aided Aladdin Sisalem.

He has failed on every count in his argument that the publisher of the Herald Sun had breached the Victorian Racial and Religious Tolerance Act in a November article that quoted a number of federal politicians saying Islam was incompatible with Australian democratic values. 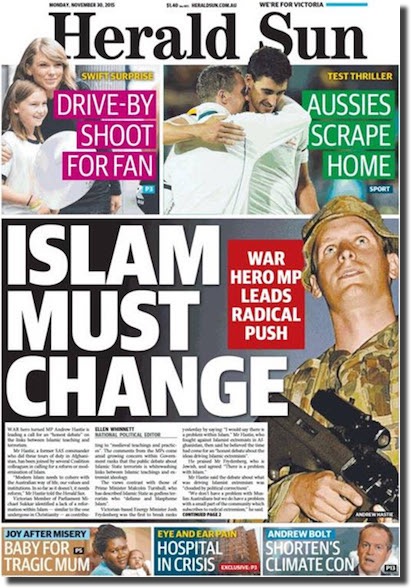 In a complaint brought to the Victorian Civil and Administrative Tribunal’s Human Rights division in March, Sisalem argued the article clearly breached the provisions of the act relating to the incitement of hatred towards religious people. But in a judgment released yesterday, VCAT member Julie Grainger said Sisalem:

“… did not provide VCAT with any evidence other than his own opinion to show that the publication of the article by the HWT was likely to incite hatred against Muslims because of their religious beliefs, in the minds of ordinary readers of the Herald Sun.”

Another aspect of the claim, which accused the Herald Sun of “serious vilification”, was dismissed because it was a criminal charge and thus outside the jurisdiction of VCAT.

As Sisalem’s claim did not succeed on either ground, the judgment did not consider the Herald Sun‘s defence, which was that even if the article did meet the threshold prohibited by the act (which the Hun‘s lawyer Haroon Hassan argued it did not), it should be exempted by provisions in the act around media reporting and political speech.

Sisalem, who spent 10 months in 2004 as the lone refugee on Manus island with just a cat for company after the Howard government emptied the immigration detention centre of all others, faced court in June without a lawyer. He relied on a translator to follow the proceedings. He was largely unable to question Whinnett, who briefly took the stand, as most of his questions were ruled irrelevant or out of order. However, in passionately made oral arguments, he said the article was not balanced and made him fear for his safety.

Sisalem questioned what politicians could possibly know about Islam, saying they were not religious scholars. He said such speech should not be allowed because it inflamed and incited religious tensions in the community. He said:

“This is the only country I have. I’m not going to allow politicians to turn it into a war zone.”

In her ruling, member Grainger said “Sisalem bears the burden of proving his case”. “It is not an easy task,” she noted, adding that none of the “handful” of claims made using that section of the act have so far succeeded:

“I have no doubt that Mr Sisalem regards the comments made by the politicians quoted in the article as inaccurate, unfair, unbalanced and deeply offensive. I have no doubt that many other members of our community share his views. I also accept that Mr Sisalem was considerably distressed by the publication of the article and that, as a Muslim, he holds genuine concerns for his safety.

“However, this is not enough to establish a breach.”

The Herald & Weekly Times reserved the right to apply for costs. Grainger said she would allow time for such applications to be made.

Grainger’s judgment reveals that in the days after the hearing she received, from an anonymous sender, a book by Robert Spencer entitled, Did Muhammad exist?. “I have not read the book and have not taken it into account in determining this application,” she wrote.

Media Watch report stands up to scrutiny in defamation case