Media briefs: Waleed on nailing it … OzTAM doubles … Colbert’s back …

Waleed Aly discusses the consequences of being so good at nailing it. And other media tidbits of the day.

Aly’s commentary on commentary. Read enough of what Waleed Aly said on The Project last night? Bear with us — here’s something Aly said that’s unlikely to be splashed all over the internet.

At a Financial Services Council conference in Melbourne this morning, he told the audience that he didn’t particularly like how his Project editorials got rehashed and splashed all over the media within the hour. “Everyone’s chasing the next thing to generate short-term benefit,” he said.

“The most obvious examples of that are in the print world as it goes online and devolves into this click-bait thing. I’m more than happy to admit the irony here — I certainly benefit from that. But I don’t particularly like it.

“The number of articles that are ‘somebody said this on the telly last night’. It was on telly, I don’t know why you’re telling me. I just don’t know.

“But I sympathise with the predicament modern media makers are in now … I know there are news websites that say if you put Tony Abbott and something negative in a headline, clicks go through the roof. If you click on those stories, it’s your fault. But that’s the cycle we’re in. And I don’t know how you break it.”

More ratings boxes, more accurate ratings? OzTAM, the ratings group owned by the Seven, Nine and Ten TV networks, has extended its deal with Nielsen to supply TV audience measurement services, and lifted the number of homes in its various ratings panels by 50%. OzTAM and Nielsen’s new three-year agreement will run from 2018 through 2020. It covers both free-to-air and pay TV in metro and regional markets.

OzTAM said in a statement this morning that the panel expansion, which will be completed by the start of next year (for the 2017 ratings season), will take OzTAM’s metropolitan panel to 5250 homes (up from 3500) and its subscription TV panel to 2120 homes (from the present 1413).

The regional TV panels are also getting beefed up to 3000 homes, making Australia’s nightly TV measurement system reliant on the tracking the viewing habits of 10,000 homes. OzTAM CEO Doug Peiffer said: “This new agreement builds on our partnership [with Nielsen], provides continuity and delivers even greater accountability. And with the additional OzTAM and Regional TAM panel homes, Australia will become the world’s largest per capita people metered market.” — Glenn Dyer

Video of the day. He’s back, just when we need him the most. Stephen Colbert (the blowhard conservative commentator) made a surprise guest appearance on Stephen Colbert’s (the real guy) Late Show … 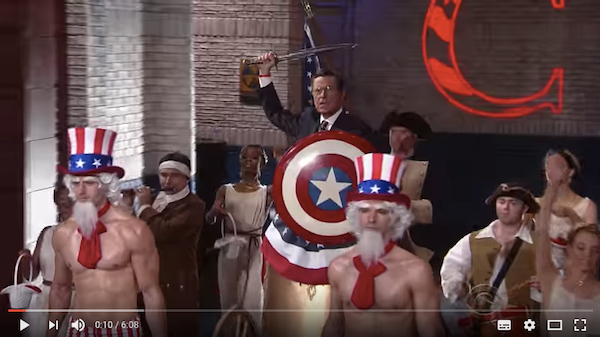 Front page of the day. The Plain Dealer, Cleveland’s hometown rag, is going big with this local party …

It appears that Waleed Aly is the only statesman in Australia. Cool-headed, insightful, analytic, articulate, thought-provoking – & credible.