Isentia Index: fear across Europe, and a focus on defence in the new ministry

Pauline Hanson is back and here to stay.

The terrorist attack in Nice and the bizarre attempted coup in Turkey pushed Foreign Minister Julie Bishop up to second place, one ahead of Pauline Hanson, whose Q&A appearance brought forth the expected tumult from the watching social media masses, who was one ahead of former PM Tony Abbott, who remains on the backbench, despite the best PR efforts of fellow backbencher Senator Eric Abetz.

Ministerial changes pushed Christopher Pyne, Greg Hunt, Josh Frydenberg, Kelly O’Dwyer and Marise Payne up the list, with Pyne the new Minister for Submarines, taking a pretty large chunk out of Payne’s portfolio, while Greg Hunt gets to finally move on from what some media suggested may have been a personally difficult challenge in Environment, which gets joined to Energy in Frydenberg’s new portfolio. That will be an interesting one to watch.

Ewen Jones appears to have lost the seat of Herbert in far north Queensland by eight votes, but that obviously will go back to the stewards for some more tests, while strangely, Tasmanian Senator Richard Colbeck received more coverage for his probably failed attempt to outfox the Liberal preselectors and get back in on his own steam, than Lisa Singh did for her clearly successful attempt to do exactly the same thing to Labor head office. 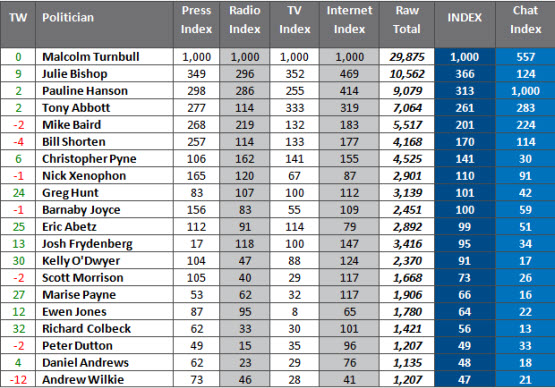 Pauline Hanson way ahead on social media, although will she stay there without appearing on Q&A every week? Quite possibly she will.

Also a clear number one on talkback, with plenty feeling she had been picked on, not just by the live audience or panel, but chiefly by the moderator.

Should the very definition of a bigoted comment be called out for what it is? Well, if Paul Ryan can do it to his own party’s nominee, I don’t see why we can’t do it here.