Three minutes to midnight and our politics ignores the climate threat

The further burning of vast carbon reserves is an attack on the human species, writes scientist Dr Andrew Glickson.

“We are as humans conducting a massive science experiment with this planet. It’s the only planet we’ve got … We know that the consequences of unchecked global warming would be catastrophic … We as a human species have a deep and abiding obligation to this planet and to the generations that will come after us.”

March 2016 set a new record temperature for that time of year, according to NASA’s Goddard Institute for Space Studies. The global temperature was 2.30 degrees Fahrenheit (1.28 degrees Celsius), warmer than the average for March from 1951 to 1980, which is used as a baseline.

Despite this, with few exceptions, little mention is made of the existential threat posed by runaway global warming in the context of the recent elections in Australia, and coming elections in the United States — nor of the risk posed by some 15,000 nuclear missiles, many of which are on hair-trigger alert.

As tensions grow between the world’s superpowers in the Ukraine, Syria, South China Sea and elsewhere, the risk of nuclear exchange by accident or design is only growing, as indicated by the Bulletin of the Atomic Scientists which set the Atomic Clock on three minutes to midnight.

Politicians and the media scream about lies perpetrated by both parties’ propaganda machines, but say next to nothing about the climate catastrophe projected at 4 degrees Celsius later this century by climate science, including research institutions (NASA, NOAA, NSIDC, Hadley-Met, Tyndale, Potsdam, BOM, CSIRO) and the bulk of the peer reviewed scientific literature.

That the political and economic elites and majority of institutions are able to preside over what amounts to the demise of civilisation and nature as we know it could not happen had it not been for two factors:

In both instances, responsibility resides in large segments of the media, both private owned and public, driven by the ratings, where the minutiae of day-to-day power games appear to matter more than the future of life on Earth.

Whereas the Paris accord has given a respite to vested interests, allowing them to claim the climate is under control and global warming can be limited to 1.5 degrees Celsius, the means of achieving this goal are not specified nor is everyone aware this level has already been exceeded on the continents.

Had it not been for short-lived shielding of the Earth by emitted sulphur aerosols, the mean global temperature rise above 2 degrees Celsius would have already been breached.

Manifestations of a shift in state of the climate include the current rise in CO2 in the range of three to four parts per million (ppm) per year, the fastest recorded for the last 65 million years, extreme rises in Arctic temperatures, a plethora of extreme weather events such as cyclones, floods and fires, the demise of habitats such as the Great Barrier Reef where corals die due to high water temperatures and coral bleaching, and other developments.

In total, CO2 levels have risen from about 280 to about 407 ppm since the 18th century, currently rising at a rate of about three to four ppm/year as measured at Mouna Loa observatory, Hawaii, posing an existential risk for nature and for civilisation.

The consequences of further burning of the vast carbon reserves buried in sediments and in permafrost and bogs can only result in a mass extinction of species that rivals that of the five great mass extinctions in Earth history.

“Burning all fossil fuels would create a different planet than the one that humanity knows. The palaeoclimate record and ongoing climate change make it clear that the climate system would be pushed beyond tipping points, setting in motion irreversible changes, including ice sheet disintegration with a continually adjusting shoreline, extermination of a substantial fraction of species on the planet, and increasingly devastating regional climate extremes.” 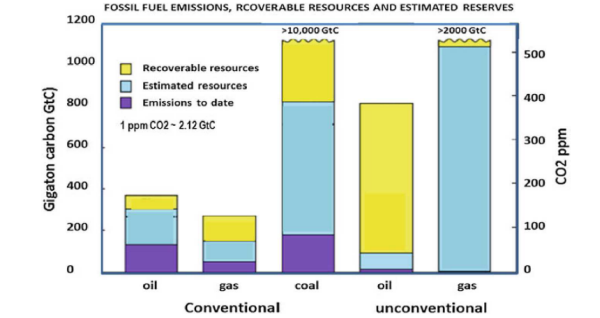 Conducted with the knowledge of the consequences of continuing combustion of carbon constitutes an act whose lingual description exhausts the resources of the English language. The term “crimes against humanity and nature” comes to mind.

Is there anything in international and national laws which can avert the continuation of current carbon emissions? The manifest paralysis of the global political system in the face of the climate impasse, evidenced by the failure of a succession of UN Framework Conventions on Climate Change to undertake meaningful steps to reduce CO2 emissions, requires a search for alternative avenues to limit the deleterious consequences of continuing carbon emissions as reported by the IPCC Working Group II, and pending the report by Working Group III.

Traditionally, political and economic negotiations aim at a compromise. Unfortunately, no negotiation is possible with the basic laws of physics that dominate the climate system.

Do global and national legal systems offer any possibilities in this regard? In exploring potential legal restrictions on carbon emission, I believe the following international and national instruments are relevant.

Crimes against humanity are defined by the Rome Statute of the International Criminal Court Explanatory Memorandum, which states:

“… crimes against humanity are particularly odious offences in that they constitute a serious attack on human dignity or grave humiliation or a degradation of one or more human beings. They are not isolated or sporadic events, but are part either of a government policy (although the perpetrators need not identify themselves with this policy) or of a wide practice of atrocities tolerated or condoned by a government or a de facto authority …”

The United Nations International Covenant on Civil and Political Rights, part III article six, states, among other things, that:

“Every human being has the inherent right to life. This right shall be protected by law. No one shall be arbitrarily deprived of his life … When deprivation of life constitutes the crime of genocide, it is understood that nothing in this article shall authorize any State Party to the present Covenant to derogate in any way from any obligation assumed under the provisions of the Convention on the Prevention and Punishment of the Crime of Genocide.”

Australian Commonwealth and state laws regarding air quality standards and prohibition of pollution also come to mind. Recently, a successful challenge has been raised in the US in this regard by Professor James Hansen.

It follows that, where and when the majority of authoritative scientific institutions, based on the bulk of the evidence, indicate beyond reasonable doubt that open-ended emissions of greenhouse gases inevitably lead to a major shift in the terrestrial climate, and thereby the demise of humans and of species, a toleration and/or condoning of continuing emissions by governments contravenes, at the very least, the spirit of international laws.

The deleterious alteration of the climate over populations and nations constitutes an assault against humanity and nature. And yet, to date, while spending about $2 trillion dollars each year on so-called “defence”, it appears human laws and institutions are paralysed, unable to avert the portents of a climate catastrophe.

One very good reason why we need a International Law that allows prosecution of “crimes against the commons”, is that we can proceed with banning fossil carbon worldwide. After replacement energy supplies are put in place, the ban can be enforced under a United Nations mandate.

We had better come clean about gas versus nuclear, too. Wind requires gas backup, but gas must go, so we won’t have wind to power Australia’s heavy industry or homes and desalinate our water. Nuclear can do both, as well as provide power to make synfuel from CO2 captured from the atmosphere.

>Nuclear can do both
Is the life cycle cost irrelevant?

Absolutely agree about fusion – where can it be hiding?

I would love to think an approach like this could succeed. Human psychology is ill equipped to deal with climate change – it’s too remote, too impersonal and we are all complicit, so people choose to disregard or dispute the science, or agree in principle but still somehow find reasons to avoid acting. Maybe an impersonal, ‘objective’ institution like international law can be brought to bear on the situation, sidestep our cognitive biases and somehow systematically force us to react?

Dr Glickson: you say “The global temperature was 2.30 degrees Fahrenheit (1.28 degrees Celsius), warmer than the average for March from 1951 to 1980, which is used as a baseline”.
Why is the baseline period so relatively short?

When you look at the trillions of dollars invested in coal, oil and gas production and the crisis in the financial world if money invested was lost, you can then understand how politicians hide the real truth. Not sure of the answer, but we need something soon.