The former Prime Minister Tony Abbott didn't attend a function for Coalition MPs at the Lodge, choosing to spend the evening with his mother instead.

It’s all hands on deck in Canberra today, although a few Liberals may be starting their terms in the 45th Parliament with a sore head after enjoying victory champagne and canapes with Prime Minister Malcolm Turnbull at the Lodge last night. While all Coalition MPs were invited to the little shindig, there was one very notable absence: former Prime Minister Tony Abbott was invited to the Lodge, but didn’t feel like attending, so he had a celebratory champagne with company that would give the right amount of attention — his mum, Fay. This photo was uploaded to Facebook last night, with Abbott writing “good to catch up with Mum to thank her for all she’s done for me” … 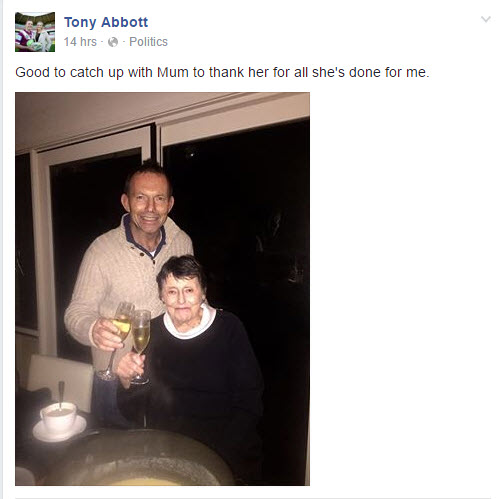 Now there’s never a bad time to show your mum that you appreciate her, but his absence has been noted by many in the media. Social Services Minister Christian Porter told Ellen Fanning on RN Breakfast that it was no big deal though. When he’s not being conspicuously absent, you might find Abbott being inconspicuously present, as (partially) seen in this photo posted to Facebook yesterday by the West Coast Eagles AFL team … 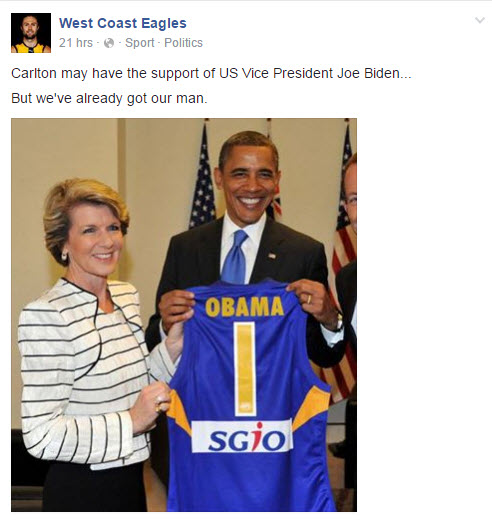 The club’s media team was reacting to the news that US Vice-President Joe Biden had been presented with a Carlton jumper, just reminding everyone that Biden’s boss was on the Eagles’ bandwagon. Abbott has been cropped out of the side of this photo, leaving Barack Obama with the most powerful Eagles fan of them all, Foreign Affairs Minister Julie Bishop.