Media briefs: don’t bet on it … the end is nigh … goodbye, Norma Jeane …

Bendigo says goodbye to an icon. And other media tidbits of the day.

Curb problem gambling? Don’t bet on it. Great to see News Corp Australia throwing in its lot with the gambling clique (in fact the whole company, globally, given its eagerness to exploit gambling revenues by The Sun in Britain).

Damian Eales, the company’s head of Australian metro and regional publishing is moving News Corp into the “fast-expanding wagering industry” (to quote a story in the Media section of today’s edition of The Australian) “with a new hire to spearhead plans to monetise a national sports loving audience”. In other words, News Corp Australia wants to turn those “fantasy” football and coach competitions into revenue and profits, as well as hooking up with online gambling companies — and that means opposing attempts by Senator Nick Xenophon and independent MP Andrew Wilkie to place restrictions on gaming.

Eales wants to see the racing form guides, published across the empire’s myriad papers, monetised (although the racing clubs might have a say in that). The paper said Eales announced on Friday that Simon Anderson had been appointed to the “newly created role of group director, wagering”. Anderson is a former general manager of the Sydney papers, the Daily and Sunday Telegraphs.

There was another interesting story in the same media section revealing that the CEOs of our three commercial TV networks are opposed to any move to ban gambling ads during sports broadcasts. It is a veritable meeting of profit and loss accounts. News Corp has an indirect stake in Ten via its 50% holding in Foxtel, which owns 14.9% of Ten. The headline on this story also said it all: “TV chiefs rail against Xenophon, Wilkie threat to gambling ads”.

So by these stories we can take it that News Corp’s papers and the Nine, Seven and Ten media groups and owners, plus Fox Sports and Fox Sports News (100%-owned by News) will run dead on anti-gambling stories and start attacking any gambling activists and politicians, like Xenophon and Wilkie? Is that why The Australian in particular went for the throat in the campaign in their attacks on Xenophon? — Glenn Dyer

The end is nigh. There are going to be some important announcements from some of the world’s major newspaper groups in coming months about their futures that will result in the nature of journalism, its reporting and distribution, changing dramatically in Australia, New Zealand, the UK, Canada, Italy and the US — for a start.

From Fairfax Media here, to The New York Times in the US, Postmedia in Canada, The Telegraph and Guardian in the UK, and two major groups in Italy, the changes will have newspaper editions culled, along with journalists and support staff jobs (or already going in the early stages of the change) and distribution change dramatically as the long hoped for saviour of revenues — digital advertising and paywalls — prove to be a chimera.

In fact that seems to be the driver of much of the changes: the realisation that going digital with paywalls, and boosting ad online ad revenues will not save them – nor will going exclusively towards mobile media and the likes of Facebook and Twitter. Underlying these decisions, though, has been the acceleration in the size of the fall in revenues from print ad and paper sales in the past year. This has been especially noticeable in the UK, Australia and New Zealand, Canada and parts of the US market.

In some cases, governments will provide assistance. Many companies will head towards the sort of model the Financial Times is pushing on with: cutting back on the primacy of the print edition and posting news stories, columns and analytical items when they become available to the editors and not when published. But even the FT is looking at weaker print ad sales (but its How To Spend It magazine remains a gold mine) in the current sluggish UK and global economic environments. — Glenn Dyer

Front page of the day. The Bendigo Advertiser bids goodbye to a statue of an icon … 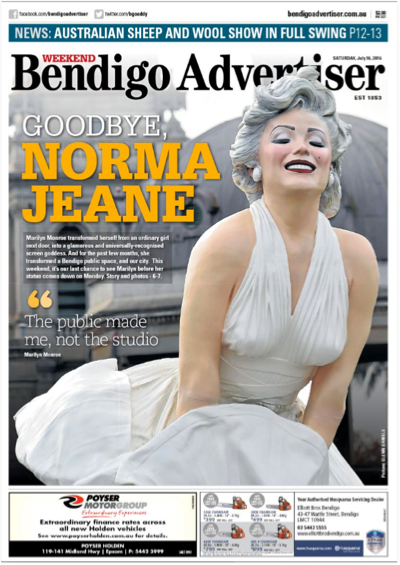