Australia would be mad not to support Kevin Rudd as United Nations secretary-general. As mad as he might be.

So this is real … 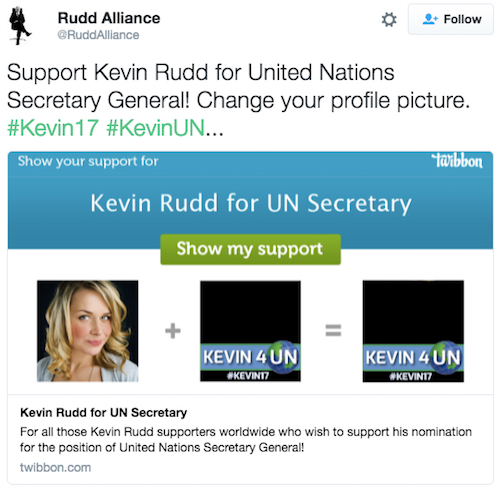 … and so should Australia’s support for his near-maniacal attempt at United Nations glory be. No, really. How’s this for three reasons:

There are better, more qualified candidates to run the UN. They’ll almost certainly beat Rudd, rest assured. But for the moment, Malcolm Turnbull and Julie Bishop should swallow that sick feeling in their mouths and add a profile picture twibbon for KevUN.

Look, I’ll confess I rather like the thought of Turnbull & Bishop choking on their own vomit, as they find themselves recommending K.Rudd for this gig.
But the fact remains he’d be a bloody disaster.
Not inconceivable he’d be OK?
Afraid not. That ego proved pretty disastrous in the relatively small pond of Oz politics. On the world stage… Cringe!
Also, there are plenty of examples on offer around the globe right now, where there were much better candidates for various jobs, but we don’t have to worry about the bad ones?
Donald Trump anyone?
Boris Johnson?

Point 2 is the best reason – if he were to promise to stay away.

Aggro was too busy?

DO we really want to ruin the UN? I’d rather see Helen Clarke get it.

Well, I’d vote for Kevvy as world overlord, but only if he transforms himself into a lesbian cyborg first.