What is going on in the South China Sea?

What is going on in the South China Sea? What is the nine-dash line? What does the Hague ruling mean? And will there be war? 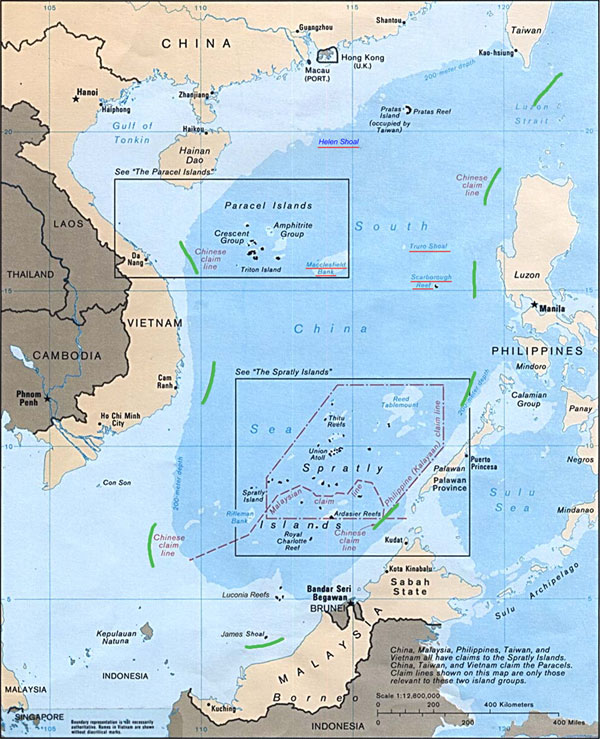 China is outraged by a decision by an international tribunal in The Hague that rejected the country’s claim over large portions of the South China Sea, and tensions between China and the Philippines are likely to continue over the coming months as China threatens to ignore the ruling. But what is the dispute about, and is this the end of it?

Where is the South China Sea?

This part of the Pacific Ocean is, funnily enough, south of China. It is, however, also west of the Philippines, north east of Singapore, and north of Malaysia, Indonesia and Brunei.

What does China claim?

China has claimed a so-called nine-dash U-shaped line of area of the ocean across most of the area in question as far back as 1947, just after World War II. It’s been unclear what this line actually means, but it has been viewed as a claim on the Paracels, Pratas and Spratly set of islands on the China side of the line.

Countries can’t claim ocean areas, but they can claim islands. And islands get an exclusive economic zone of 200 nautical miles where the owner of that island can use the resources in the ocean as they wish, under the United Nationals Convention on the Law of the Sea (UNCLOS).

Over the years it has become seen as a boundary, and in addition to the islands, China believes it can claim sovereignty of the sea inside the boundary and the fishing and resources mining that comes with that ownership.

What do other nations in the region claim?

Vietnam also lays claim to Paracels and Spratly islands, while the Philippines says its proximity to the Spratly Islands gives it ownership of the region. Other countries such as Malaysia, Indonesia and Brunei make claims having economic exclusive zones in the sea by definition of the UNCOLOS. There is some overlap, and countries negotiate over where the boundaries lie.

Three years ago, the Philippines took a claim to the Permanent Court of Arbitration  to seek a decision on whether China’s ownership was valid, arguing that its entitlement to the region should extend beyond the boundaries offered by the UNCLOS, and the “nine-dash line” was contrary to the convention.

The Philippines said in submissions to the tribunal that China had unlawfully interfered with the sovereign rights of the Philippines in the region, and prevented Filipino fishers from fishing in the area. The country also accused China of unlawfully building artificial islands within the zone.

Why does it matter?

There’s a lot of oil in the area, and it is estimated that there could be billions of tons of oil there to be mined, and a matter of sovereignty for China. It’s also a key trade route, with $5 trillion worth of trade passing through the area each year.

What was the ruling?

The Hague Tribunal ruled that China had no historical right over the nine-dash line, and China, by fishing, mining and building the artificial islands in the region, was in violation of the Philippines sovereign rights. The Spratly Islands  were considered “rocks” rather than islands, and therefore were not given the maritime zones offered to islands.

What was China’s response?

China throughout the arbitration process said “it will neither accept nor participate in the arbitration unilaterally initiated by the Philippines” and said the tribunal lacked jurisdiction on the issue. After the ruling, Chinese President Xi Jinping said that “territorial sovereignty and marine rights” would not be affected by the ruling, but that China was still committed to resolving the dispute.

Where does Australia (and the US) stand?

Foreign Minister Julie Bishop has said that there would be “strong reputational costs” for not complying with the decision, and Australia would continue to exercise its freedom of navigation rights to fly over and pass through the South China Sea.

Labor’s defence spokesperson Stephen Conroy was more critical and accused China of being “very aggressive” and said Australia must demonstrate its support by sailing through and flying over the area of the South China Sea.

The United States Department State Department has also encouraged China to act responsibly in response to the decision. In the past, the US has sent its military into the region near the disputed areas. China has previously pointed out that the US hasn’t ratified the UN Convention on the Law of the Sea.

The decision was made by an international tribunal, and the finding is binding, but enforce-ability of it remains questionable. The Philippines could patrol the area and attempt to force China not to enter the region, but that seems an unlikely prospect given the sheer size of China’s military compared to that of the Philippines. Most are expecting that foreign governments like Australia and the US will be pressuring China to respect the decision.

There is hope that China will back off and will comply with the ruling by not mining or fishing in the areas deemed to be economic exclusivity zones for its neighbours.

I understand that you have space limitations, but any discussion of the South China Sea issues should not ignore at least two salient points. The first is that Taiwan, whom you fail to mention, makes exactly the same claim as the PRC to the seas within the so-called 9 dash line. After all, they, as the then Nationalist government of China, drew the line in 1947. Curiously, the Australian media never talk about Taiwanese “aggression” in pursuing their claim, which includes island building as well as a major military base.
Secondly, you should also mention that a significant motive for the PRC’s actions is that they are surrounded by American military bases which have a clear hostile implication. Just look at the 2002 DOD Paper, Vision 2020 for some instructive insights as to American motives.
Thirdly, you might also have mentioned Operation Talisman Sabre, an annual US naval exercise that Australia participates in, that practices blocking the Straits of Malacca through which exports and imports vital to the Chinese economy transit each year (about $5 trillion worth).
If you really want to demonstrate some grasp of the issues, learn about the SCO, which has huge implications for Australia, most of them deleterious, especially if we continue to act as US lackeys in the South China Sea and elsewhere.

So we are worried that our export routes of iron ore, coal, food etc to, and imports of manufactured goods from, China will be choked off by… China?
I guess that’s why the US has established an unsinkable aircraft carrier at Darwin – let’s hope that the recent lease of Darwin harbour facilities for 99 years isn’t disrupted, we need the rental.