The return of Pauline Hanson could see domestic violence victims harmed by changes to family law driven by embittered One Nation voters.

The Nationals — emboldened by their relative election success compared to the Liberals — are pushing hard for more leverage in the Coalition under a wounded Malcolm Turnbull, and the secrecy of their dealings, and agreement, with the Liberals is already coming under fire. But one particular issue should be deeply troubling: the possibility that the Nationals will secretly move to make the Family Court system even more hostile to victims of domestic violence than it currently is.

In today’s Australian Financial Review, Phil Coorey reports that the Nationals, led by Barnaby Joyce, are considering trying to embrace elements of the One Nation agenda in order to head off the threat posed by Pauline Hanson to their far-right flank in the bush. One of the key differences this time around in relation to Hanson is that, instead of having Nationals leaders prepared to stand up to her as Tim Fischer and John Anderson were prepared to do in the late ’90s, the current generation of Nationals and LNP MPs are more likely to endorse her agenda of xenophobia, opposition to foreign investment and Islamophobia.

One issue where there is further scope for the Nationals to co-opt the extremist agenda is family law. As news.com.au’s Malcolm Farr recently discussed, much of Pauline Hanson’s support is drawn from embittered middle-aged men who want to overturn the Family Court and the existing child support system. These are men deeply angry that their privileged social status as white males has been undermined by social and economic change in recent decades, and more equal treatment for women and children in family law is a particular source of unhappiness. Hanson’s party wants to abolish the Family Court and replace it with a body of “mainstream” community members, dump current child support arrangements, change legal aid to require losing parties to pay costs, and make joint custody the “option of choice” for the family law system.

Coorey quotes one Nationals MP as flagging family law as an area the Nationals needed to “treat seriously”.

This has potentially horrific implications for victims of domestic violence. The Howard government’s 2006 changes to family law — intended to appease “fathers’ rights” groups –already went in this direction: the Family Court was to ensure children have a “meaningful relationship with both parents”. That has already resulted in a de facto overriding of children’s right to safety, despite changes to the law in 2012 by Labor to give greater priority to children’s safety and addressing family violence.

In June, former Australian of the Year Rosie Batty spoke at the National Press Club on a campaign by Women’s Legal Services Australia for amendments to the Family Law Act to address current problems with the treatment of domestic violence victims by the Family Court. She spoke of terrifying cases in which children have been ordered to live with abusive parents, including a case where a victim of sexual abuse was repeatedly returned to his abusive father by police until the boy produced evidence of his abuse.

The campaign includes providing greater resourcing for the Family Court to help victims of domestic violence with more, and more evenly distributed, trained professionals available through the system to deal with family violence issues, and a specialised pathway for family law cases involving domestic violence. It also urges legal changes such as an end to domestic violence perpetrators being able to cross-examine their victims in court, and a greater legal emphasis on child safety rather than parental access.

A few days after her Press Club speech, on what would have been Luke Batty’s 14th birthday, Batty presented a petition for the campaign to politicians from the Coalition, Labor and the Greens.

The policies put forward by One Nation, which look likely to inform the Nationals’ deal with the Liberals, would do exactly the opposite. Under the legal aid changes, domestic violence victims who complain of their former partners’ abuse would be liable for the latter’s legal costs if a court is unable to determine whether abuse has occurred, providing a massive deterrent to women raising abuse in family law proceedings (which is presumably the intention). They would force children to live with abusive parents under One Nation’s “option of choice” of joint custody, and slash child support payments for women. Trained professionals and experts would also be removed from the system and replaced with “mainstream” community members picked, presumably, by governments.

The secrecy with which the Liberals and the Nationals are cloaking their agreement is all the more alarming in this context. There’s a very real chance, so that the Nationals can co-opt One Nation supporters, that Barnaby Joyce will demand family law changes that elevate the rights of abusive parents and undermine the rights of domestic violence victims in a system already tilted against the latter. How will a weakened Turnbull, under pressure from reactionaries in his own party, respond? 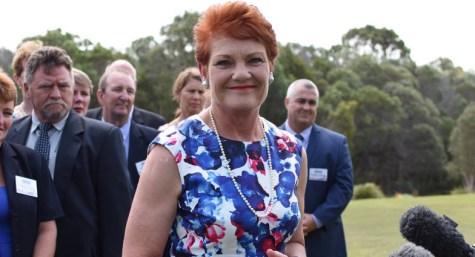 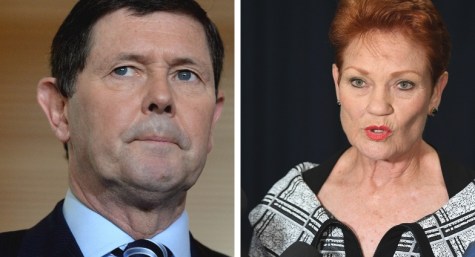 Family law legislation is putting women and children at risk

Will the agreement between the Liberals and Nationals be made public to all M.P.s in both parties, or is it an agreement exclusively between Turnbull and Joyce.
No doubt all M.P.s would be anxious to know what as been agreed and no doubt if there some dis-satisfaction with the content someone will leak the document to te media.

Despite his best efforts Tony Abbott failed to take Australia back to the 1950s but now the National Party may take a crack at it.

Will Turnbull spare us? Not likely.

Bernard, I dispute that anyone under Howard’s reign stood up to Hanson. In fact they shifted to the right and embraced some of her ranting. That is the biggest worry, a repeat. I am concerned by the Nationals, however. The leader is a consort of water thieves, Scullion appears a numbskull and Fiona Nash God save us is not fit for office.

She pushed at an open door.

They “took her on” (siccing Abbott after her – cashed up with Coleman’s contacts) – because she was taking votes off them.

“embittered middle-aged men ….. privileged social status as white males”. Wow – can’t you make a point without insulting generalisations? Poor work Bernard as the rest of the article is quite worthy.

I have been a subscriber for about 10 years. This has got to be the stupidest, most one sided article I have ever seen in Crikey. If this is typical, then clearly what Bernard knows about this topic could be written in capital letters on a disprin. Then add in the blatant sexism in his comments about fathers. Frankly, this article is a disgrace and should be taken down. The next time BK has a go at the Australian about one sided coverage think these three words: Kettle, Pot, Black.

Been given the big A by a fed up woman, have you?

Well no as it happens. But, as a father who loves and cares for his children, you’re not the first to disparage my views and you won’t be the last. As a father, you learn pretty quickly that your personal experience of the system isn’t fashionable. Just ask Bernard. We’re all privileged, middle aged, white males. So you and Bernard, disparage away. It’s pretty normal.

“Some of my best friends are …” but it’s the ‘but’ that is relevant.

OK, I am an embittered middle aged man , but you Mr Keane are a F***WIT.
In 10 years I have not been able to get so much as a glimmer of sense out of Child Support while continually having to fight off so called “changes of circumstance’ by the other party.
Since when does Child Support = Domestic Violence ? Dr Dagg is correct, this article is a disgrace and should be taken down, )Oh and I am not a supporter of the Nationals or for that matter Pauline Hanson)

CML
Reply to  Splinky the Elder

You have just proved Bernard’s point!

Can you then explain his point to me?