Pokemon Go: more popular than snow, but trumped by Wimbledon and the Tour de France

Media outlets gonna catch them all.

If you want to avoid the ceaseless Pokemon Go coverage, you’d best avoid the internet. And TV. And radio. You’d be somewhat safer sticking to the papers.

Isentia figures of the week’s most popular issues shows the augmented-reality mobile game was mentioned 2678 times in Australian online media outlets in the past week, making it the fourth most-mentioned topic for online media sources over the period. Pokemon Go was mentioned about a third as often as the federal election (mentioned 8382 times) and only slightly behind the greyhound racing ban (3483 mentions) and the Euro 2016 football tournament (3692 mentions).

Television and radio also gave the game a hefty dose of free publicity in the past week, with 2003 and 1460 mentions respectively. But a relative paucity of print coverage (politics has eaten the papers) mean its total mentions are well behind things like the Wimbledon tournament, the Dallas shootings and the Tour de France. 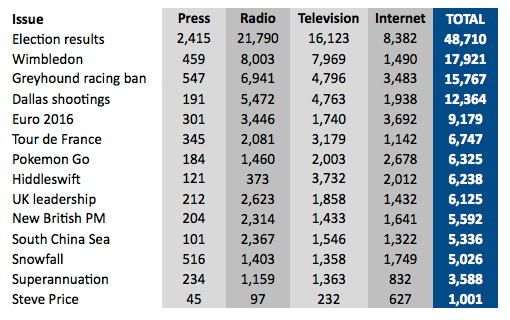 BoJo and now ScoMo: is the centre-right being torn apart by far-right ‘tigers’?