Icy reception. Philip Ruddock had to brave a gaggle of protesters yesterday when he fronted the Wheeler Centre’s audience to talk about his four decades in Parliament, now drawn to a close. Police were out in force blocking the front entrance, meaning those with tickets had to go through a side entrance, where police allowed attendees to go through in single file once their tickets were checked. 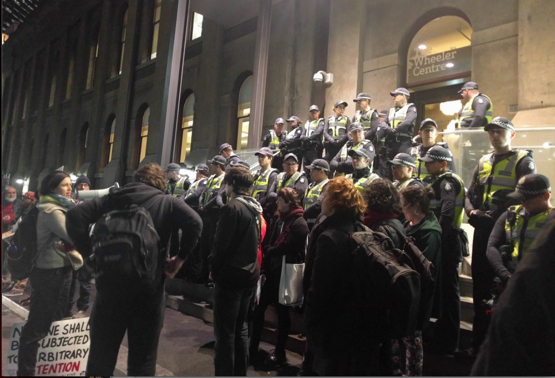 “Ask Ruddock about children overboard,” urged a protester as Ms Tips filed past. Ruddock seemed pleased with the reception, telling the audience he was glad to still feel relevant. As to children overboard, the topic didn’t come up, but refugee issues did dominate a discussion between Ruddock and Sally Warhaft, as she and her audience tried to come to terms with a man who frames his parliamentary legacy in terms of human rights (when leaving Parliament he was appointed as Australia’s UN envoy on the issue), but who is most associated with what is seen as the direct contravention of those rights in relation to Australia’s treatment of asylum seekers.

Asked by an audience member how the former immigration minister reconciled his career-long opposition to the death penalty with his support for offshore detention, described as a “living death”, Ruddock drew on his own experiences of global refugee camps to say no one could claim conditions in Australia’s detention camps were anywhere near as bad. He repeatedly insisted that public support for immigration rested on the public having faith in the “integrity” of the system — which includes Australia retaining control of who it allows into the country. He insisted that Australia must help those who need it the most, and not those who have the money to pay people smugglers.

He was facing a tough audience, which was polite but generally critical — perhaps as would be expected in inner Melbourne. Before the questions on refugee policy began, Ruddock was asked why he was stepping down. He was blunt in his response. “Am I likely to come back as a minister? I listened to my leader, who was talking about generational change … He wasn’t going to be bring me back as a minister. I would be back chairing a parliamentary committee.”

Ruddock’s current role at the UN is part of Australia’s efforts to secure a seat on the UN Security Council. Asked about the realpolitik surrounding this, Ruddock acknowledged the negotiations were highly political. But to Ms Tips’ disappointment, he declined to elaborate, saying the politics was best left unseen.

An hour later, when the talk ended, it appeared the cold had chased off the protesters. They were nowhere to be seen.

“Our federal election campaign focused on areas where we felt we could make the most difference, either through our own candidates or by helping other parties or candidates that share our values.”

The email, from national secretary Ray Moran, criticised other parties for not having enough boots on the ground:

“Contrary to the spin from mainstream media, candidates for Pauline Hanson’s One Nation and the Nick Xenophon Team in WA and Victoria are unlikely to progress much further in the senate count. The small number of parties that recommended preferences toward them were conspicuous by their absence on polling day. With no booth volunteers handing out how-to-vote cards, voters were generally unaware of these preference recommendations. Consequently voters were likely to distribute their preferences randomly or to one of the major parties.

“Our candidates in Victoria and Western Australia were the beneficiaries of preference recommendations from the Liberal Party as well as several minor parties.”

Moran also told followers that the result meant the party was right when it comes to opposing same-sex marriage: “The swing to minor parties should see BOTH major parties re-assess their position on re-defining marriage.”

Credlin’s new gig? Former chief of staff to Tony Abbott Peta Credlin has made quite the splash in the past two months since taking up her gig as a commentator on Sky News. Last night on Sky she was asked why she hadn’t run for preselection to get her own seat in Parliament, and Credlin answered that, despite offers of different seats, she didn’t have the “thick skin” to deal with being in the public eye. She also said she didn’t want to play the game to take instructions from branch leaders. “I didn’t think that I wanted to kowtow to some nameless nobody in a branch in order to get preselected and God forbid have to kowtow my whole time in parliament to hold onto it.” So what will Credlin do next and who is she willing to “kowtow” to, if anyone? A caller to 3AW said this morning that she is due to take up a position at a public company based in Melbourne. Watch this space.

Joe’s in town. While both Donald Trump and Hillary Clinton are keeping pundits guessing on who they will nominate as their running mates, the current Vice President of the United States is due in Melbourne this weekend, and is reportedly going to enjoy our country’s greatest game while he is here. Biden will be in town to launch the new Comprehensive Cancer Centre. The Vice President is close to many cancer projects; his son Beau died of the disease last year aged 46. The visit has been confirmed by the Victorian government, but details about the exact timing of the opening and which AFL match Biden will attend are scant. It’s believe that the US Secret Service have already inspected the MCG, where Carlton is due to play West Coast on Sunday. Our own Foreign Affairs Minister Julie Bishop is an avid West Coast fan — will she fly down to Melbourne to make sure he supports the right team?

Singing a song of ‘sod this’. Yesterday we noted that outgoing British Prime Minister David Cameron had sung a few notes of an unidentified song as he returned to 10 Downing Street after a press conference. While the few notes have been analysed by others, our tipsters suggest it could be Nat King Cole’s Nature Boy or Sensoria by Cabaret Voltaire. Ms Tips can’t decide either way.

Trump on Hillary. What does Donald Trump think about Hillary Clinton? Now he calls her “crooked”, “a liar or incompetent” but back in 2008 he told radio listeners “I know her and she’d make a good president or a good vice president”. The recording has been revealed by the Wall Street Journal, which has found many segments from his radio segment Trumped! recorded between 2004 and 2008, including his views on tattoos and FHM‘s sexiest women list.

Heard anything that might interest Crikey? Send your tips to boss@crikey.com.au or use our guaranteed anonymous form

Bob Carr, asylum seekers and the ghost of Philip Ruddock

After seeing the clip of Cameron, the song that popped into my head was, All Of Me. Sort of makes sense.
Oh you took the part
That once was my heart
So why not take all of me?

I remember Phillip Adams saying that he was once a close friend of Ruddock until his refugee persecution. He asked “how could you do this?” and Ruddock replied along the lines of I’ve waited 20 years to become a minister. Says it all.

My favourite quote from the Cadaver was during the second Rodent government, “whole villages in Iraq are deserted as they are packing up to come here illegally.“.
He’ll be such an adornment for UN Human Rights.

Credlin – she can dish it out but she can’t take it?
…. And “protesters as geese”?

Someone talking to Patricia Karvellis the other day suggested Cameron was humming the theme to West Wing.