Britain's newest PM might need to rethink her media strategy. And other media tidbits of the day.

May’s media ties. Britain’s next prime minister is famous in Westminster for not cultivating ties with the country’s media elite, as this Politico piece from a few days back reveals.

“It goes against conventional Westminster thinking, but [Theresa] May’s lack of close ties to the media elite is actually an asset at a time when the public is fed up with the London establishment, MPs who support her bid for the Conservative leadership said …

“In stark contrast to others who have aspired to the highest office in British politics in recent years — Tony Blair, Gordon Brown, David Cameron, George Osborne, Boris Johnson, Michael Gove — she has given little effort to building alliances in the press.

“For May, courting the media has simply not been a priority.”

Despite a lack of deep links with the media class, May secured the support of the Daily Mail‘s influential editor Paul Dacre. He’s described in the piece as a “huge admirer” of hers. — Myriam Robin

Trudeau-hating Canadian media group needs his help. Over in Canada, the Trudeau government is considering ways to give state aid to Canada’s largest publisher, Postmedia Network, which is staggering under too much debt, and its shares are all but worthless.

Ongoing discussions are being held with media groups via an independent facilitator to try to get some sort of consensus on financial and other aid for the sector (which already benefits from tax preference given to Canadian advertisers spending money with Canadian publishers and other media).

But Postmedia is the black hole everyone wants to stop happening — it has just reported its 14th successive quarterly loss as revenues plunged 13% in the three months to May as print ad spending continues to plummet. The company’s future remains problematic, even after its latest attempt (and what will probably be the last) to ease its financial pressures.

Postmedia is planning a radical restructuring plan aimed at halving its debt and cutting its interest bill, but in doing so, it will wipe out 98% of the already tiny value left for shareholders in the company (the shares were trading at just 1.5 cents Canadian before the results and restructure was announced; they doubled to 3 cents in the aftermath, and then fell back to 1.5 cents and closed overnight at 1 cent).

There’s a delicious irony here; under CEO Paul Godfrey, Postmedia was a strong supporter of the previous conservative Canadian government led by Prime Minister Stephen Harper (who was a soul mate of Tony Abbott). The group and its papers strongly opposed Justin Trudeau in Canada’s election campaign last year (much the way the Murdoch tabloids and The Australian opposed the ALP and Bill Shorten in our recent federal poll). Now the company’s fate depends on the Trudeau government coming up with some sort of aid package for it and others in the country’s ailing media sector. — Glenn Dyer

The company said the Australasian business reported a 5.3% increase in headline sales in local currency (the figure and the conversion rates were not given), while in sterling, the contribution was 78.1 million pounds, down from 81.9 million in 2014-15 (because of the stronger pound for the year). This made a small contribution to the global sales figure of 1.029 billion pounds. Australasian headline earnings (whatever they are) were 19.2 million pounds, up from 16.3 million a year ago. Globally, BBC Worldwide made a profit of 133.8 million pounds and returned 222.2 million to the BBC. — Glenn Dyer

Front page of the day. China Daily and the Global Times convey the Chinese regime’s utter rejection of of The Hague’s ruling … 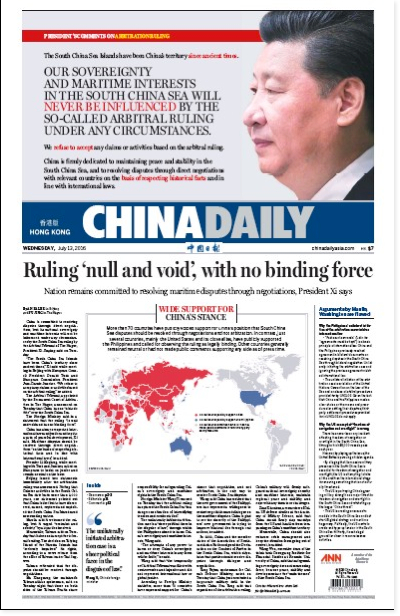 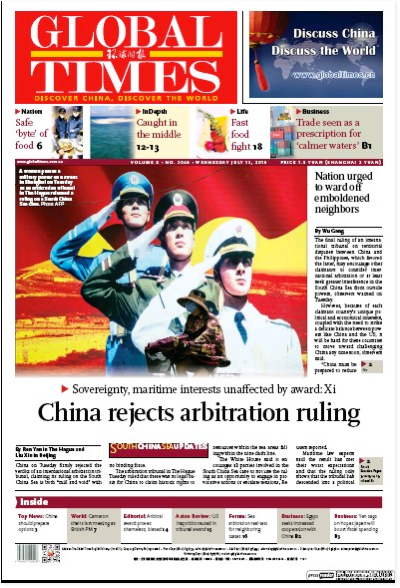 Anyone who deems Rupert Murdoch persona non grata at 10 Downing Street will earn my admiration regardless of which political side they sit.

There’ll be the usual ring-kissing of course – and if that doesn’t work he’ll release his dogs of The Ministry of Misinformation and Obfuscation.

I notice she also did not go to an exclusive private boarding school such as the recent clowns did. She may know something about everyday people and may not be a dysfunctional twit.

Given reports that PM May is planning to have more women in Cabinet, I wonder what position Leadsom will have?
Perhaps Gove & Boris make nice tea.