Isentia Index: This election is finally done, and so are the dishlickers

Mike Baird and Taylor Swift make their returns to the Index.

Despite the fact the Townsville stadium will probably be built before they have finished counting the votes in Herbert, Opposition Leader Bill Shorten has conceded defeat and Prime Minister Malcolm Turnbull will form government with 76 or 77 seats. The tone suddenly turned super conciliatory between both leaders, as they pledged to “make the parliament work”. We shall see.

After a very rare dip out of the top 20 last week for NSW Premier Mike Baird as the federal election hung in the balance, he came roaring back with the decision to ban greyhound racing in NSW, following a damning report that claimed animal cruelty was still rife within the industry and there was little hope of effective reform. It’s a funny old world when Liberal governments are banning things and Labor oppositions are criticising taxing the rich more via superannuation reforms.

Independent MPs Bob Katter, Andrew Wilkie and Cathy McGowan won’t be needed to guarantee supply, but they certainly got their share of media attention while that still looked possible. Better pack away those plans for a national whisky museum in Hobart, Mt Isa’s new international airport and a restoration of the car industry based in Wangaratta. And lastly the fixer claimed victory before his boss did with quite some exuberance, but then he’s an exuberant fella. 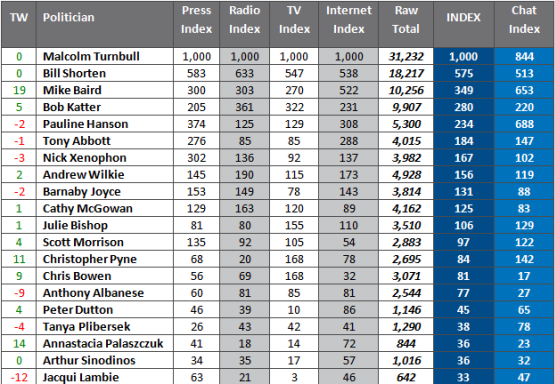 Are we partying like it’s 1996 yet? Pauline Hanson was fourth on social and first on talkback. I feel young again, but not in a good way.

Plenty of concern about halal snack packs on talkback, strangely less concern over kosher practices, I wonder why?

Why doesn’t Tay-tay get top billing? She’s far more famous. I refuse to use Hiddleswift. Other than that, isn’t it fabulous? Totally.

Not true, I worked at a starch plant that supplied food manufacturers and we had to be certified kosher across the whole plant.