Australia’s 45th Parliament could have 43 women MPs sitting among its 150 members. But they are not equally split between the parties. The Liberal-National Coalition is likely to have just 13 women among their 76 MPs, while the Labor Party is projected to have 28 women in their 69-seat bloc; that’s 17.1% compared to 40.6%. Rebekha Sharkie from the Nick Xenophon Team and independent Cathy McGowan will take their places on the crossbench.

The ALP currently has a gender quota of 40% female MPs, with the goal of increasing the quota to 50-50 within the next 10 years. Results from the 2016 election demonstrate clearly the effectiveness of quotas for increasing the representation of women in leadership.

Recently, there has been a push for (and against) setting quotas. Some see the use of quotas negatively, with the notion that “the best candidates for the job” could be overlooked (that is, men will be disadvantaged if women are appointed to fulfil quotas). Others see targets and quotas as effective methods for remedying past wrongs and increasing the diversity of perspectives necessary for good and inclusive decision-making.

We have just published a study in The Leadership Quarterly on this issue. In collaboration with Professor Robert Wood (University of New South Wales) and Professor Sally Wood (University of Sydney), we analysed data from 250 parliaments and legislative bodies in 190 countries about the implementation of reporting requirements, targets and quotas for women.

In the first longitudinal analysis of its kind we compared the effectiveness of reporting requirements, targets and quotas for significantly increasing female representation in parliaments, starting from 1996 to 2015.

Whether you support gender targets and quotas or not, it is difficult to ignore the results we see when they are in place.

What’s the difference between targets, quotas and other strategies?

Equal opportunity strategies have been enforced through legislation that forbids discrimination against women and other demographic groups and grants women the right to vote and stand as candidates for government bodies.

Supply-side or opportunity enhancement strategies — including mentoring, targeted development and networking — were created to increase the supply of women who are job-ready for senior leadership roles. These strategies follow the logic that women were not fully participating in politics because they lacked skill or motivation to do so.

However, the failure of equal opportunity and supply-side strategies to produce acceptable growth in the proportion of women in senior leadership roles has resulted in the adoption of demand-side strategies.

These create a demand for female senior leaders to fill nominated roles and can be broadly grouped into three categories:

(1) Reporting requirements entail disclosing the gender breakdown of senior leadership roles. For instance, on the Australian Parliament’s website there is a page dedicated to describing the present and historical representation of women in Parliament. Similarly, the Inter-Parliamentary Union keeps a historic record and reports on the representation of women in parliaments worldwide.

These reporting efforts are meant to provide governments and political parties with feedback about female representation, which in turn is expected to motivate them to act on it.

(2) Targets set goals for the expected percentage/number of women to either occupy or be nominated for political representation roles, but with minimal or no enforcement mechanisms. For instance, Panama has a target of 50% of women in the lists of nominated candidates for its National Assembly. However political parties are not forced to comply, nor are they penalised for failing to meet the gender target.

(3) Quotas are government or political-party mandated percentages of representation paired with clear enforcement mechanisms (for example, close monitoring and application of financial or operational penalties on political parties for noncompliance). A good example is Belgium, which has a quota of 50% of women in the list of candidates for both houses of parliament. If a political party does not comply with the quota, the electoral commission does not admit their list of candidates.

Targets, particularly in societies where they might challenge conventions or norms, are more likely to be rejected or ignored without a proper consultation and negotiation process and some accompanying consequences. That is how quotas came to be. In practice, quotas are targets with enforcement strategies or sanctions for failure to comply.

Our study set out to evaluate the effectiveness of reporting requirements, targets and quotas to increase female representation in parliaments across 190 nations.

Using a multilevel model, controlling for variables such as the level of economic development, the house (upper versus lower), the number of seats contested, how long each country has had targets or quotas in place, and the focus of the target or quota (that is, reserved seats in parliament versus representation on lists of candidates nominated), we found countries reserving seats for women in parliament and countries with stronger enforcement mechanisms for their quotas had a significantly larger female representation than countries using reporting requirements or targets.

Interestingly, we also found countries using gender targets without any enforcement mechanism had levels of female representation similar to countries that only report their results (see graph below). That is, having a gender target without any enforcement led to similarly low female representation as simply publicly reporting the number of women elected, as we do in Australia. 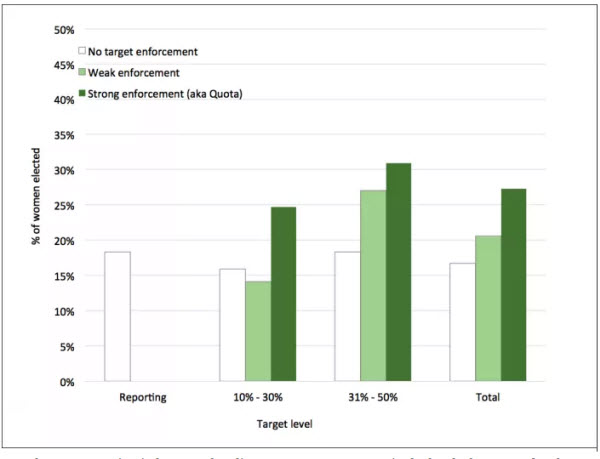 Female representation in houses of parliament across 190 countries by level of target and enforcement.

The results of the 2016 Australian election and our research provide support for the effectiveness of strong, enforced gender quotas for increasing female political representation. The Liberal-National Coalition and other Australian political parties might need to abandon the illusion they are running a merit-based system, from which only the best candidates are selected.

First, women still experience systematic discrimination in society both intentionally and unintentionally, particularly so when they try to enter male-dominated work environments, resulting in negative consequences.

Second, there is no good reason to label a political system “meritocratic” when it is based on the personal/professional connections of the candidates, the factions they belong to, the patronage they get from senior politicians, and the perceptions of their competencies in areas where nobody is objectively measuring their performance.

Finally, individuals using merit-based arguments against quotas may want to consider research that has shown women elected under quota systems have comparable qualifications (and performance levels) to their non-quota counterparts.

Guaranteeing our elected members represent the community they serve is critical for true democracy.

The current makeup of the Australian Parliament clearly indicates more and better efforts are necessary to improve female and ethnic minority representation. A combination of supply-side strategies (for example, Melbourne School of Government’s Pathways to Politics Program for Women), and demand-side strategies (that is, targets with teeth and quotas) are steps in the right direction.

*This article was first published on Pursuit. Read the original article.

A woman’s place is in the House: where are all the female candidates?

Had to laugh at The Drum last night – the subject of “women in politics” came up and the discrimination they face – May’s being childless and therefore “less fit to be UK PM” was specifically referred too?
Of course that “criteria” was nominated by Andrea Leadsom – which didn’t seem worth mentioning?