Malcolm Turnbull begins his term as an elected prime minister with voters unhappy with his performance, while Labor voters have warmed to Bill Shorten, Essential Report shows.

Malcolm Turnbull begins his term as an elected prime minister with his worst approval ratings, while Bill Shorten has narrowed the gap as preferred prime minister, this week’s Essential Report shows. 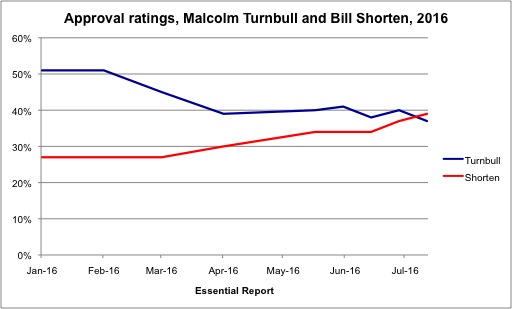 Turnbull still leads as preferred prime minister but his once massive lead is now down to single figures — he leads Shorten by 39%-31%; in December, just 15% of voters preferred Shorten.

A quick look at who has changed their view of Shorten tells the story: Labor voters have warmed substantially to him in recent months and over the course of the campaign. In March, just 51% of Labor voters approved of Shorten’s performance; now 78% do; just 45% preferred him over Turnbull as PM in March; now 73% do. Labor voters have similarly shifted on Turnbull — he fared 42%-36% in approval among Labor voters in January (that is, he had a net approval rating of six points even among people intending to vote Labor), but that began falling rapidly in February; now the comparable number is -66 (13%-79%). Shorten has also doubled his preferred prime minister numbers among Labor voters in that period: after more than a year of misgivings about the party’s leader, Labor voters appear to have decided Shorten can be a winner.

Many voters also expect another election within 12 months: 51% think that’s likely while 28% think it’s unlikely, with little difference between voters: 60% of Labor voters think it likely, as compared to 50% of Liberal voters and 46% of Greens voters. And there’s still strong support for a national vote on same-sex marriage: 60% support it, though that’s down from 66% in March; 25% oppose one. However, there’s been a fall in support for same sex-marriage, down six points to 58% since March, while opposition is up two points to 28%. Liberal voters back same-sex marriage 50%-37%, Labor voters 67%-22% and Greens voters 91%-7%; “other” voters are the only group to oppose it on balance, splitting 46%-47%. As previously, younger voters are far more strongly in support than older voters, who on balance oppose it; 62% of women support it while 54% of men support it.

On voting intention, the Coalition is steady on 41%, Labor is down a point to 36%, the Greens are steady 10% and “others” on 10%, which leads to a two-party preferred outcome of 51%-49% to Labor, up from 50-50 last week. Hang on — why’s that? Labor goes down on primary but up on the two-party preferred? It’s a rare confluence of numbers that gives us an opportunity to explain the role of rounding. The results from Essential, from around 1800 people and then weighted, plainly aren’t whole numbers, so they round them to the nearest whole, but still calculate two-party preferred based on the original numbers, and those results are rounded too (except the election eve result, which we kept to one decimal place). This week, the Coalition’s primary vote fell 0.3 points, which didn’t change its rounded number, Labor’s vote fell 0.4 points, which led to it being rounded down by a point, and the Greens went up 0.5 points, but that didn’t change their rounding. As a result, Labor’s two-party preferred outcome moved from 50.4% to 50.6%, and thus up a rounded point.

Wow. The unintended consequences of Malcolm Turnbull’s eight week election campaign – give your opponent the opportunity for the public to see him in a positive line.

Hanging around Turbott long enough will boost anyone’s appeal – simply by contrast?
….. It works like ‘hanging out with fatter people’ – if you want to look thinner?